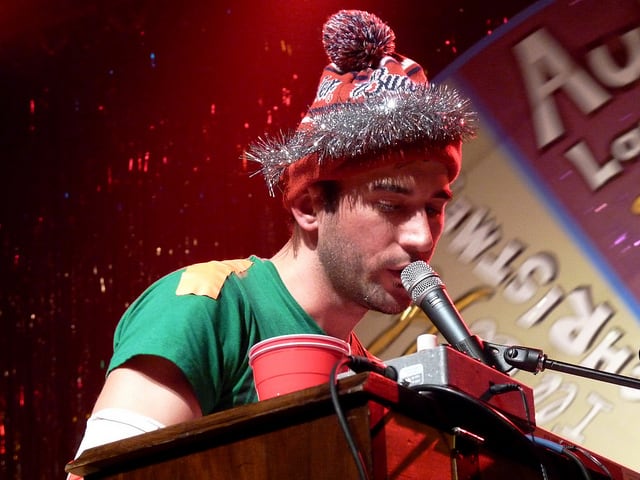 What do hipsters really want for Christmas? Do they dream of turntables, mustache wax and pork belly bánh mì? Or do visions of sugarplums dance in their heads like all other children, even those who don’t know the difference between a pea coat and an ascot?

Christmas is suddenly made cool again in no small part thanks to Sufjan Stevens, who is touring the country and bringing good cheer to the hip and the unhip alike on his tour with the unwieldy name − “Surfjohn Stevens Christmas Sing-A-Long: Seasonal Affective Disorder Yuletide Disaster Pageant on Ice.” Stevens is not fucking around, however, or going the route of irony; he is serious about yuletide emotions, even if some of them are bummers.

The intimate Aladdin Theater quickly filled up with a capacity crowd dressed in Santa hats, folks done up in lights and more than one Christmas Unicorn in homage to Stevens’ latest collection Silver & Gold: Songs for Christmas, Volumes 6-10. The stage was decked out with Christmas paraphernalia, the theater turned into a large ornament. Noel, bitches.

Stevens and his band took the stage a little before 9pm, dressed in tinsel, wearing snowmen costumes, Santa suits and one guy in a chicken outfit. Behind them, a giant wheel of Christmas carols awaited a spin, dictating which song would be next played. The main body of the show alternated between Stevens’ own Christmas tunes and the traditional ones plucked from the wheel once spun by band personnel or audience members. 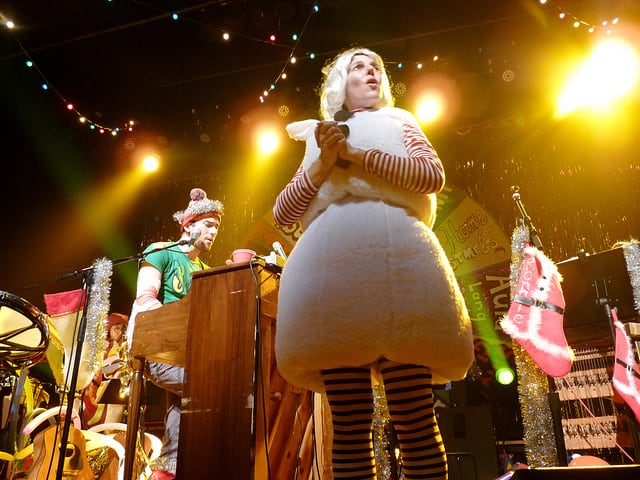 After achieving popularity with his Michigan and Illinoise records, Stevens has retreated from the twee pop that seemed to define him. In the past few years he has taken many left turns, including the brilliant yet willful Age of Adz and now this Christmas concert. His greatest strength is his voice and the concert’s best moments were when he put that breathy instrument to use during quiet songs such as “For the Widows in Paradise, For the Fatherless in Ypsilanti.”

Unfortunately, during the traditional songs such as “Joy to the World” and “Have Yourself a Merry Little Christmas,” Stevens stood back from the mike and let the audience and backup singer Rosie Thomas dominate. Thomas’ nails-on-the-chalkboard voice threatened to derail the show on many occasions, even though she proved capable of singing backup for Stevens on the quieter tunes. “I Am Santa’s Helper” from the new Christmas collection was an absolute shitstorm of noise and Thomas’ shouting, for example.

Stevens saved the best for last, finishing the first set with original “Christmas Unicorn” that then morphed into “Love Will Tear Us Apart.” Moved by the Christmas spirit, Stevens climbed up onto the speakers and shot confetti into the crowd. It was a spectacle to rival a Flaming Lips show and when the band left the stage, it appeared the concert had come to an end.

Then Stevens gave us a Christmas gift. Putting aside his own ramshackle holiday tunes, Stevens reappeared to play a handful of Adz and Illinoise songs, kicking it off with a solo version of “Concerning the UFO Sighting Near Highland, Illinois,” moving to “Futile Devices” and a Thomas- backed “Chicago” before ending the show with a shambolic, full-band take on “Come On! Feel the Illinoise!” It must have been an exhausting, yet cathartic show for Stevens, running more than two hours. The crowd gave him a standing ovation and then lurched out into the night shouting about “Christmas miracles” and likely compiling lists of naughty and nice in their heads.