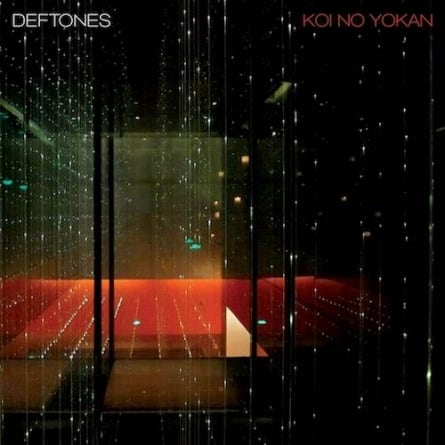 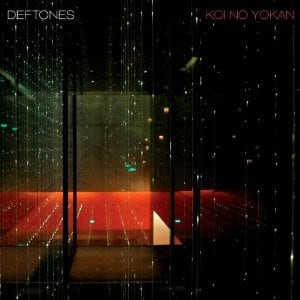 Deftones lead singer Chino Moreno is a romantic at heart. He can scream with the best of metal’s lead men, but his emotional intensity is more often used to express the pangs and reckless bliss of love than to recount the violence inherent in society or the darkness at the heart of the human soul. The title of the Sacramento natives’ seventh full-length record pretty much says it all. Koi No Yokan is a Japanese proverb meaning “promise of love.” The album acts as a set of variations on the theme that the quest to find love ─ the fanatical, overwhelming, uncontrollable kind ─ is at the heart of the human condition.

The Deftones remarkably manage to stay relevant in 2012, despite the fact that they are well into their third decade as a band. Koi No Yokan continues some of the atmospheric tendencies from 2010’s Diamond Eyes, a highly emotional record produced after bassist Chi Cheng fell into a coma following a car accident. The sonic concept of this latest effort is deceptively simple, but interesting subtleties rise to the surface upon multiple listens. The band combines rumbling nu-metal guitar riffs, precise vocals and an overall emo-ish spirit.

Many of the lyrics are direct expressions of plain, powerful feelings (see, “I wish this night would never end” on “Romantic Dreams,” for example). These lyrical expressions put into words certain moments on Koi No Yokan that inspire a feeling of emotional catharsis and surreal disbelief. The ebb and flow of tempos and dynamics on “Entombed,” for instance, suggest indecision of heart. A percussive, repetitive guitar riff near the end of “Rosemary” sounds pessimistically like a machine gun going off or, more optimistically, the beating of a human heart when the object of its affection is near.

Koi No Yokan sustains interest for much of its running time partly because of the counterpoint created between Stephen Carpenter’s raucous guitar and Moreno’s tender, sensitive voice. On opening track “Swerve City,” the two instruments interact in multifarious ways. After a standard metal-riff intro, Moreno’s sharp, crystal-clear voice enters. Moreno and Carpenter trade phrases back and forth throughout the tune. The juxtaposition of the muddy metal guitar and the warm, welcoming vocals makes one think of the simultaneous feelings of pleasure and confusion that often come with love.

Of course, this scheme is nothing new. Deftones have been writing songs as studies in contrast for some time. They have mastered the art of quiet-verse, loud-chorus so thoroughly and have repeated it so often that they could be accused of lacking imagination or originality. Indeed, Koi No Yokan breaks no new ground. It’s not likely to recruit any new fans that aren’t already on the Deftones bandwagon. But, it’s especially difficult in the metal genre, one that is so often a victim of its own stereotypes, to remain this consistent and vital for so many years. As long as the Deftones continue to create melodies this catchy and express feelings this real, they deserve to be heard.