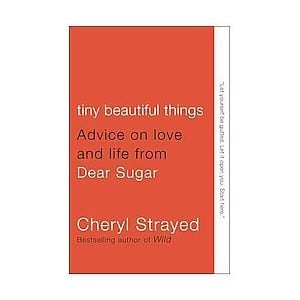 This November during election night, while waiting for Mittens and Obama to give their speeches, the news anchors passed the hours by reflecting on mind-numbing minutiae. Electoral College statistics, the demographic makeup of Ohio as evidenced by the latest census, that sort of thing. And one of the no-one-cares topics brought up was the discussion of which texts members of Congress would be sworn in on. There was the sea of Bibles, the occasional Koran and Torah, and now some sacred Hindu docs. What would I be sworn in on, I pondered, and the crazy-person answer first to snap off in my head was “Tiny Beautiful Things!!” It may sound insane, but the answer is not much of a stretch. Cheryl Strayed’s book of wisdom, collected from her Dear Sugar column persona, contains lessons from the school of Love More and Be Better thought. It’s not a religion, but it should be. This is the book I’ve bought for every friend this year who has been hurt, angry, betrayed, belittled, confused, depressed or conflicted (I’ve given away a lot of copies). Strayed’s mini-memoir essays of grace by trial and error make us feel less alone in this world of anonymity and distant contact, and offer a decidedly non-saccharine hope that we can all grow into bigger, humbler, kinder versions of ourselves. – Tabitha Blankenbiller 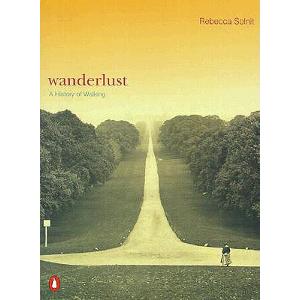 Wanderlust: A History of Walking by Rebecca Solnit (Penguin/2001)

I first encountered it as a footnote in another, less fascinating book on transportation infrastructure. Stranded amid exposition on what makes for pleasant pedestrian experiences was “Solnit, Rebecca. Wanderlust: A History of Walking.” When the book was first published 10 years ago, the automobile’s supremacy seemed irreversible. Since the Great Recession gutted VMT, bike share systems have sprouted up and generational interest has turned inward, away from suburbs and rural areas, toward America’s cities, that century-old iron grip seems to be slackening. Any treatments, such as Wanderlust, of this most ancient form of travel seem to become even more useful as the mode passes back into vogue.

As a lifelong perambulator and proud member of the unwashed, car free masses of modern urbia, Solnit’s tracing of bipedalism’s path along anthropological, literary and socio-political lines seemed a natural fit for me as a reader. But what arrested attention was Solnit’s measured prose and deep focus, allowing her to pull readily from a myriad of fields and her own experience as a peace activist marching for nuclear disarmament. Several of history’s great peripatetics (Dickens, Whitman, Wordsworth, Thoreau and John Muir, East Asia’s itinerant poets and the West Coast’s own wandering versifier, Gary Snyder) make appearances. Solnit also touches on the relation of walking to being a woman and explores at depth the familiar notion that a story or piece of literature is a form of trek or journey, that “reading is traveling” (and not simply in the sense of travelogue, Ulysses or The Hobbit) and “a sentence is likewise a road.” “Exploring the world is one of the best ways of exploring the mind, and walking travels both terrains,” Solnit writes. No book better traverses the diverse subjects a discussion of walking can stumble into, and does so with beauty and ease. – Joe Clinkenbeard 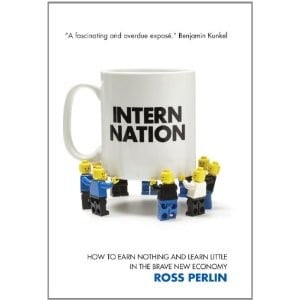 As readers, we occasionally stumble on a book that speaks as much to our personal and spiritual interests as to our literary ones. This year, at the confluence of the political uncertainty, invective rhetoric, burgeoning activism and youthful hope of early 2012, I found myself engrossed in Ross Perlin’s Intern Nation. I reviewed Intern Nation for Spectrum Culture and found it as fascinating as alarming, appropriately good-humored in the face of egregious injustice. I caught myself talking about it to anyone who would listen, and more importantly, citing it in seemingly unrelated conversations about poverty and unionizing. Indeed, it is an exciting and thoroughly researched treatise that touches on higher education, student debt, labor rights, class mobility, income and poverty; entry-level jobs have been corrupted everywhere from Disney Land to Capitol Hill. And yes, Perlin’s book confirms all of your niggling doubts about unpaid internships.

To his great credit, the author does not vainly dwell on the deep intersectionality of his research. He focuses on the matter at hand and, along the way, points in the directions of more familiar causes that inform the state of modern interns. Regulating internships is not “the next” labor movement; it is a logical extension of the one that has continued since early industrial America. With Wal-Mart workers and fast food staffers striking in the latter half of the year, 2013 may offer a groundswell of public support for labor protections that can carry interns with it. Young people, parents, hiring managers and Secretary of Labor Hilda Solis herself should read this book. – Katie Bolton 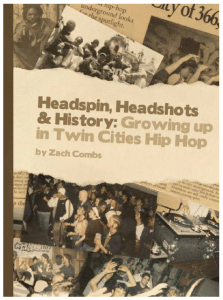 It’s hard enough to find a decent book on the subject of hip-hop, let alone an excellent one. With store shelves full of cultural studies majors exploiting overzealous “I wanna be down!”-types with hardcover editions of their shitty “rap is poetry” thesis, finding a quality book-length rap read is an incredible feat. 2012 has fortunately had several, with my personal favorite being Zach Combs’ Headspin, Headshots & History: Growing Up in Twin Cities Hip Hop. Instead of merely being the story of one man’s journey through hip-hop, it’s the history of an entire largely-undocumented hip-hop scene augmented by the personal touch of Combs’ adventures amidst its chaos. While some of the names he mentions may be familiar, Combs’ diligent record keeping and never-before-heard anecdotes make for one of the most refreshing music books in years. Featuring everything from the major crews, important locations and history-making moments to the rap battles, concert mishaps and MTV’s interaction, no stone is left unturned and no ripple effect is left unanalyzed. Yet despite the book’s tidal wave of information, Combs’ undeniable charisma as a writer keeps things from becoming daunting and gives Headspin, Headshots & History all the fun of drinking a cold one with a particularly knowledgeable hip-hop head. It’s everything a profile of a music scene can and should be. – Chaz Kangas 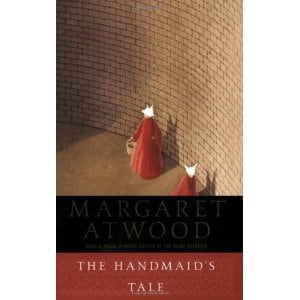 The Handmaid’s Tale by Margaret Atwood (McClelland and Stewart/1985)

I’ve always been a rabid consumer of dystopian fiction. As a high schooler I remember having my mind blown first by Orwell’s 1984, then later by Huxley’s Brave New World, each causing me to question the methods and goals by and for which our society is organized. As I read it, I couldn’t help but wish that I could go back in time and give my teenage self a copy of Margaret Atwood’s brilliant The Handmaid’s Tale, which deserves its own spot in that canon. The novel paints a chilling picture of an America whose future is hijacked into totalitarian theocracy called Gilead. Amidst the specter of civil war and environmental collapse, conservative Christians create a harsh patriarchy wherein women are property, public literacy is outlawed and gays, dissenters and racial minorities are sent off to die.

The book’s warnings against sexism and intolerance felt especially relevant in election this year as women’s bodies once again becoming a political battleground. For anyone paying attention to Rush Limbaugh, Richard Mourdock or Suzanne Venker, it’s clear that Gileadian views regarding the dangers of women controlling of their own sexuality, reproduction and economic agency still hold disturbing currency in modern America. The Handmaid’s Tale directly counters these assumptions while reminding us how social oppression imprisons not just those without power but also those who hold its reins. The writing is insightful and cutting in its political and sociological implications but also deeply evocative and tender in its portrayal of characters struggling to retain humanity despite inhuman circumstances. By imagining people living by their most frightened, reactionary impulses, Atwood’s book reminds and inspires us to live bravely and with fierce compassion. – John M. Tryneski 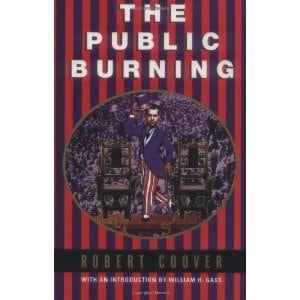 Would it be terribly uncouth to begin this celebration of Robert Coover’s great political/historical novel The Public Burning with a graphic spoiler of the disgusting event that occurs in its final pages? I refer not to the execution of condemned “atom spies” Julius and Ethel Rosenberg, the climactic travesty to which Coover builds with increasingly hysterical excesses, which would hardly be a spoiler for anyone with a passing knowledge of 20th-century history. No, the spoiler I want to drop constitutes the book’s denouement, and I offer it as a litmus test for readers to determine if they are on board with this novel’s departures from historical reality and its grotesquely fanciful conceits. Folks, I feel just as weird typing these words as you do reading them, but here goes (and the spoiler-sensitive may avert their gaze): the best book I read this year concludes with Uncle Sam himself – a folksy, profane, immensely powerful metaphysical personification of America’s oldest metaphor for itself – forcibly sodomizing then-Vice-President Richard Milhous Nixon.

Still with me? Coover was part of the original generation of postmodern fiction writers; in this wild masterpiece he got lost in the funhouse of postwar paranoia, matching the horrifying lunacy of the Red Scare with a sustained frenzy of stylistic and narrative lunacy. Working from a baseline of historical truth – the Rosenbergs were in fact executed, despite an absurdly flimsy case by the prosecution, to alleviate the public’s (and the government’s) crazed fear of Communism – Coover piles on one bizarrely inspired conceit after another. There’s the aforementioned Uncle Sam, who transubstantiates into the body of each U.S. President and influences government action with his Yosemite Sam-esque rhetoric; there’s the eponymous publicity, with the executions taking place as live entertainment in Times Square; and there’s Nixon as an arrogant but brilliant narrator, seeing all the angles of the case, drawing parallels to his own life, and even falling in love with Ethel Rosenberg. The result is a political cartoon that transcends satire – a ferocious, depressing and hilarious vision of America at its worst and American literature at its best. – Brian Wolowitz