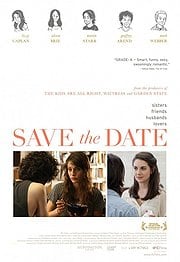 [xrr rating=3.25/5]Save the Date is a movie most successful in its quietest moments. That’s not to say that it’s not compelling as a story, but its most powerful moments don’t come through narrative drive or dramatic moments. Rather, it’s most intriguing when its characters are saying little, but, without a doubt, feeling; of course, it helps that nobody in the movie ever seems quite certain what they should be doing or how to go about doing whatever that is. But as the film subtly states, that’s the price of being young and willing to love in this day and age.

Ostensibly, the lead of Save the Date is Sarah (Lizzy Caplan), a Los Angeles artist and bookstore employee about to be proposed to by longtime musician boyfriend Kevin (Geoffrey Arend). After a mistimed mid-concert proposal goes awry, the two separate, but the action of the film is really in the complicated ways we make connections with other people. Sarah and Kevin deal with their break up in different manners, but it mostly comes down to alcohol and sex, which is understandable enough. Combined with the low-burning tension implicit in Sarah’s sister Beth (Alison Brie) and Kevin’s bandmate Andrew’s (Martin Starr) upcoming wedding, Save the Date is really more of an ensemble drama with moments of levity.

After Sarah becomes involved with Jonathan (Mark Webber), a bookstore customer with a longstanding crush on her, the film inevitably becomes “How will she drive him away?” At the very least, it’s an interesting turn to see the female lead of a film have the typical behavior of a romantic comedy male in the sense that she seems to deliberately sabotage relationships and express difficulties with commitment, despite that both Jonathan and Kevin are legitimately decent fellows. Similarly, the quietly increasing unrest between Beth and Andrew has moments of heartbreak, with two people that clearly love each other coming to conflict over issues that are important to each but don’t quite overlap in the way that they want them to.

The biggest fault of Save the Date is that it’s frankly a low-stakes drama. At the end of the day, it’s about pretty people having problems dating with minimal issues meeting romantic ideals or having good sex. That’s not a knock per se; if anything, it’s remarkable that the four primary characters are so emotionally engaging considering that they have little outward conflict or drama. The film largely succeeds on the charm of its leads (which is considerable) and the intimacy of their problems. Even the ending is somewhat frustratingly open-ended, but it’s completely suited to the story told up until then. It’s a film that doesn’t offer answers, just sympathy.