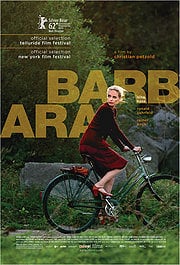 [xrr rating=4.0/5]Art plays a recurring role in Christian Petzold’s East German drama Barbara. A passage of The Adventures of Huckleberry Finn offers a tantalizing escape scenario for a young girl (Jasna Fritzi Bauer) who wants to get out of a labor camp. An analysis of Rembrandt’s The Anatomy Lesson of Dr. Nicolaes Tulp delves into its focus on the scrutinized cadaver as a clear metaphor for the titular protagonist’s (Nina Hoss) own surveillance after submitting an application to leave the German Democratic Republic for the West. The detailed critique acknowledges the inaccuracies of Rembrandt’s painted hand but argues that the painter is as led astray by dated anatomical handbooks as the doctors he portrays staring at those unseen pages in the corner of the canvas. In other words, they may be wrong, but them’s the rules, as it were, just as the Stasi spy on this benign doctor solely because such surveillance is required for anyone wishing to defect.

Hoss wears a constant nervous frown when her character arrives in a small northern town at the start of the film, transferred out of her prestigious job as a physician in Berlin as punishment for her desire to leave the GDR. Assigned to pediatric surgery at the local hospital, she generally speaks only when spoken to and initially avoids her new colleagues, aware that the Stasi will have ordered at least some of them to report on her. She only interjects for matters related to her job, such as when she voices opposition to the head of the hospital, Dr. André Reiser (Ronald Zehrfeld), when he dismisses the admittance of Stella, the aforementioned 14-year-old trapped in a hard labor camp, for her history of faking. Barbara steps in, makes a few observations and accurately diagnoses the girl with meningitis. It is the first, crucial demonstration of the woman’s commitment to her moral duty, a drive that could put her in even more peril.

Petzold’s direction eschews some traditional thriller tics, trading invasive close-ups with the long shots that better communicate the sense of being watched at all times. Shots typically remain on a tripod, the camera panning or tilting to follow movement while remaining in the same spot. This has the air of a trained secret policeman, finding a vantage point from which to scan the action and only moving when necessary so as to stay inconspicuous. Occasionally, Barbara manages to slip away from prying eyes into secret areas where she can pass messages along a network to her lover in the West. The roaring wind that typically comprises the entire soundtrack for these shots is strangely comforting: it is the sound of microphones being drowned out, of surveillance deafeningly interrupted. That brief respite ends whenever Barbara makes her way back into town after nightfall, the eerie silence of idle neighborhoods and the encasing amber of streetlights trapping her once more.

Hoss attempts to match the frigid movements of the watching camera, making no sudden movements and generally walking with her limbs tucked in to reduce her profile. Yet Barbara continually has to make choices of trust and aid that compromise her inconspicuous body language. Already under scrutiny, she takes a great risk by even tending to the rebellious youth Stella at all, much less by forming a subtle but clear bond with the girl. Barbara’s frosty treatment of Reiser slowly warms despite his ideological loyalty. Zehrfeld’s performance gives a shade of ambiguity to his dialogue, his earnest face mixed with a sense of weary experience to both bolster and undermine his patriotic loyalty. This contributes to the suspense of his interactions with Barbara, in which Reiser’s pleasantries can be read equally as genuine romantic interest and/or ingratiating attempts to lower her guard and get her to reveal a juicy tidbit for the secret police.

Petzold never oversells these moments. He lets a conversation hang in their air just long enough to introduce doubt, but not long enough to do the work for the audience. Every choice Barbara makes is felt because Hoss does not betray the wracking terror that surely involves all of her major decisions. Brief flickers of reflection mark Barbara’s biggest giveaways, but the resolve with which she carries through her choices makes those flashes of worry even harder to spot. The film’s conclusion is similarly inconclusive, split so completely between a sense of great moral victory and surrender that it provides neither closure nor resignation even though it contains both. On paper, Barbara sounds like a thriller more than the drama that it is, yet this most dramatic moment, a tranquil, contemplative, dubious ending, may be its most suspenseful moment of all.