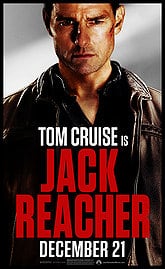 [xrr rating=1.75/5]Tom Cruise remembers the ‘80s, and it seems he hopes you remember them too. Why else make Jack Reacher, a B-level action movie about a mysterious drifter who turns up in Pittsburgh to solve a crime? But what is Cruise, an A-list star who should be doing A-list material, doing in a movie that could have easily starred Rutger Hauer or Charles Bronson 30 years ago? And with the national dialogue open about gun control, is it really the right time to be enjoying a film about a sniper who hides out in a parking garage and picks off five innocent people minding their own business outside of PNC Park?

The name “Tom Cruise” just exudes smarmy masculinity, and that is basically all there is to his character in Jack Reacher. He blows into town to investigate the crime with nothing more than his fists and the shirt on his back. We learn that Reacher is ex-military, but he is nothing more than a ghost, that shadowy notion of quiet manhood that Clint Eastwood and David Carradine perfected years ago. Women swoon at his appearance. He’s virile, violent and very angry.

Adapted from One Shot, one of many books in Lee Childs’ series featuring the character Jack Reacher, the film skimps by on charm as Cruise (who also served as producer) and writer/director Christopher McQuarrie don’t really take things too seriously. When Reacher realizes the accused sniper (Joseph Sikora) may be have been set-up, he stumbles into a world of incompetent meth heads, double-crossing officials and a massacre that may have seemed random, but was very well intentional.

At Reacher’s side is the sniper’s defense attorney, Helen (Rosamund Pike), who hires the investigator to help her case before inadvertently stumbling into a much larger conspiracy. Like Richard Jenkins who plays her district attorney father, Pike is given very little to do here. But are you surprised? In the world of Jack Reacher, it’s the men who get things done.

But the men behind the picture do just the bare minimum to make it interesting. It’s not a big reveal that the sniper is just a patsy, and soon we meet the men behind the shooting, including Werner Herzog as a fingerless man (he bit them off in a Siberian prison camp) known as the Zec. Since even hearing Herzog read Go the Fuck to Sleep is a hoot, his appearances (along with Robert Duvall as a grizzled, yet kindly gun store owner) elevate Jack Reacher beyond the reaches of mere trash.

It’s amazing that Tom Cruise can command millions upon millions of dollars and still look so asleep in a role. He delivers all his lines in a flat, monosyllabic clip. Maybe that’s manly, but I find it dull. “It’s what guys like me do,” he mutters at one point in the film. Well, guys like me give shitty films a bad review.

As for the opening sequence, it’s pretty hard to watch innocent people get gunned down, and Jack Reacher has the bad luck of opening when the country is still in full mourning over the Sandy Hook Elementary and Clackamas Town Center massacres. Now isn’t the time for it, no matter how silly the film. Go enjoy the holidays with your family. That would be the truly manly thing to do.