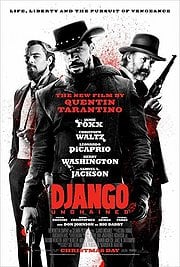 [xrr rating=3.75/5]Twenty years after his debut, Reservoir Dogs, Quentin Tarantino shows no particular sign of easing back on his distinctive, flashy style of filmmaking. And why would he? His retro-experimental collaboration with cinematic soulmater/BFF Robert Rodriguez, Grindhouse (2007), aside, even his least regarded film, Jackie Brown (1997) was still a commercial and critical success, and he has consistently remained one of the most prominent and influential working directors around. It should be no surprise, then, that Django Unchained is everything that you’d expect from Tarantino: verbose monologues, hyper-violence and pop culture references aplenty.

On the other hand, its subject matter is potentially controversial in a way that Tarantino rarely is. Loosely inspired by the 1966 spaghetti western Django, which had a reputation as one of the most violent movies yet made in its day, Tarantino substitutes a different Django for Franco Nero’s (who has a cameo here) Italian drifter: a pre-Civil War slave separated from his wife Hildy (Kerry Washington) after a runaway attempt. After being released from slavery following assisting bounty hunter/retired dentist Dr. King Schultz (Christoph Waltz) in tracking down several targets, Django sets out to find his wife, who was sold to “Candyland,” a legendarily harsh plantation headed by Calvin Candie (Leonardo DiCaprio). In the meantime, Schultz and Django form an increasingly warm partnership, with the German taking a responsibility for training the freed slave in the methods of, as he puts it, “selling corpses for money.”

Considering the flack Tarantino has received in the past for his scripts’ liberal use of a certain racial epithet and the possibility for offensive portrayal of pre-Emancipation Proclamation racial relations, he may be facing a storm soon. But I’m a film critic, not a culture warrior: so I’ll only say this: while Django Unchained does not shy from examination of the ramifications of racial prejudice and slavery, it’s not the film’s focus. So what is? Lots and lots of gory, frequently hilarious action.

Yes, for all of the serious subject matter at play, Django Unchained is actually one of Tarantino’s funniest films yet. It sounds like a difficult thing to say about an action movie concerned with human slavery, legal murder and gunshots so bloody that gore literally coats walls at time, but there’s a thankful amount of levity included. In particular, a masterful scene in which the logistics of a lynch mob are debated is shockingly funny, particularly when framed by hoods and burning torches. It’s a tricky stunt to pull off, which has as much to do with the talent of the cast as it does the director.

As Schultz, Waltz makes the most of his character’s geniality in even the most desperate circumstances; it’s something of a complementary role to his breakthrough performance as Hans Landa in Inglourious Basterds, but using that same Teutonic affability for sympathy rather than intimidation. Of course, it’s not difficult to find the one non-racist Caucasian in the world to be the good guy, but Tarantino makes it a little more difficult with the title character himself. Not because it’s ever in doubt that Django is the protagonist (I mean, it’s right there in the title), but in the first few scenes of the film, Foxx comes off surprisingly blank. Initially, Django is mostly silent and more of a reactionary character than an active one, which makes the first flashback to Django and Hildy attempting to flee captivity, full of panic and emotion that much more jarring. As the story goes on and Django grows more confident and used to his role as a bounty hunter, he grows increasingly vocal and dynamic.

One of the primary, largely unspoken themes in Django Unchained is the difference between outward action and the way we behave in private. Most obviously, we see this through Schultz and Django’s initial hunting, in which the latter is told to “act” as valet to the doctor and never to “break character.” But even more so, we see it in the way that Django is uncommunicative and silent when first interacting with Schultz, but affectionate and emotive to his wife when no slave owners are about; it’s a realistic depiction of the way subjugated people might behave for fear of reprisal and to keep expectations of their intelligence and strength low. And though it’s best not to speak too much of his role in Django Unchained for spoiler reasons, it’s Samuel L. Jackson that best epitomizes this. Suffice it to say that it’s one of the most impressive roles of his long career, one that he pulls off with shocking subtlety as kind of a dark parallel to the partnership of Django and Schultz.

Django Unchained is not without its flaws. In fact, it’s got quite a few. For starters, it’s excessively overlong, clocking in at nearly three hours. While the case could be made that the director’s fondness for dramatic, slow-motion scenes pads out the time and some of the quieter scenes showcase beautiful nature backdrops, there’s just not enough to story to justify the runtime. As with Mike Myers’ distracting cameo in Inglourious Basterds, Tarantino’s tendency to fill in small roles with highly recognizable faces tends to knock a viewer out of the action for little to no reason. While several choices are spot on (Don Johnson as a Kentucky Colonel-type plantation owner is fantastic), it grows frequently wearying. Specifically, one of the funniest scenes of the film is nearly ground to a halt by the casting of Jonah Hill as a generic henchman to no purpose, and the unsurprising appearance of Tarantino himself in a small, late role is just…well, it exists in the film, is the only way to put it.

But more than anything else, what knocks Django Unchained just below the ranks of Pulp Fiction and Inglourious Basterds in Tarantino’s oeuvre is the lack of a truly outstanding set piece scene, like the diner scene of the former or the basement tavern of the latter. Tarantino films are made or busted by his ability to ratchet up the tension in a single scene that hangs the story together, and while there’s several excellent examples in his newest film (perhaps best of all a dinner table explanation of phrenology), there’s not a truly transcendent one. And that’s perhaps the best way to think of Django Unchained: excellent, but not transcendent. It’s a Tarantino movie in the only way he knows how to make them, which is skilled, dense and sometimes a little too self-indulgent.