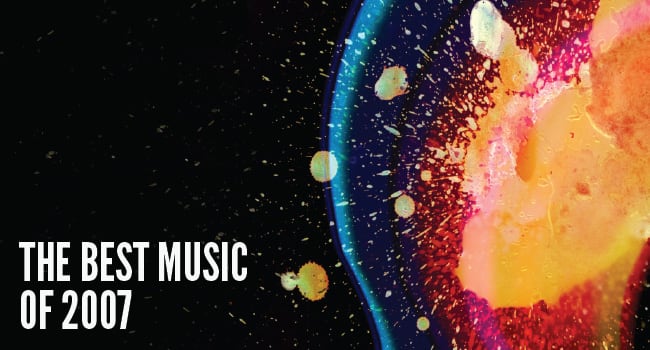 Five years is an eternity in the life of a record. When coming up with this feature, the question the Spectrum Culture staff pondered was this: “How well do these albums play NOW!” Not five years ago, but how have they aged in our memories. While some acclaimed albums of ’07 remain strong on our list, some critically-lauded ones didn’t have the staying power. This list is designed to give new perspective on things five years old. Thank you so much for reading! 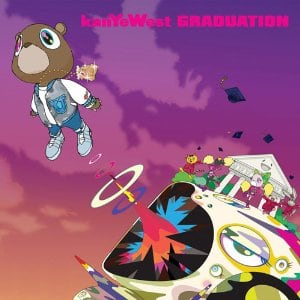 It says a lot about Kanye West’s stature as an artist that even what is arguably his weakest album—don’t you dare say 808s & Heartbreak!—is still an essential, culture-defining collection of music. And the irony is that Graduation is perhaps also his most influential. The College Dropout is too personal, Late Registration too expensive, 808s & Heartbreak too niche-experimental, and My Beautiful Dark Twisted Fantasy too brilliant. From the cover (which features a design by Japanese artist Takashi Murakami that fits nicely into the dominant culture-as-capital aesthetic of contemporary American music, particularly hip-hop to the choice of samples (“Stronger” adapts Daft Punk to hip-hop’s syncopation and the Can interpolation of “Drunk and Hot Girls” foreshadows the King Crimson-sampling prog-hop of “Power), Graduation captured the zeitgeist while simultaneously creating it.

And in “Can’t Tell Me Nothing,” the album’s simplest but also best song, West distills his own sui generis swagger into something accessible and replicable by anyone, all in the span of a few words: “Wait ’til I get my money right / Then you can tell me nothing, right?.” In these two lines, the indelible link between wealth (and, hence, also power) and self-worth (so often mistaken for confidence) is drawn, an obsession that will occupy West’s work over the course of the next half-decade. In retrospect, it seems, then, that West’s own habit of near-blasphemous megalomania (“I told God I’d be back in a second“) was his own way of dredging up its inverse, the deep pain of being black in a world that tends to only respect patterns of behavior associated with whites and also of never having enough in a society that defines success by competitive acquisitiveness. The fragments of this magic formula that would define hip-hop’s greatest achievements of the next five years are found in previous works by West, but it was on Graduation that the mold was truly set. Refrain from calling it groundbreaking only because every other thing he does also seems to be. – Trevor Link 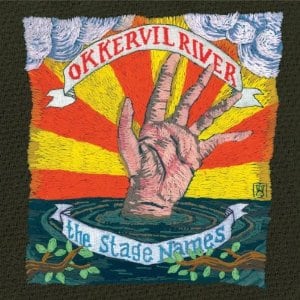 Nothing from 2007 punched as hard or in as calculated a manner as Okkervil River’s fourth LP The Stage Names. The preceding Black Sheep Boy was 2005’s out of bounds underdog, a dark and rocky parable that while ostensibly an interpretation of folk musician Tim Hardin’s life, most closely paralleled the work of a major influence on guitarist-vocalist Will Sheff – Neutral Milk Hotel’s Jeff Mangum. But The Stage Names saw Okkervil River snip away Black Sheep Boy’s unhinged insularity, trading its doomed shuffle for a shifty, restless narrative draped over nine tightly-wound tracks. In a narrow arc, Sheff’s speaker takes on and discards numerous identities – pop star, forlorn lover, petulant child, slave to the stage, to the craft, the exultations of holding audiences rapt. The result is, however self-contained and disjointed song by song, cohesive as a record – more so than the shambling, muddled letdown that was another anticipated 2007 release, Arcade Fire’s Neon Bible.

Perhaps befitting its name, The Stage Names is rife with reinvention: an old fable (also the name of an R.E.M. cut) fits into “Plus Ones,” and the Beach Boys’ “Sloop John B” is twisted into a gurgling parting salvo on “John Allyn Smith Sails.” “A Hand to Take Hold of the Scene,” in breathless cadence, contains stunning lyrical turns (“And as he speaks his last line a thought falls from his mind/ And I pick it up right through the TV”). “Unless It’s Kicks” and “You Can’t Hold the Hand of a Rock and Roll Man” channel punkish fervor into big band sing-alongs. And the yawning “A Girl in Port” is the apex, “soft and swaying” yet the hinge on which the denouement – particularly the hoarse, throaty drama of “Title Track” – swings. Like an impatient metronome, the clicking guitar stutters that usher in Sheff’s howling on wounded star ode and album kickoff “Our Life Is Not a Movie or Maybe” is the kind of introduction that sticks fast in the mind. But what follows on The Stage Names is, though not as instantly contagious as that, still as raw and forceful today as it ever was. – Joe Clinkenbeard 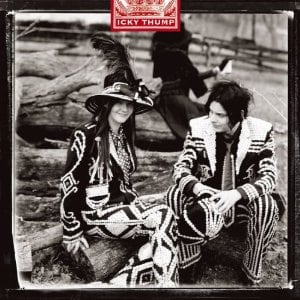 At the time of its release, Icky Thump sounded like a return to form for the White Stripes after the left turn that was Get Behind Me Satan. Of course, given their impending breakup has since become a de facto summative statement, showing that the Stripes were still able to push their sound forward without losing their ability to create bone-crushing rock.

For much of the record, Jack and Meg White are content to just crank up the amps and pound out heavy hitters like “Bone Broke,” “Little Cream Soda” and “Catch Hell Blues,” which could find homes on almost any of the Stripes record – but that’s not all they do. The band’s creative restlessness can been seen throughout the record whether it’s playing with bagpipes or turning an old Patti Page song into a mariachi freak-out. On the title track, Jack manages to up his lyrical game by somehow turning a story about being robbed by a Mexican prostitute into an excoriation of US immigration policy. “Rag and Bone,” with its impish play-acting and wall-rattling choruses just oozes irresistible charm and “You Don’t Know What Love Is (You Just Do As You’re Told)” might be the most radio-friendly single in the entire White Stripes catalog.

Though we didn’t know it at the time, Icky Thump ended up being the White Stripes swansong, which is probably a good thing. Never ones for making simple statements as scrutable as “goodbye,” it was better for everyone not knowing. Ultimately the Stripes went out the way they came in – loud, loose and full of life. – John M. Tryneski 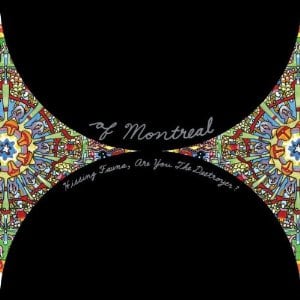 7. Of Montreal – Hissing Fauna, Are You The Destroyer? [Polyvinyl]

Sometimes emotional strife is exactly what a stable and creatively static artist needs to evolve their sound. Then again, that kind of change comes as a pretty shocking surprise when the artist undergoing such a dramatic transformation is Kevin Barnes and his relentlessly youthful early years Of Montreal.

A separation from his wife prompted Barnes to write Hissing Fauna, Are You the Destroyer?, his introspective take on the breakup album. Of Montreal trades the psychedelic pop melodies of their earlier years for a brand of giddy space-funk-folk freak-out that dominates their music to date. Five years down the line its obvious this transformation was basically a permanent one, the back half of Hissing Fauna debuting Barnes’ black transsexual alter ego, Georgie Fruit, a musical identity that pops up all over Of Montreal’s later records.

At the time, Fruit’s emergence represented Barnes’ carnal and emotionally honest portrayal of a post-breakup sexual bender, a refreshing alternative to sad-sack songs drenched in self-pity. The whole album reveals a deeply hurting individual working through the stages of grief, self-misery conveyed by frank lyrical angst that highlights the narrator’s many fresh psychological cracks. He uses all 12 exhausting minutes of “The Past Is a Grotesque Animal” to vent and mourn and condemn himself for thinking about it too damn much, jettisoning his outward signs of trauma before hitting the club, projecting Georgie Fruit’s comic levels of confidence, and strutting over sex-drenched backbeats and synths.

Hissing Fauna, Are You the Destroyer? continues to be interesting listen after listen because Barnes’ exploration of this shift is so visceral, but also because the pop, funk, electro and disco here is all so good. Of Montreal is at its best mixing perfect pop songs with carefully scripted neurosis. – Michael Merline 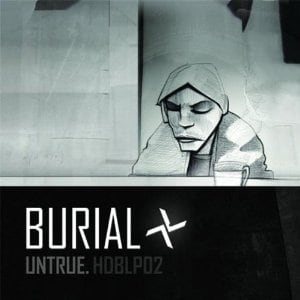 There’s almost something blasphemous about referring to Burial’s superlative sophomore album Untrue as “dubstep.” In the five years since its release, knob-twiddlers whose monikers sound like they were lifted from industrial-strength cleaning products have bastardized the subgenre into the onerous “brostep” that all the kiddies love today. But in 2007, we didn’t even know Burial’s true identity (the reclusive William Bevan), much less that dubstep would dig itself into so lame a hole. That may be why Untrue, a brooding follow-up to Burial’s stone cold debut, has actually risen to greater importance now than it did upon its critically-acclaimed release.

Untrue is an album that seems to exist outside of time. While I’ll always identify it with where I was when it first left its mark on me (a pre-dawn walk toward a train station through a blinding snowstorm in downtown Chicago), Untrue also transcends time and space. Burial’s beats are manipulated in such a way that the listener can never latch onto a specific groove, as the rattling drumbeats stop and start without warning, and the music swells and recedes when it wants to, not when it’s supposed to. No need for a formulaic bass drop when your vibe is already subterranean. The warped vocals emote more than clearly articulated words ever could, and Bevan purposely recorded on lo-fi equipment to highlight an almost visceral crackle and hiss that lingers throughout this twilit record.

Though we’ve been blessed by several EPs in the five-year interim since 2007, Untrue is the most recent full length Burial album to come our way. But given how it lurches and drifts, jangles and hums, and altogether defies classification, Burial’s savvy second record will continue to live on long after today’s flash-in-the-pan dubstep is six feet under. – Josh Goller