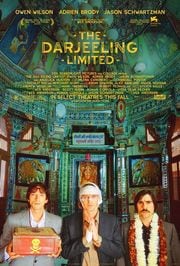 The Darjeeling Limited was never universally loved. The film garnered a 67% on Rotten Tomatoes, which feels unreasonable given that all other Anderson films (with the exception of the tepidly-received The Life Aquatic) have an 80% fresh rating or higher. Negative reviews overused the word “limited,” an easy reference to the title, to describe an allegedly emotionally void, overtly stylistic, and poorly executed film. Perhaps an initial viewing of the film does, indeed, give the impression that The Darjeeling Limited is a series of hollowed-out Andersonian tropes, set in an exotic environment to make up for its flaws. But in retrospect, even only five years later, the film marks not only a major milestone for the director’s trajectory, but one of his best works.

The Darjeeling Limited achieves, more so than any other Anderson film to date, a newfound dexterity with narrative pacing that the director has frequently grappled with (second- and third-act inertia tends to enervate many of his previous works, particularly Rushmore). The narrative, stuck solely and resolutely to the petty, childish sibling feuding of three brothers Francis (Owen Wilson), Peter (Adrien Brody) and Jack (Jason Schwartzman), as they are reunited in a strange land (India) for the first time since their father’s funeral, is allowed to breathe, ferment, and mature into an organic familial dynamic that is at once both immediately identifiable and hilariously embellished. Their jejune quarrelling is one of Anderson’s most adroit representations of tragically comic man-child behaviour, perhaps because this Andersonian character motif is projected into three unique but complementary characters, bound by brotherly blood.

The most important scene in the film, however, does not happen during their many train-constrained tiffs or attempts at spiritual awakenings. It emerges between the second and third act: a flashback as the three brothers unsuccessfully try to attend their father’s funeral. It is such a greatly scripted (and performed) character development supplement that lends emotional gravitas for the final act, in which the brothers finally meet their mother after many years. – Tina Hassannia 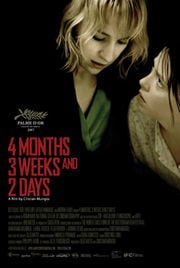 In the same year as Juno, the cute, cuddly Diablo Cody-penned indie comedy, hit the screens, Cristian Mungiu gave us a very different story about another young woman facing an unexpected pregnancy. As lighthearted as Juno is in tone, 4 Months, 3 Weeks and 2 Days is dire. We watch in virtual real time as the young college student Gabita (Laura Vasiliu) finds a way to terminate her unwanted pregnancy in late 1980s Romania. This is no easy task. Her roommate Otilia (Anamaria Marinca) goes above and beyond the call of duty to help her friend, raising money for the abortion, making reservations at the seedy hotel where the friends will meet the abortionist and, ultimately, exchanging sexual favors for the procedure.

Looking at this film again five years after its initial release, it’s striking how subtle and complex it still comes off both stylistically and thematically. The movie’s cultural context, the oppressive rule of Ceausescu, forms an essential backdrop to the story, but it never becomes overly political. The film consists of mostly scenes comprised of one shot only. The sense of stark reality matches the desperate situation the young women find themselves in. There is no music to tell us how we are supposed to be reacting emotionally to the action, so at times we are left only with the silence of the friends’ quiet voices. Understated glances replace pages of obvious dialogue.

One of the most powerful scenes involves a dinner party that Otilia is forced to attend with her overbearing boyfriend and his family. The young woman listens impatiently to the frivolous, uninformed bourgeois small talk while thinking anxiously about the plight of her friend. We think about how superficial many of the conversations we have in life truly are, while there are people suffering right around the corner. 4 Months, 3 Weeks and 2 Days is a work of profound empathy and unobtrusive technical virtuosity. It has stood up well over five years, so it’s likely to stand up well for all time. – Jacob Adams 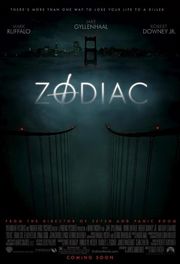 As David Fincher slowly emerges as one of the preeminent filmmakers of the digital era, using the new format not merely for its aesthetic properties but the implications of those properties on storytelling, it seems fitting that his “coming-out party” for digital concerned a decidedly analog topic. Running counter to a decade’s worth of forensic shows in which crimes are solved before bodies turn cold, Zodiac‘s serial killer remains excruciatingly out of reach as the body count rises and the years tick away. Crystallizing the unbearable pain of time, and leads, slipping away is a time-lapse shot of the Transatlantic Pyramid being built in the city terrorized by the Zodiac killer. It is a reminder of how fast time snowballs out of control for those investigating the case and, in a nod to the ancient Egyptian signification of a pyramid as a great tomb, a devastating and vast monument to the dead.

Yet the fact that Zodiac can be so wrenching speaks to a personal investment in character generally absent from Fincher’s work. The detectives, journalists and even obsessive cartoonists who alternately consume themselves and despairingly abandon the Zodiac case have a humanity that makes their flaws more deeply felt, their resignation understandable and their determination both admirable and, after a time, unsettling. Impeccably shot in plunging shadows, Zodiac generates and sustains such tension over its decades-long span that one is left wondering if the killer is still out there. And worse, if he might be near you at this very moment. – Jake Cole 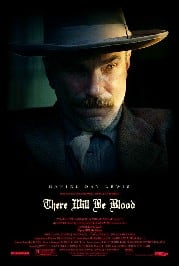 2. There Will Be Blood (dir: Paul Thomas Anderson)

There Will Be Blood, though widely lauded when it came out, was a dense, sometimes opaque film whose meaning and methods require multiple viewings before they reveal themselves. This makes it a perfect candidate for a five-year reassessment – does its supposed greatness stand the test of time? On a technical level, the answer is a resounding “yes”. Daniel Day-Lewis’ Oscar-winning performance as Daniel Plainview, an almost maniacally-driven oilman in the turn of the century California desert is just as spell-binding, intense and frightening as ever. Plainview’s relationship with his adopted son, H.W. and a revivalist local preacher, Eli Sunday anchor the film. Plainview’s treatment of both characters shows just enough humanity to draw the viewer in before backsliding into sudden and psychotic violence. Paul Thomas Anderson’s direction plays wonderfully on the tension, uncertainty and high moral stakes of the script with a massive assist from Robert Elswit’s stark cinematography. On top of that, Jonny Greenwood’s innovative soundtrack wonderfully provides emotional color to the many stretches without dialogue or exposition in the film. Based solely on craft, the There Will Be Blood is an unqualified success.

But what does it mean? Based (very loosely) on Upton Sinclair’s 1927 novel Oil!, There Will Blood has the cinematic scope, biographical focus and money vs. mankind themes that beg for comparison to Citizen Kane. However while Kane made its purpose clear, there’s no tidy moral here, no sense of what this tale of greed, God and (in)humanity is supposed to tell us. The title itself is an enigma. It’s a very simple statement whose key term is undefined. Does the blood refer to oil? Family? Redemption? Violence? Even after five years of distance and repeated viewings, I still have passionate arguments with people about what the movie is trying to say.

The lack of definitive meaning does prevent There Will Be Blood from rising to the ranks of true cinematic genius. However, the movie’s resistance to definitive analysis also gives the movie a gripping power and formidable legacy all its own. Besides, without There Will Be Blood we’d never know how chilling the words “I drink your milkshake” could be. – John M. Tryneski 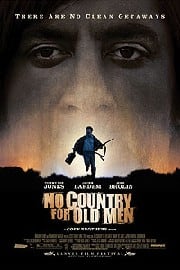 So much success followed after the release of Joel and Ethan Coen’s adaptation of the Cormac McCarthy novel No Country for Old Men – Oscar domination, follow-up Burn After Reading becoming their first film to open atop the box office chart, True Grit turning into the first bona fide smash hit of their career – that it can be easy to lose sight of the fairly significant detail that the brothers were suffering through what was probably the nadir of their shared career right before they gave Javier Bardem a distinctively ugly haircut and helped him teach the world how much menace could be instilled in the word “friend-o.” Through years of acclaim, they were still having trouble getting all that much traction with audiences, and even the critics had turned against offerings such as Intolerable Cruelty and The Ladykillers. As it turned out, all it really took was getting back to basics, crafting their leanest, tensest film since their debut with Blood Simple, all the way back in 1984.

Taking their cues from the terse prose of McCarthy, the Coens craft the tale of Llewelyn Moss (Josh Brolin), the money he finds and the men who want it back with a fierce attention to detail, particularly focusing in on the small, visual ways to covey tension: the sudden appearance of a second truck on a distant crest, the ominous shadows of feet disturbing the light spilling in from under a hotel room door. Bardem’s instantly iconic performance was rightly lauded, but the whole cast is exceptional, especially Tommy Lee Jones as the Texas sheriff whose last drops of faith in humanity are circling the drain as he bears witness to all the sordid mayhem caused by this latest affair.

The Coens had occasionally been criticized for being too indulgent in their approach to directing, showing off stylistically when a little clarity would have served better. No Country for Old Men was the final proof that, occasional visual playfulness aside, they knew how to make a sharp, disciplined film as well as anyone. – Dan Seeger