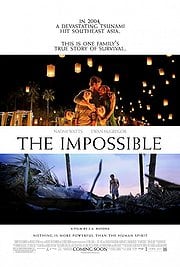 Spike Lee recently went public with his dissenting opinion on Quentin Tarantino’s Django Unchained, calling the film “disrespectful” to his ancestors and refusing to see it out of principle. This isn’t the first time Lee had words for Tarantino, complaining in the past about his use of a particular racial slur. I had Lee’s objection on my mind as I entered Juan Antonio Bayona’s newest film, The Impossible, about the 2004 tsunami that killed more than 230,000 people in Indonesia, Thailand and many other countries that have coastline on the Indian Ocean.

Ed Gonzalez of Slant Magazine wrote a scathing review of the film, declaring, “There will never be an appropriate time for a film that so dubiously depicts the toll of one of the deadliest natural disasters in human history.” He would then go on to compare the film to Paul Greengrass’ United 93, complaining of turning a horrific event into entertainment.

I do agree with Gonzalez that the purpose of Bayona’s film is “dubious.” Bayona’s first film, The Orphanage, was a mean-spirited movie that earned its acclaim because Guillermo del Toro’s name was attached to the production. However, there is something very different about telling a ghost story and recounting the true story (a point The Impossible hammers home) of a family literally swept apart by a giant wave.

But here’s the thing about Django Unchained and The Impossible: is there any milieu too holy not to film? Real people suffered and died during the sinking of the Titanic, yet no one thought twice about their misery when feting James Cameron’s film. Is it the distance of time that makes that anguish more palatable? But what’s too much? We’ve already seen numerous films about 9/11. What if someone made a movie about Sandy Hook? Is that any different because children are involved? Was Elephant “okay” because a respected director filmed it? And is it okay to make yet another film where New York City is decimated by an alien ship/earthquake/Mayan prophecy, but is setting an action film during Hurricane Sandy distasteful? It’s a difficult dispute, but when it comes to The Impossible, I do think Gonzalez has a point.

It’s not that Bayona made a movie about the tsunami that I find objectionable, it’s the fact he made a mediocre film that does a disservice to the people who lost their lives. I will say it once that it’s unfortunate we have to follow a European family rather one of the thousands of Thai natives who were affected by the tsunami, but Hollywood is too worried about the bottom line, and the populace would much rather see Naomi Watts and Ewan McGregor (a.k.a. beautiful people that look somewhat like us) in peril than Apichatpong Weerasethakul’s take on it. The only Thais in the film are there solely to help Watts’ family stay alive. To hell with their own surviving. But that’s not my main gripe.

Bayona shoots his movie as a horror movie-cum-Hollywood-actioner, a tearjerker with swelling music that tells us when to shudder in fear and when to cry. Yes, the tsunami scenes are brutally effective and terrifying. But the script is soggier than….I’ll just leave it at that. Watts and McGregor play Maria and Henry, who travel to a resort with their three young sons for some R&R. Bayona establishes Maria as the nervous sort in the opening plane sequence (which starts off the film with a cheap jump-scare), while Henry is glib and somewhat OCD. Meanwhile, their surly oldest, Lucas (Tom Holland), is just entering those grouchy teenage years. The youngest sons are too young to matter.

After the wave hits, the family is separated. Lucas must save his mother, who is mortally wounded. Henry and the little kids are nowhere to be found. And it is during the rest of the film’s run time that each character must learn to let go. Too bad Bayona continuously hurls clichéd dialogue and forced epiphanies at us. Worst of all is when Geraldine Chaplin shows up to spout some faux-deep horseshit about the light of burned-out stars.

Was it wrong to make a film about the 2004 tsunami? Certainly not. If we start limiting what can and can’t be filmed, there will be nothing left. Spike Lee also has the right to be offended by Django Unchained, but come on, man. Go see the movie before you spout off at the mouth. There is a bottom line somewhere and here it is: The Impossible isn’t poor because of its subject matter. It’s the worst kind of pandering that sinks it, a genre film dressed up in December prestige film clothes. The people killed or affected by the tsunami deserve better.