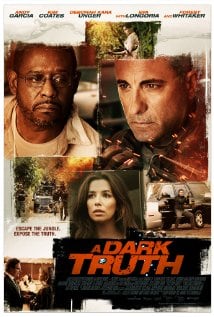 [xrr rating=1.0/5]A Dark Truth is an environmental thriller that pretends to care about the exploitation of the poor in third world countries for 106 insincere minutes. Allegedly an eco-thriller examining the problems of South American water rights sold to international companies, A Dark Truth merely appropriates the issues, exploiting the ready-made villain-victim dynamic of a real world problem out of laziness rather than genuine concern, and bears all the hallmarks of an intellectually bereft creator desperate to borrow the stories of others when he couldn’t craft his own.

Andy Garcia stars as Jack Begosian, a Toronto radio talk show host and former CIA agent who left the service after an international scandal. He now dispenses philosophy to overnight listeners, voiced by actors putting on ridiculous accents a la “Frasier,” though the humor is entirely unintentional. Family man Begosian is also the occasional hired gun for clients in need of a disgraced CIA agent to do whatever it is disgraced CIA agents do.

One such client is the over-processed Morgan Swinton (Deborah Kara Unger), part owner of the large Toronto water concern Clearbek. Morgan suspects her brother Bruce (Kim Coates) of being involved in a massacre in an Ecuadorian village that Clearbek has operations in, and she seeks the truth about the company’s involvement. Begosian makes it to Ecuador and the local resistance group, lead by Francisco Francis (Forest Whitaker) and his wife Mia (Eva Longoria). The rebels fight against companies like Clearbek who purchase control of the potable water to export to richer countries, leaving the Ecuadorians with nothing. Begosian soon reveals his prior connection to the charismatic Francis, whom he must protect while bringing him to Toronto to testify against Clearbek.

The cast is comprised of several actors far too good to be in this irredeemable dreck. Garcia, Whitaker, Coates and Longoria try their best to breathe some freshness into stale, expository, public service announcement dialogue, but A Dark Truth is all the proof you need that even good actors with noble intentions can’t salvage a shit script.

Writer-director Damian Lee clearly realizes certain highlights have to be hit within this genre, but he approximates them without any understanding or finesse. That’s how we get a lengthy shootout, something expected in an economic-political thriller, yet the multiple fatalities in the middle of a busy downtown Toronto intersection don’t garner much interest from bystanders, the police or the media. And that essential lack of understanding also explains why Lee, in an attempt to force parallels where none exist, borrows the names of Talk Radio writer-star Eric Bogosian and real-world revolutionary Francisco Franco for his film’s heroes.

The plot of A Dark Truth collapses under even the most delicate scrutiny. That A Dark Truth is a low-budget film is not surprising. What is surprising is that Lee, with his copious experience in directing B-grade action flicks, is still unable to employ even the most rudimentary techniques necessary to create a believable film. There are wild inconsistencies, timeline troubles and specious motivations throughout. In lieu of actual plot or character development, a series of increasingly unbelievable coincidences are employed to advance the story, peppered liberally with dull action sequences and tedious exposition. The dialogue is particularly hilarious, exhibiting that tell-tale circular quality familiar to low-budget movie aficionados as obvious padding.

The technical aspects of A Dark Truth are mostly incompetent. This film is an overstuffed made-for-TV movie with cinematographic techniques so outdated that it appears to have been deliberately filmed to look good cut down to Academy ratio for now-outdated televisions. Recycled footage inadvertently signals flashbacks when none are intended, cameras appear to be bolted to the floors and the reuse of extras in distinctive clothing is accidentally amusing.

All that is great for a bad movie drinking game, not so great for a environmental thriller that claims to have an important message for the masses. And don’t be fooled by the film’s claim during the end credits that this was based on a true story. A Dark Truth is the basest, most malevolent type of message movie, the kind that merely uses said message in the service of its own profit-minded motives.