January 26, 2021
Home Books Both Flesh and Not: by David Foster Wallace 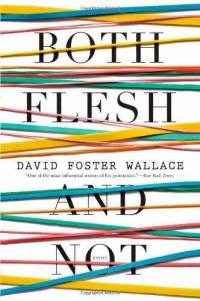 [xrr rating=3.75/5]Let’s get the slight disappointment out of the way first. Readers hoping for the third point in the triangle following A Supposedly Fun Thing I’ll Never Do Again and Consider the Lobster, David Foster Wallace’s beloved collections of humorous and polymathic essays, are advised to manage their expectations. Those two volumes are modern classics of creative nonfiction, and their combined riches form a fundamental component of Wallace’s reputation as a writer capable of digesting diverse aspects of American culture and casting them in a thrillingly new light. By contrast, Both Flesh and Not — the latest in a longish line of posthumous releases after Wallace’s 2008 suicide—is more of an odds-and-sods collection, a not-quite-essential gathering of previously uncollected nonfiction pieces from throughout Wallace’s career.

But as inessential odds-and-sods collections go, it’s pretty wonderful—especially for readers who find inherent value in bearing witness to Wallace’s transparent cogitation, regardless of subject matter. “Democracy and Commerce at the U.S. Open” is Wallace at his digressively journalistic best, using an assignment from Tennis magazine as an opportunity to riff on corporate hegemony, capitalistic excess and the public circus of a major sporting event. It’s a nice example of the kind of essay that made Wallace’s nonfiction the most immediately palatable of his forms: critical engagement—with anything and everything—in a manner somewhere between journalism and stand-up comedy. In this book as in previous collections, the strictures of nonfiction give shape and focus to the dense wilderness of Wallace’s prose. The U.S. Open piece is actually fairly quiet on the subject of tennis itself (one of the author’s top nonliterary obsessions), but Wallace attempts to analyze the sport’s physicality in “Federer Both Flesh and Not,” a piece that hovers on the verge of making tennis interesting to someone (i.e. this reviewer) with no interest in tennis.

If this collection has a unifying (meta-)theme, it’s probably that question: to what extent is it enlightening or fun to read an enlightening, fun writer discuss subjects of extremely limited (and therefore possibly unenlightening and probably unfun) interest? Wallace explicitly addresses this issue in “Rhetoric and the Math Melodrama,” ostensibly a review of two math-themed novels; his hand-wringing about the appositeness of the audience for both the novels in question and his own review takes on an extra layer of metatext as the essay is transposed from its Science magazine origins into this general-interest collection. Elsewhere, an extended critical diegesis of David Markson’s experimental novel Wittgenstein’s Mistress is essentially worthless unless you happen to have read that book; and even the lexically inclined may find their patience tried by “Twenty-Four Word Notes,” an annotated vocabulary list that was originally printed in a thesaurus and probably should have stayed there. This stuff is undoubtedly of tremendous value to DFW diehards hungry for any remaining glimpses into the man’s prized brain, but might be frustrating for more casual readers.

But not everything has such narrow appeal. Among the most fun reads here is one of Wallace’s regrettably rare forays into film criticism: a disgruntled critique of Terminator 2. He argues, in a rhetorical mode that’s both seriously disappointed and offhandedly funny, that the massively inflated budget required for Terminator 2’s state-of-the-art digital effects required James Cameron to forsake the sly intelligence of the original Terminator in favor of formulaic, crowd-pleasing garbage. Wallace’s concerns over the degradation of commercial cinema in the age of F/X-driven spectacle blockbusters are obviously even more relevant now. Here’s a broader conclusion he draws: “There is no quicker or more efficient way to kill what is interesting and original about an interesting, original young director than to give that director a huge budget and lavish F/X resources.” I found myself immediately thinking of Christopher Nolan’s post-Memento decline, and nodding in sad agreement. It’s also hard not to wonder what Wallace would have made of Cameron’s Avatar, which extended the mo-money-mo-problems situation of T2 but was also suffused with a romantic sincerity (rare in the cynical world of big-budget action movies) that the author might have appreciated. The sad refrain apropos of any post-2008 DFW surmising: alas, we’ll never know.

The most recent substantive piece is perhaps the most trenchant in the collection, and definitely the most relevant to our present moment. “Deciderization 2007—A Special Report” is ostensibly the introduction to a Wallace-curated volume of the Best American Essays series, but Wallace uses his appointment as a metaphor for the daunting task of processing information in post-millennial America. Fretting over “the tsunami of available fact, context, and perspective that constitutes Total Noise,” Wallace lays out his vision of a culture wherein the job of sorting and analyzing the overload of data is “subcontracted”—not to the shrill news media or to partisan ideology, but to informed, artistically inclined writers like those whose essays Wallace selected. And implicitly to Wallace himself, whose best nonfiction work—always showcasing a brilliant mind attempting to make sense of itself and the world—quiets the noise beautifully.

A Million Heavens: by John Brandon