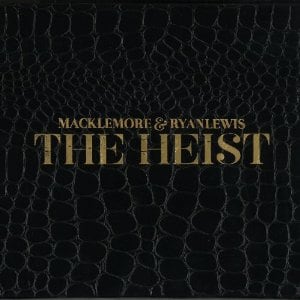 [xrr rating=3.75/5]Almost four short years ago, Seattle rapper Macklemore was just an out of town opener for a pair of local bands in Colorado. Even though he was a solo act using prerecorded beats, he was riveting. He blended humor, tackled serious philosophical dilemmas and showcased his radical honesty. This mix flowed from his 2009 album, The Language of My World, which defined his voice. Willing to address tough questions like cultural appropriation on “White Privilege,” Macklemore didn’t settle for platitudes or oversimplification. Although his sound was stripped down, his backing tracks sampled some occasionally surprising artists like Chris De Burgh

Moving forward from those early days, he’s partnered with producer Ryan Lewis and built a huge grassroots following. His latest album, The Heist, highlights the tight connection with Lewis and serves as their introduction to a larger audience. Macklemore’s raps still hit a sweet spot with shifting rhythmic flow, clever rhymes and heartfelt sincerity, but Lewis brings a pop aesthetic that fine tunes the songs, hitting the perfect accompaniment to emphasize the core messages. As the pair step into national distribution, they bring along a host of fellow Seattle artists as guest collaborators to further round out their sound.

The album starts strong with the title track, which shows what the band is all about: deeply personal lyrics, clever lines to lighten the mood, a solid positive message, a smooth flow that incorporates occasional off-beat rhythmic punches and a tasteful musical backing. Macklemore’s soft-sell ego rap carries a message of perseverance. He lays out his successes, but attributes it to the hard work that got him there. With a confessional tone, he links his own struggles to a universal theme and elevates his rap aspirations to a noble artistic pursuit. Meanwhile, Lewis’ electro-pop groove contributes to the elevation. The chorus, “10,000 hours felt like 10,000 hands/ 10,000 hands, they carry me,” distills the song’s message to its purest essence. Later, when the lyrics turn darker and introspective during a breakdown section, the music shifts to a starker beat and piano line.

Continuing the positive tip, The Heist serves up a social action track, “Same Love.” Tied to support of Washington State’s Referendum 74 to allow same-sex marriage, Macklemore tackles the issue head on with a focus on his own personal connection. Mentioning his gay uncle and his own stereotypical assumptions as a kid, he keeps it low key, stating the obvious without getting preachy. It’s refreshing that nobody gets a free pass; Macklemore even takes rap music to task: “If I was gay, I would think that hip-hop hates me.” Still, he offers understanding and a path forward. Lewis shows a subtle hand on his arrangement. The music references Curtis Mayfield’s “People Get Ready,” building a gospel feel on the chorus that suits Mary Lambert’s soulful voice

Usually, the rapper gets all of the attention while the producer can be taken for granted. Lewis’ skillful accentuation means he’s hardly flamboyant, but he does get one track to cut loose and take center stage. “BomBom” progresses through a suite of sections, starting with a minimalist piano jam that merges with a punchy dance beat. Blending samples, beats and original music from The Teaching, the mood wanders between jazzy inward reflection and assertive carnival rhythm. Live drums from the band trade off with looped beats. The track mutates with an improvisational feel.

Aside from that one instrumental, The Heist runs through Macklemore’s favorite topics, from his own sobriety to choosing self-dignity over commercialism. At his strongest, like the heavy personal admissions in “Starting Over,” he is raw and revealing without histrionics. Even “Jimmy Iovine,” a relatively weak track which plays out as a cartoon revenge fantasy against the music industry, offers some humor and smart lines. Throughout it all, Macklemore seems approachable in a way that rappers like Kanye and R. Kelly never could be, largely because his stage persona is less of a mask.