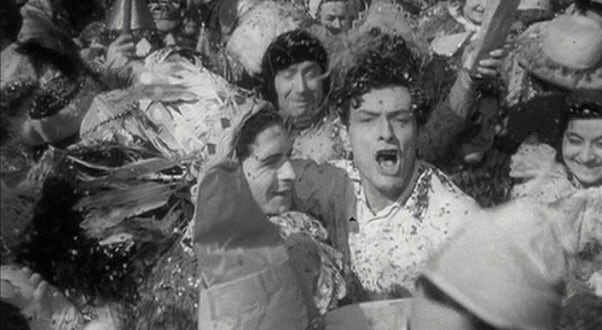 During the explosion of the French New Wave, François Truffaut and the other directors involved with the movement railed against the cinéma de qualité, or what they saw as the lazy establishment of French filmmaking. Among their targets was Marcel Carné, a director hopelessly out of date by the late ‘50s. Treading on the reputation of his pre-World War II films, most of Carnés work during the rise of the New Wave was savaged by critics. Truffaut and the other critics at Cahiers du cinéma took it a step further, claiming that Carné’s early successes had nothing to do with his own directorial skill, but were due to his collaboration with the poet Jacques Prevért.

Truffaut did stand behind one Carné production, a movie he first saw at 13 years old and then continued to watch over and over again: Children of Paradise or Les Enfants du Paradis (1945). In 2008, Cahiers du cinéma published a list of its Greatest 100 Films of all time. Ranked ninth overall, Children of Paradise sat six spots ahead of any New Wave film (Godard’s Contempt at #16) and ranked third overall for French titles on the list, behind Renoir’s The Rules of the Game and Vigo’s L’Atalante. Twelve years after his death at the age of 90, Carné had the last laugh.

Popular among cinephiles, Children of Paradise, however, does not enjoy the ubiquity of other movies in the Top 10 on that list, such as Citizen Kane, Vertigo and Singin’ in the Rain. It is often compared to Gone with the Wind in its sweep, but does not have the same casual audience in the United States that makes the names Rhett Butler and Scarlett O’Hara an indelible part of our culture. But those Gone with the Wind comparisons are balderdash. Children of Paradise is a much more complex, romantic and intelligent film than Victor Fleming’s 1939 bloated epic.

Initially divided into two parts (“The Boulevard of Crime” and “The Man in White”), Children of Paradise has been shown as one 190-minute film more or less since its debut in 1945. However, this split was not Carné’s decision. Filmed during the waning days of World War II, the Vichy administration stated that no film could be longer than 90 minutes. It is a miracle Children of Paradise was even filmed at all. Many of the extras were members of the French Resistance and used the film as a cover. Key members of the production, including set designer Alexandre Trauner and musical director Joseph Kosma, were Jews who worked clandestinely with Carné and Prévert. One actor had to flee in the midst of filming after the Resistance sentenced him to death for aiding the Nazis. Filming had to be suspended numerous times, including when the Americans stormed Normandy. 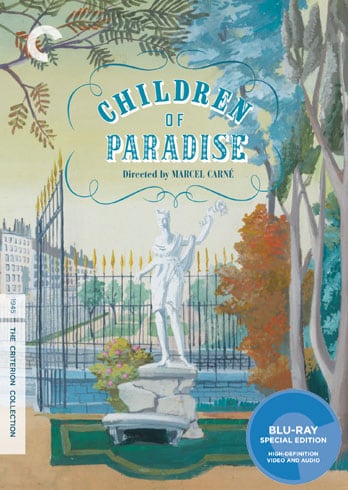 The backstory alone may sound like a plot to an exciting movie, but Children of Paradise plays out like a novel from the age of Victor Hugo rather than a paean to French resilience. Carné is instead feting passion in his film, using theater as his muse. Set in the 1820s and 1830s, Children of Paradise tells the story of four men (all based on real personages) who fall under the spell of courtesan Garance (Arletty). But rather than tell a simple love story, Carné and Prévert are mourning the passage of an age, a time where cinema trumps theater, where talking motion pictures replace silent films, where the cynicism and destruction of a Nazi-occupied Europe sets fire to the romantic notions of Baudelaire and Delacroix.

When we first see Garance, she is part of a sideshow attraction on the spirited Boulevard of Thieves, standing in as the carnal representation of Truth and Beauty. Submerged in a spinning tub in the nude, admiring herself in the mirror while patrons gawk, this early appearance defines Garance’s role for the rest of the film: she is the placid center of the universe around which the film’s male leads revolve.

We meet Frédérick Lemaître (Pierre Brasseur), a young actor who aspires to be a star. He attempts to pick up Garance on the street, but she ignores his advances. Carné follows Garance to a scrivener’s shop run by Pierre-François Lacenaire (Marcel Herrand). While Frédérick is a foppish innocent, Lacenaire is a dark criminal, given to cruel logic rather than passionate love. He plays the part of the dandy and has the heart of a poet, but Lacenaire possess a strong contempt for the rich. While it seems Garance and Lacenaire are romantically attached, the subtext exists that he is not interested because he is a homosexual (Carné himself was openly gay).

Garance is out on the street again when she encounters the mime Baptiste Deburau (Jean-Louis Barrault, giving one of the all-time great screen performances). After saving her from the police, Baptiste falls madly in love with Garance, an unrequited desire that will haunt him for the rest of the film, even as his theatrical star power ascends. Lastly we meet the rich Count Edouard De Montray (Louis Salou), who gives Garance protection and luxury in exchange for her love. While each of these men is flawed, the Count is the most imperfect, taking to arms over the slightest insult.

Like the richest characters in the deepest novel, the characters in Children of Paradise evolve over the film’s runtime. The melancholy Frédérick becomes the film’s comedic center as he becomes a titan of the stage while Baptiste descends into a black morass as his unrequited love for Garance eats away at his heart. The ascension of the boorish (yet likable) Frédérick and the emotional devastation of Baptiste could stand in for the end of the silent film, replaced by the talkie, the pantomime replaced by speaking parts on the stage. But Children of Paradise is about more than that.

Carné and Prévert use the theater as a metaphor for the mundane conflicts and choices that we all face. Large sections of the film take place on stage, the characters acting out the tragedies and adventures that are occurring off the stage in dressing rooms, flophouses and out on the street. At the premiere of Frédérick’s version of Othello, Lacenaire pulls back a curtain to reveal a balcony where Baptiste and Garance share a kiss, showing the smarmy Count that he is being cuckolded. The theater of Children of Paradise and the theater of our lives do not only take place on the stage, but also within ourselves.

Garance represents that kernel of Truth and Beauty we all thirst for, that elusive muse for which we grasp, but cannot posses. Carné’s film is the same thing in many ways. “I would give up all my films to have directed Children of Paradise,” Truffaut once claimed. Carné and Prévert know better than to give us an ending wrapped with a bow. We don’t get a snappy one-liner from Clark Gable here, but instead we are like Baptiste, watching the film come to an end and hoping for more. Only the very best films fill us with such longing. Children of Paradise is easily one of them.