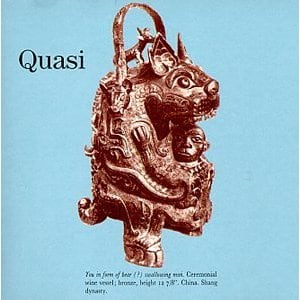 Librarian rock: that’s how I think of Quasi, that’s my own Dewey Decimal classification for this cheerfully dystopian duo of indie rock royalty Sam Coomes and Janet Weiss. Librarians delight in witty words, and frontman Coomes is a forlorn humorist of the Gen X set (“Life is dull, life is gray/ At best it’s just OK/ But I’m happy to report/ Life is also short”). His voice is even bookish, sounding like a reedy professor with scraggly hair and a still-relevant Marxist tattoo (in fact, this is a somewhat fair description), a guy who’s read a ton of all the right books and yet is still emotionally persuaded to just check out. Weary of choosing again and again to be existential. For Quasi, this ennui is –counter intuitively – a creative force. Their third full-length from 1998, Featuring “Birds”, is predicated on the all-absorbing dysthymia of modern life but lies far afield from mope music. Feeling underwhelmed, Quasi rocks out.

Many of the songs on Featuring “Birds” begin and end completely differently, rarely adhering to a verse-chorus-verse structure. More often Quasi pieces together mini-movements that morph from loosely organized chaos to a stabilizing transitional section hewn in by Weiss’s finely paced drumming to a melodic burst in which the lyrics present as much-anticipated denouement. Introductions can last minutes. “Our Happiness Is Guaranteed,” all these years later still a set list favorite at live shows, is built this way, the opening bars a tripping, offbeat syncopation that sets up for Coomes flat-palming dissonant chords on his much-abused keyboard, finally resolving into a traditional song pattern and less-than-traditional lyrical content written from the perspective of future humans who live in “orbiting pods, underwater domes.” “Nothing From Nothing” is also astronautical, anchoring tones drone as keyboard effects ricochet and squeal, Weiss’s chimes suggesting an earthly breeze in this outer space before guitar and drum kit establish a one chord eighth note rhythm that repeats for a full 40 measures uninterrupted. “You can’t throw it all away/ When there’s nothing there anyway,” Coomes quips as the tempo is slowed by half, “Nothing from nothing/ Is nothing, nothing, nothing.” This is a song for those who know that Big Bangs can be colossal disappointments.

Unique to Featuring “Birds” – and a quality that ups its dork appeal – is the recurring employment of a bygone nickelodeon aesthetic. “Please Do” is a small, earnest song, Coomes sustaining old-timey harmonies accompanied by ukulele, and, perhaps, a straw boater hat. A swaying oom pah pah is the unlikely insturmental motif to “You Fucked Yourself.” More dramatic are the vaudevillian codas, the finales when Coomes exaggerates in a very old/new way a “fuck this” subtext by blowing it up into showtune proportions. “I Never Want to See You Again” concludes this way, the last repetition of this phrase a grand ritard dedicated to a grand ret–… errr, dum-dum, Coomes waggling his hands theatrically as a big hook yanks him off stage right. It’s the maniacal fun of making your hate a cartoon, like when you want someone to shut up so much that you dissolve into a giggling fit about it. “I Give Up” starts off boppily enough, the keyboard melody line sounding like future-forward Charlie Brown traveling music, but closes out with Coomes and Weiss in barbershop duet as they drag out, “It’s gone so wrong/ So long/ It’s gone so wrong/ So long, so long….” “I Give Up,” weirdly, is a proper song for a final bow.

Though Featuring “Birds” is largely preoccupied with the restlessness of “drifting on the murky Sargasso of the everyday,” Quasi spikes their disaffection with enough compulsive joie de vivre to prevent a full blown depressive episode. Seas are for sailing as keyboards are for pounding, or so Quasi believes. If we must drift, let us not do so silently.