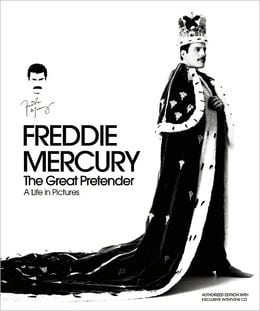 [xrr rating=2.5/5]In his short life and expansive career, quintessential rock frontman Freddie Mercury adopted a persona as deliberately visual as it was musical. Elaborate costumes, often both cryptic and risqué, further embellished the band’s many-layered vocal tracks, boisterous guitar lines and vaudevillian melodies. Critics derided Queen, and especially Mercury, for the things that eventually canonized them—ambition, spectacle independent of substance, embrace of cultural influences outside of rock music. In Freddie Mercury: The Great Pretender: A Life in Pictures, Mercury’s public and private lives blend in a comprehensive photo album and memorial. Compiler Richard Gray accompanies the reader, his captions, asides and quotations creating a sense that he’s peering over your shoulder and brimming with the stories behind each shot.

In a brief introduction, Gray outlines not just the career path of Queen, then the anti-punk band with a little-appreciated rebellious streak, but his own overdue appreciation of Freddie Mercury’s over-the-top antics. An accompanying CD contains an interview with radio host Mary Turner. But the real value is in the photos, which start with diapered baby Faroukh Bulsara grinning in an award-winning shot and end with some of the artwork and handwritten notes that remain in his mother’s possession. Over 40-odd years of photos, Mercury grows from a toothy boarding-school youth, through familiar winged-glam and butch-leather phases, to a natty opera enthusiast in a waistcoat.

The delight is often in the details: early concert photos show Mercury in skintight jumpsuits while Brian May wears Nikes; costumes and accessories reappear through the mid-1970s before success purged Mercury’s closets after every tour. He and his entourage don flowered hats at his 40th birthday party in sharp contrast with the topless servers and drag costumes that marked his 39th. Mercury brings the world to its feet at 1985’s Live Aid. But no matter the phase, whether at a photo shoot or relaxing, Mercury looked the part at every moment. This wholly realized celebrity persona lent its name to the book, after the Platters’ hit that he covered. The man was indeed great and almost always pretending, but at the time, he appeared to be a certainty: death, taxes and Freddie Mercury in an outlandish costume.

As an authorized release so long after the fact, some of the details are perhaps sanitized, the controversies lessened in magnitude given our more modern relationships with nudity, homosexuality and camp, as well as by the respectful lens cast on those gone too soon. Though no less enjoyable, a bit of grit and hullabaloo would have been a welcome addition to the video stills and obscure promotional shots.

The accompanying CD contains an hour-long interview between Mercury and radio host Mary Turner. At home in Munich in 1984, Mercury talks candidly about his relationship with the band (“I haven’t seen them…”), new technology (“digital recording is… all about getting the cleanest sound possible”) and his own ambitions (solo work, film scores, musicals). Such interviews were rare and Mercury rarely so forthcoming. His voice is higher than would be expected, with a faint lilt remaining from his childhood in Zanzibar and India. Though the conversation is easily found online now, it nonetheless provides a revealing portrait of Queen 13 albums into their career. Mercury doesn’t romanticize the industry; he talks frankly about marketability and praises Roger Taylor’s business savvy. He opines on the merits of life in Germany, America and Japan. He is humanized.

On the heels of this year’s “intimate biography” Mercury by Lesley-Ann Jones, and with rumors still surrounding the forthcoming biopic, the photo-biography seems an appropriate expansion on the Mercury mythos. Twenty years after his death, and a good 40 since his breakthrough, Freddie Mercury remains larger than life. His shadow looms over sporting events, advertisements, film and modern music. This collection gives some indication as to why.