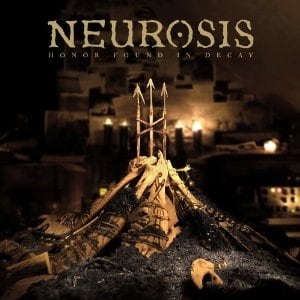 [xrr rating=3.5/5]“Post-metal” is one of those cleverly elusive terms critics like to throw around to describe bands like Neurosis—but what does it mean? As evidenced by Neurosis’s long career and ten studio albums, it would appear to refer to the gradual evolution of their sound, from the metal-infused punk found on their 1987 debut, Pain of Mind, through the hardcore/prog-rock fusion of 1993’s Enemy of the Sun to the expansive doom-laden sprawl of their recent releases. Never exactly a metal band in the classic mold, Neurosis has always charted their own direction, borrowing from disparate styles and genres to create a unique kind of music which retains the heaviness and aggression of metal while incorporating elements of gothic folk, ethereal ambience and plain old hard rock into a progressive, art-damaged framework. “Post-metal” is an apt description for what Neurosis is up to.

Their latest, Honor Found In Decay, does not so much continue this evolution as refine it and, in the process, yields their most wholly satisfying album in years. The opening track, “We All Rage In Gold” is prototypical Neurosis in their current guise. A halo of electronic bells and drones sets the appropriately grim atmosphere before pummeling drums and crunchy guitars enter with a stomping, mid-tempo groove. Alternating between soft and loud sections, the song is barely six-and-a-half minutes long yet still feels brutally epic. There are several longer tracks on the record, hovering around ten minutes apiece, but even there the arrangements are tightly controlled, never wasting a second. Each song follows a similar recipe: startling dynamic swings and restlessly shifting tempos imbued with gossamer synth washes and other unearthly sounds. Scott Kelly’s vocals are mostly death-metal growls and screams leavened somewhat with quieter, spoken or whispered sections. Even so, on tracks like “My Heart for Deliverance” and “All Is Found…in Time,” Neurosis evokes a depraved grandeur few bands can even approximate. Only “Bleeding the Pigs” fails to transcend formula, despite Noah Landis’s scarily trippy synthesizer work.

Believe it or not, what really makes Honor Found In Decay interesting are those keyboards. Now, everybody knows synthesizers do not rock—but, thankfully, Landis doesn’t even try. Instead, he deploys an array of sounds to supplement the overall despairing mood, adding texture and expanding the otherwise limited sonic palette in surprisingly affecting ways: a reedy bagpipe chanter provides a funereal tone to “At The Well,” weeping accordion accompanies chiming guitars on “Casting of the Ages” and a desolate violin draws the album to a somber close on “Raise the Dawn.” These samples not only sound “real,” they are played in a convincingly idiomatic fashion; you would never suspect them to be synthesized. Elsewhere, the effect is almost subliminal, subtle waves of sound floating amidst the drums, bass and guitars—and sometimes Landis is front and center, as on “All Is Found…in Time,” with its spacey breakdown and majestic instrumental section.

That Neurosis has worked with the legendary engineer (and Big Black/Rapeman/Shellac frontman) Steve Albini on their most recent string of albums is further evidence their music is something beyond mere metal. Known for capturing a dry, naturalistic drum sound, Albini’s recordings are the antithesis of the reverb-drenched, hyperreal metal albums of yore. Moreover, the distortion is dialed back on the guitars, revealing more nuanced tones while still being plenty heavy. And rather than compressing the hell out of everything, the band’s dynamics have been faithfully preserved: quiet parts are genuinely quiet while the loud sections are bone-crushingly loud. All this flies in the face of conventional metal productions, which tend towards a monolithic wall of sound approach. Content aside, this record sounds more like the meticulously crafted indie rock albums Albini is famous for than the glassy, slick productions found elsewhere in the metalverse. “Post-metal” may be lazy critical shorthand but it fits a band like Neurosis; one listen to Honor Found in Decay and you’ll know why.