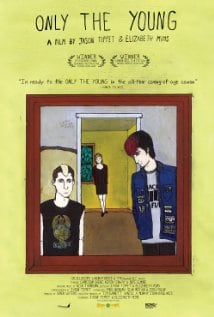 [xrr rating=3.5/5]We don’t spend very much time at all with the parents or guardians of documentary Only the Young’s three teenage protagonists, and this gives the film’s adults a ghostly presence. At one point, an image of female protagonist Skye’s mother is blurred to protect her identity, but it feels as though this irresponsible and wayward parent (a recovering drug addict, long estranged from her daughter) has been purposefully banished from the world of the film, lest she muss up its sometimes-idyllic nature. The most prominent adult is a mentor who seems more like an overgrown kid than anything else, guiding protagonists Kevin and Garrison through a shared love of skateboarding and Jesus Christ, Only the Young’s twin passions. Directors Elizabeth Mims and Jason Tippet shape their presentation of this world, turning it into an Edenic land of innocence. We’ve seen teenagers like these before, and we’re often encouraged to look down on them, thinking we know full well the mistakes they will make as we observe them from our more mature vantage point. But Only the Young rejects this attitude altogether, honoring these three teens and nurturing the youthfulness that will surely, sadly dissipate with age.

The almost total vacuum of adulthood forces us to consider Skye, Kevin and Garrison in the film’s ever-evolving here-and-now rather than in the context of what they will become. Importantly, there is no tedious coda in which we learn of what happens to these people after filming was completed, as this would only, in the context of a film like Only the Young, suggest that their youth is just a brief chapter in their lives eventually to be overridden by their mature selves. At one point, Skye tells us that even though she and Garrison had dated, he never kissed her. This cues us perhaps to see them as immature, but then she admits that she liked this about him because he found many other ways to show her love. Suddenly, they’re not the awkward teens we want to dismiss them as but maybe a couple of people who love and give more openly than the rest of us do at times.

The relationship between Garrison and Skye is often tentative and never fully formed, yet we can’t help but admire their innocence, even in the face of real-world hardships. Skye’s father is just getting out of serving time in prison, and she has severed contact with her mother altogether. She and her grandparents, who raised her and serve as her guardians, are also getting kicked out of their home. Nonetheless, she is easily the wisest, most well-adapted of the group, and the positive attitude she maintains about life hardly seems shallow. Garrison’s best friend Kevin is even more troubled. In one scene, the three are sitting together and the conversation turns to Kevin’s habit of cutting himself. This moment captures the inverse of Garrison’s open and sweet loving-kindness, not only in Kevin’s troubled but outwardly normal state but also in their communal inability to deal openly and honestly with the heaviness of life. We see this again when Garrison makes light of Skye’s anxieties over having to move: as gentle and giving as these young teenagers are, they lack the courage to speak their minds that comes with maturity, after mistakes are made and after they have been tested.

But this innocence is precisely what makes the world of Only the Young so compelling. Where a great many documentaries might focus on predicting what will become of these youths, Mims and Tippet respect ambiguity. Kevin, for instance, could persevere, work harder and find great success as a skater, after stumbling during an initial foray into competitive skateboarding at an event in Arizona. But he might also give in to whatever inner demons seem to be plaguing him. Garrison seems torn between his commitment to his Christian faith, represented by the thoroughly devout Skye, and the temptation to think more freely, which comes to the fore after his church urges him to stop seeing his girlfriend Kristen, whose hip-hop dancing and critical approach to Christianity, daring to question the church’s conservative gender attitudes in one scene, mark her as a kind of rebel far different from Garrison, the straight-edge punk skater. Where some directors might perceive their own success in terms of predicting how their subjects will grow into adults, Mims and Tippet treasure the moments they capture in all their presentness and never extrapolate too far into an unknown future.

This also helps remove the distance that might crop up between the audience and Only the Young’s subjects, with whom we probably share little in common. The protagonist’s Christianity is handled adeptly, never standing out as conspicuous, never mocked and never portrayed as immature overzealousness. Kevin and Garrison’s mentor briefly gives a speech in which he welcomes the image of skaters as rebels, comparing this to the reputation of Jesus and his disciples. In the end, these are just three young people trying to fit in and find an identity. The “punk” image they cultivate can easily be mocked, sure, but there’s never a point where we doubt the sincerity and thoughtfulness with which they experiment with their identities. One of the film’s great thrills, in fact, is watching the ever-changing hairstyles of Kevin, Garrison and Skye, which seem to shift almost from scene to scene. And in the way the film begins, showing us Kevin and Garrison’s plan to transform an abandoned house into a skater’s paradise, we also come to admire the hardworking drive of these kids. Only the Young’s title reaffirms what its tactic of eliding the adult presence suggests: what might it look like if we could glimpse a world created by and in the image of a group of Christ-loving punk skaters? It’s more interesting than you might think.