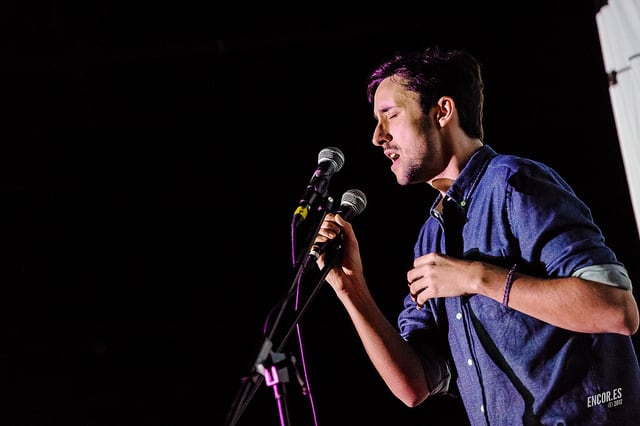 December 14, 2012 was undoubtedly a sad, scary day. The tragedy at Sandy Hook Elementary School in Newtown, Connecticut hung in the air, an ominous reminder of how fragile life really is and how dangerous our world can be. It’s a chilling coincidence that R&B and electronica artist Tom Krell, otherwise known as How to Dress Well, gave a highly passionate performance that evening drawing on tunes from his latest LP Total Loss, a record that evokes the authentic emotional complexities of grief. The concert felt like a sort of elegy, not just for the victims of violence on December 14, but for those who have ever passed on, leaving their loved ones behind.

Don’t get me wrong, though. The show wasn’t a maudlin affair. It was as much an exuberant celebration of life as an acknowledgment of the stark reality of death. The performance venue itself was inspiring in its unconventionality. The concert, the final one on the artist’s current touring calendar, was held at Co-Prosperity Sphere, an experimental cultural center and artistic space in Chicago’s Bridgeport neighborhood. Sponsored by the Public Media Institute, the center houses everything from art exhibits to open mic nights to fundraisers for local arts organizations. The venue includes a large open space, remarkable for both its austerity and versatility. The musicians and concertgoers mingled freely in this area before the show, creating a sense of commonality between audience and performer. It was an enjoyable change of routine to attend a concert on the South Side of Chicago, outside the usual “hipster conclaves” of the North and near West Sides, in which indie shows typically occur. This pleasure was heightened by the fact that Co-Prosperity Sphere has the feeling of a true artistic community, not just a loose amalgamation of people who happen to be watching some band at a bar. The event felt purposeful and organic.

The first opener, a Chicago electronica act called GRADES, established a playful, poppy tone. Singer-songwriter Kortland Chase was joined by a live drummer as he belted out his passionate, Justin Timberlake-esque vocals against groovy tape loops. Chase’s performance was successful mostly because he didn’t take himself too seriously. He wore a bunny mask for part of the set and interacted freely with the audience, walking around the crowd while singing, running to the makeshift bar at the side of the room to grab a quick PBR during an instrumental break and standing on top of the merchandise table during a particularly emotive moment. Beacon, the New York-based electronica duo, was the next opener. Their music was a bit darker, and quite a bit louder, than GRADES. Beacon’s beats featured some complex polyrhythms, which, coupled with some falsetto lead vocals, channeled Thom Yorke’s The Eraser at times. Colorful images, such as blooming flowers, stars and galaxies and silhouetted dancers, were projected behind the artists as they sang such passionately naked lyrics as, “I’m missing you … wishing you’d come back to my place.”

GRADES livened the crowd up, and Beacon put the audience in a serious, reflective mood. Together, they created the perfect emotional crucible for How to Dress Well. It’s admittedly easy to be skeptical about live electronica shows. I’ve been to my fair share of concerts in which a powerful “headphones record” doesn’t effectively transfer to the stage. Fortunately, How to Dress Well gave us a unique, impacting experience. Like the LP Total Loss, Krell’s set was relatively short but packed a lot of feeling into a small space. Before performing one of his new tunes, he said, “Don’t get stressed out, but this song is really loud …” Indeed, the subs rattled the windows of the small venue throughout a good portion of the set. The extreme low and high frequencies of the music could be felt in a way that they could not on record. An arresting display of both concrete and abstract video images accompanied Krell’s performance, merging the visual and audio arts in a manner apropos to a venue such as the Co-Prosperity Sphere.

Despite the fact that technology, both musical and cinematic, was so instrumental in creating the show’s elegiac effect, Krell never lost the human element in his performance. His high-pitched voice was stretched just short of the breaking point throughout the set, giving off a feeling of simultaneous confidence and vulnerability. Krell’s face and whole body matched the vocal intensity brought to such lyrics as, “I think about you daily” and “What would it be like to have a life that wasn’t like this?” The crowd, clearly familiar with Krell’s most recent record, cheered in approval when he announced song titles like “Running Back” and “Cold Nites.” The highlight of the night came when the artist played the tune “Set It Right,” one in which he lists many of his friends and family members who have died, singing, “I miss you” after each name. I couldn’t help but think about my own loved ones who have passed on. Poignant music in an inspirational performance space provided much needed catharsis that night.