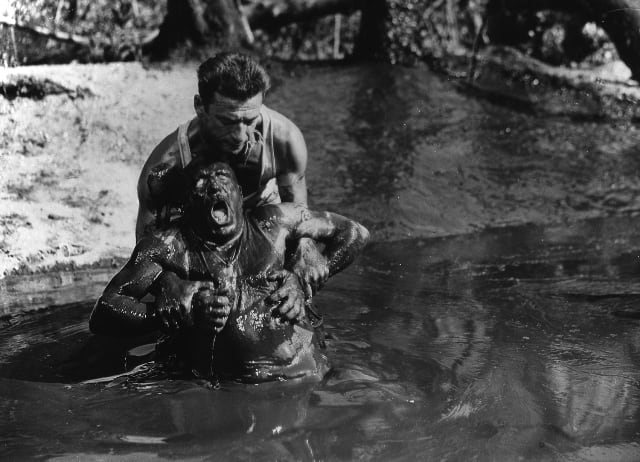 One of the quintessential American directors of the ‘70s, William Friedkin is a man who made his name by imitating great directors and is now himself greatly imitated. In his heyday, like most of the American film brats of his generation, Friedkin was a dedicated acolyte of the best European movies produced in all of the years before he began directing. So after conquering Hollywood with his two early hits, The French Connection and The Exorcist, it isn’t surprising to see that his next move was a direct remake of one of the great works of ‘50s European cinema, Henri-Georges Clouzot’s superhumanly tense, strangely mythic The Wages of Fear. Friedkin’s remake, somewhat misleadingly titled Sorcerer, is the work of a deft showman, a talented craftsman and an aggressive idealizer of the tough-guy world he liked to see in movies. It doesn’t hold a candle to The Wages of Fear, which is inarguably a masterpiece. But the energy Friedkin brings to the story that both movies share, a very simple one about four roughnecks hired by a corrupt oil company to cart high-explosives on broken-down trucks across rugged South American terrain, is nevertheless something to behold. 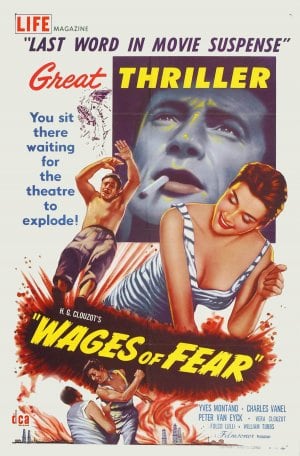 Oddly, Friedkin’s vision for his version of The Wages of Fear seems to be a direct homage to another masterpiece, one almost as great, Werner Herzog’s Aguirre, The Wrath of God (1972), a relentlessly eerie film about a Spanish conquistador mission into both the jungles of South America and the depths of insanity. Sorcerer and Aguirre each stand out for their ability to create a truly threatening atmosphere out of a lush jungle location, and for asking the dubiously pertinent question of what greed and crazy determination might bring to men (in Sorcerer’s case, four expatriate criminals, including an intense Roy Scheider, who desperately needed a paycheck) who pit themselves against the Amazon. But though Friedkin is of the same filmmaking generation as Herzog (and arguably as adept a stylist) what he’s missing is the very thing that links Herzog to Clouzot: a sense of the mythic nature of the story he’s told. The Wages of Fear superficially resembles Aguirre far less than Sorcerer, but at heart Herzog, telling a totally different story, came closer to the greatness of The Wages of Fear than Friedkin could remaking it.

But this isn’t a review of Herzog. It’s only helpful to note the ways that Friedkin stole from him to update Clouzot. Friedkin’s frenzied style of direction is nowhere near as focused as that of Herzog, who, like Clouzot, had the talent for concentrating on character – specifically the slow drift of characters towards insanity – in the midst of action. Friedkin is almost solely an action director: his focus is on men’s faces, on sweat and dirt and blood and wounds. But through it all we learn little about his characters. Sorcerer is a movie about tough guys that exists on a level of pure action, pure surface. As that film, it’s impressive: all of its characters are so overwhelmingly creased and sweaty and visibly exhausted from the extreme output of energy it takes to get the job done that they wind up seeming like nothing more than the sum of their scrapes and bruises. Friedkin is like a boy penning hard-boiled fiction, his characters existing on no other level than the one on which men struggle and sweat and bleed and curse. There is no import to the journey of the men in Sorcerer, though it is exactly the same one in The Wages of Fear, a 200 mile trek through dangerous jungle passes on trucks loaded with the explosives needed to put out a gargantuan oil fire. The men in The Wages of Fear aren’t given the extensive back stories of the men in Sorcerer, yet Clouzot’s movie is about the slow burn of tension and stress in an impossible world, which goes a lot farther than a little exposition in making a character feel real. 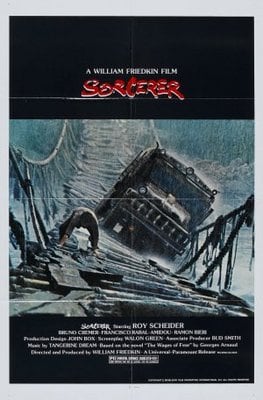 Still, Friedkin is a whiz with his camera and a near-genius at creating atmosphere, perhaps as talented with pure energy as Clouzot was with tension. The centerpiece of the journey-by-truck in Sorcerer, an impressively staged crossing-of-a-rickety-old-bridge-over-a-rushing-river that reportedly took many months and millions of dollars to film, is unforgettable. The respective scene in The Wages of Fear, however, in which the trucks have to make one hairpin turn using a rotted-wood outcropping as their only support, is by far the more effective, so meticulous you can remember each plank of wood.

If it’s a side-by-side tally, The Wages of Fear on one side, Sorcerer on the other, then Clouzot wins easily, but not necessarily with more tallies. It’s just that the ones he does score are worth much more. Friedkin scores marks for indelible imagery and relentless action, for, if not the kind of tension he seems to have hoped for, then at least for the kind that comes a movie can and will pummel you relentlessly. The Wages of Fear, however, is timeless in a way that justifies that over-used word; it is truly mythic, and achieves its effectiveness by simply showing in great detail the struggle that it takes to accomplish a difficult thing in life. Sorcerer flies by, in contrast; it’s timeless only as something that should be dredged up for midnight movie screenings, a one-of-a-kind feat of action filmmaking by a talented copier. Comparing The Wages of Fear to its American remake is something like reading a textbook outline of the ever-present master-imitator paradigm that runs through 20th century film. Clouzot will be studied and remade forever; guys like Friedkin will be the ones to do it.