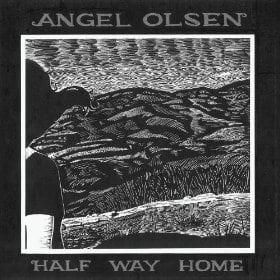 [xrr rating=3.5/5]Angel Olsen may be part of Bonnie ‘Prince’ Billy’s Cairo Gang and has toured with him as part of his ensemble frequently, but let that be all that’s necessary to speak of it, as Olsen is a distinctive enough musician that she doesn’t require a jumping off point or the patronage of another cult artist to make her noteworthy. In fact, there are not a lot of points of comparison between her and the multiple aliases of Will Oldham, beyond a clear appreciation of and immersion in a loping, emotive form of Americana. Her new record, Half Way Home, doesn’t vary much in terms of instrumental style or sound, but is carried primarily by her incredibly distinct vocals.

Following Strange Cacti (2010), Half Way Home is an odd record, without ever sounding particularly odd. The fundamental structures of the songs remain largely consistent from track to track; it’s comprised of 11 mid-tempo, largely acoustic numbers with meandering melodies, mostly anchored by guitar and the occasional deep bass notes. On paper, that doesn’t sound terribly distinctive, but Olsen manages a neat hat trick, to make what could easily be an album of soporific, not clearly defined songs sound distinctive through sheer force of vocal power and emotion. It is worth noting that the production work of Emmett Kelly (also of the Cairo Gang) generally buries the instrumentation low in the mix, even the guitars that ostensibly carry most of the burden of melody. Instead, the songs are defined more by their rhythm, with bass guitar coming in almost to remind listeners that there’s something under Olsen’s voice and percussion so loose and quiet as to forgotten.

At times, Half Way Home approaches the genre of alt-country, loose and nebulous as the term may be. But it really is even broader than that, though Olsen doesn’t seem to be striving for some kind of Cosmic American Music (to use Gram Parsons’ indelible term). It’s more as though her music wanders from touchstone to touchstone, nearly becoming folk here, nearly country there, a lick of electric guitar for pop effect, then a dramatic vocal phrasing that contradicts that. In tracks like “The Sky Opened Up,” Olsen sounds ominous and nearly conversational over a rumbling bass line, singing, “No one will ever love you for yourself/ Even if the world is ready to help.” On opening track “Acrobat,” however, she introduces herself with a keening, warbling tone that speaks more through sheer intensity than through lyrics. It’s a voice that haunts you immediately, that sounds both of another world and deeply human all at once.

While the album is distinctive as a whole, sometimes the aforementioned formula of the songs does grow repetitive, even with the force of the singer above and behind them. “Always Half Strange” doesn’t improve on the intensity of “Acrobat,” but does use essentially the same tools for lesser effect, which is a pity in a relatively short album. Fortunately, there are more than enough bright spots (like comparatively lush “Lonely Universe”) to make up for a certain amount of sound-a-likes. It’s a remarkable album from a young songwriter, one that manages to compensate for what could be weaknesses, and sometimes even transcend them.