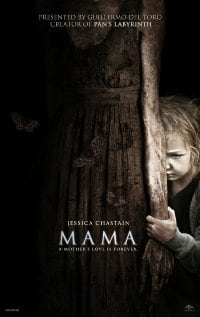 [xrr rating=1.25/5]If for anything else, the release of Mama will mark the first truly heinous film starring Jessica Chastain. The winds of Golden Globe and Oscar glory will push moviegoers into theaters to see the diminutive star in this poorly executed horror flick. Unfortunately, and please excuse the pun, Mama really blows.

Once upon a time, Universal Pictures released Andrés Muschietti’s first film in the netherworld of January, slapping Guillermo del Toro’s name on the production to give it credibility. Using executive producer del Toro’s good name is about the only thing that makes sense in this horror tale about a ghost of a 19th century nutcase who leapt from a cliff with her baby in tow and now haunts a cabin in rural Virginia.

In the film’s prologue, a suicidal father loses himself in the woods with his two young daughters. Upon stumbling upon the cabin, the father attempts to take out his kids first, but not before the ghost kills him. Her maternal instinct kicks in and she raises the girls as her own. Fast forward five years and two trackers find the cabin, bringing the feral children back to civilization. But then Mama follows them…

Adapted from Muschietti’s three-minute short (that should be warning enough) and rated PG-13 (not a great sign for a horror flick), Mama relies on creepy children and jump scares to deliver the goods. There is something innately terrifying about the nature of motherhood and longing that Muschietti could have explored, but instead he goes for the cheap spook rather than focus on the more chilling, psychological horror at play here.

Co-written with Neil Cross and Muschietti’s sister Barbara, the incoherent script eventually sinks the film further into ineptitude. Not one, but two characters venture out into the woods. Alone. After dark. A subsidiary character gets a voiceover for no reason right in the middle of the film. One of the protagonists drives off into the forest and her lost husband happens to step out onto the road right when she zooms by. Mama tries to murder both protagonists and then supplies them with dream visions to help them crack the case. It makes no fucking sense.

Worst of all is Chastain’s character Annabel, a petulant little punk rocker (she plays bass in a band). We first see her tattooed, black-licorice-eating character celebrating a negative pregnancy test. How much do you want to bet she finds that maternal instinct by the film’s end? So go ahead, be a rebel. Disobey Mama and don’t give her your money.