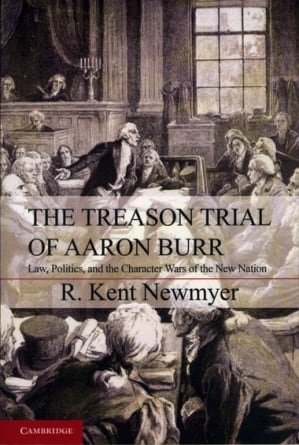 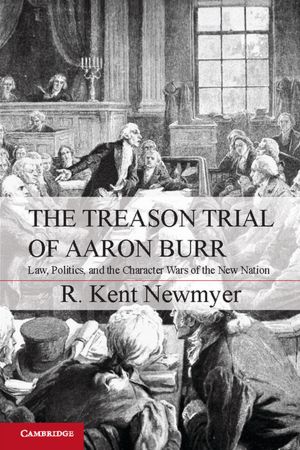 By 1807 Aaron Burr had burned countless bridges and had a list of enemies a mile long. That Burr was one bad dude was probably never in question then – only one man walked away from that 1804 duel with Alexander Hamilton, and it wasn’t the one whose mug’s on the 10 dollar bill – but to many of his contemporaries and to the general public he was perceived as everything from a lout to a man of few scruples and even less morals. Burr made foes of all the right, or wrong people as it were, particularly President Thomas Jefferson. Indeed, it was largely due to the president’s aggressive intervention that Burr was brought to trial in 1807 on treason charges stemming from his alleged attempts to separate some of the western states from the Union.

It’s this slice of early Republican judicial brouhaha that forms the basis of R. Kent Newmyer’s The Treason Trial of Aaron Burr. In careful, painstaking detail that sometimes borders on the tedious, the author offers an overview of the events leading up to Burr’s trial and, more importantly, what transpired during the trial and how it shaped the future of American jurisprudence. Newmyer’s text centers around three major players: Burr, Jefferson, and judge John Marshall. Though Burr has throughout history generally been depicted as little more than a scoundrel, Newmyer does at least flesh him out a bit, adding some layers of complexity to both his life and personality. By contrast, the widely-revered Jefferson actually comes across as the villain of this tale. As Newmyer convincingly demonstrates, the president abused his executive authority and essentially betrayed his own republican principles as he actively sought to ensure Burr was found guilty; most infamously, Jefferson publicly declared Burr guilty prior to the trial even starting.

If there are any heroes to be found here, in Newmyer’s view it’s several of the lawyers who participated in the trial and, more so, Marshall, who found himself in the unenviable position of having to navigate through social and legal landmines throughout the proceedings. Though the author is clearly fond of Marshall as a legal figure, it is with good reason: Marshall seemed uniquely suited for the trial and its various extenuating circumstances, most notably a vocal public and press who largely wanted to see Burr hang and an interventionist president willing to operate well outside the confines of the law to ensure Burr’s conviction. Of particular note to students of law will be the ways in which Marshall weighed the legacy of British law – particularly the definition of treason and how that definition evolved – against the emerging nature of the new republic.

The Treason Trial sometimes gets bogged down in legalese and assorted minutia, while Newmyer tends to periodically write in a dry manner reminiscent of academia at its most exhausting. Some sections – especially those in which the author does a very deep dive into the evolution of treason law in jolly old England – are certain to appeal to law professors and not much of anyone else. The text also assumes more than a passing knowledge of American history, and though this is by no means a flaw, casual readers might find the book, despite its relative brevity, somewhat daunting. If you can still recall the importance of Marbury v. Madison without checking online, this book just might be for you.