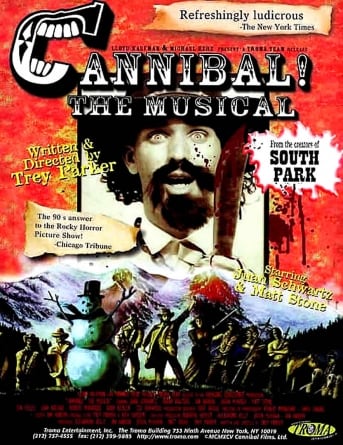 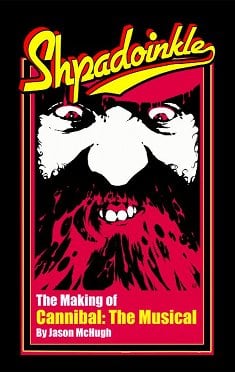 Before “South Park” co-creator Trey Parker made his mark on Broadway with The Book of Mormon, and even before he reinvented the modern silver screen musical with South Park: Bigger, Longer and Uncut, he created the independent cult classic Cannibal! The Musical. The feature length film, shot while Parker was a senior in college, was picked up by Troma Entertainment (The Toxic Avenger, Class of Nuke ‘Em High) and released on home video a solid year before the first episode of “South Park” aired on Comedy Central. Ambitious and excellently executed, especially for a student film, Cannibal! still has a loyal worldwide audience today. The film’s even spawned a stage adaptation that, in some cases, has resulted in controversial public performances. Cannibal! is the type of word-of-mouth underground phenomenon that won’t go away, and its legacy has never been documented in a more detailed way than in producer Jason McHugh’s Shpadoinkle: The Making of Cannibal! The Musical.

The story of Cannibal! is interesting for both its circumstances and unique successes. The film re-imagines the expedition and trial of Colorado legend Alfred Packer, the only man convicted and sentenced to death for cannibalism. A running gag on Parker and company’s CU Boulder campus, the film geeks banded together and turned the true tale into a whimsical feel-good musical. However, making a movie is hard. Making a wholly independent musical while balancing college studies and then attempting to sell it is near impossible. Still, Parker, McHugh and company did it and this book explains how.

Part history, part “How to” guide to independent filmmaking, Shpadoinkle strikes the perfect balance of inspiration and explanation that will motivate aspiring filmmakers and the director-curious alike. More than just pointers on editing and keeping actors happy on the cheap, Shpadoinkle follows the licensing, promotion and eventual branding aspects avoided by the more glamorous (and less interesting) filmmaking books. Even considering how much the film distribution and indie promotional world has changed in the 20 years since Cannibal!, McHugh’s lessons in Shpadoinkle are timeless, especially comings from a voice honest enough to say exactly which byproducts of being fresh out of college in Hollywood lead to less-than-productive uses of time. The book also details the largely untold story of the Sundance alternatives that are now commonplace annually in Park City, Utah.

Shpadoinkle succeeds as something of a book of parables for anyone brave enough to enter the film world. While not everyone who embarks upon creating a feature-length musical will reach worldwide distribution, a Hollywood executive bullshitting you to write Lethal Weapon, an Arizona school-board banning your creation or even the chance to make a joke about one’s ex-girlfriend on MTV, Shpadoinkle makes such lofty goals seem downright possible and, more importantly, plausible. Even fans of the movies not interested in filmmaking themselves will enjoy the sticky nitty-gritty about the truly extensive and bizarre journey of how Cannibal! came to be. While Cannibal! may still be a few years away from being a cinema studies staple, one could make a case for Shpadoinkle as the definitive guide to beginner independent filmmaking in desperate situations.

Chaz Kangas is a walking Wikipedia, a World Record-holding rap artist and proud writer for Spectrum Culture. When he's not captivating audiences with his critically acclaimed approach to Hip-Hop, he's covering music, film and pop culture's highbrow and low-brow, putting them together for an entertaining unibrow and bringing them to your computer with a smile. He's guest-lectured at Fairfield University and has written for the New York Times, Complex and LA Weekly. He'll also freestyle for you about anything at the drop of a dime, with it yet to be determined what he'll do for a quarter.