Get Carter is one of the all time great gangster flicks, a masterpiece of crime cinema that could have never been made any earlier than it was. By the beginning of the 1970s, the infamously rigorous British censorship system had begun to buckle under the experimentalism of the previous decade and changing social mores. Suddenly, what was acceptable to be shown on screen was up in the air, and filmmakers seized that opportunity. In particular, the genre of crime films found itself increasingly able to dispense with notions of morality and ramp up the violence and sexuality that was always implicit in earlier masterpieces like Brighton Rock (1947).

Released in 1971, Get Carter was a decent commercial success, but suffered from reviews that found the moral relativity of the plot troubling. Fortunately, time has a way of rescuing lost diamonds, and after a period as a cult favorite, the film has been consistently recognized as perhaps the most quintessential example of its genre. Much of this has to do with the performance of Michael Caine as title character Jack Carter. Caine was at the height of his stardom in 1971, coming off the successes of Alfie (1965), the first three installments of the Harry Palmer franchise and The Italian Job (1969), which made his involvement in a relatively low budgeted film that was originally rated X in the United States all that much more intriguing. The actor was apparently fascinated by the character of Carter, a working class, Northern England-born thug rising in the echelons of the London mob. He described Carter as being an alternate version of his own life, or “…the dead-end product of [his] own environment, [his] childhood.” 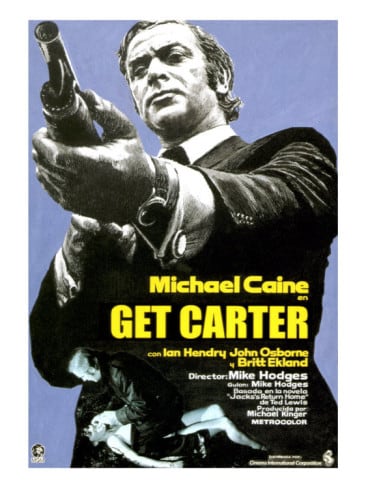 And Carter himself is the most fascinating part of the film. Though the movie sometimes grows labyrinthine in its plotting, Carter is a strange combination of the direct and the ambiguous. Returning to his native Newcastle after the supposedly accidental death of his brother Frank, Carter sets out for an explanation, willing to do whatever’s necessary to get retribution. People are brutalized and intimidated, whether they’re fellow gangsters, women or allies. Whenever Carter finds an obstacle, he simply maneuvers around it or breaks whatever is in his way, sneaking onto the country manor of local boss Cyril Kinnear (famed playwright John Osborne in a rare film role), crashing an underage house party or smashing someone’s head through a car window. But while Carter’s actions and motivations are straightforward, Caine’s portrayal of the gangster is perfectly opaque. Throughout the film, Carter rarely offers explanations, either to other characters or to the audience. Instead, his implacability is part of his strength, his mask of indomitability only falters in two key scenes in the entire story.

That sheer inscrutability is one of the key elements of Get Carter. While the plot could be considered a revenge story, there’s no sense of morality ever at play. Carter never pretends to be searching down his brother’s murderer for any reason other than to kill them; he never explains away his motivations as justice or justified. Instead, he just acts, and violence inevitably ensues. As directed with chilly quietness by Mike Hodges, the 1971 Get Carter is breathtaking in its own ruthlessness, paralleling that of its protagonist. It doesn’t attempt to teach a moral lesson about the nature of revenge or honor. Even the ending is flatly nihilistic, serving only to show the outcome of the players’ actions without commenting, condoning or condemning them. Combined with Caine’s natural charisma and willingness to portray Carter without glorifying him, it’s a perfect movie of its genre.

The same cannot be said for the 2000 remake of the same name. In fact, insofar as it belongs to the genre of pointless remakes, it might be one of the most misbegotten films ever. While the Sylvester Stallone-starring, Stephen Kay-helmed movie is not truly terrible on its own merits, it fails on every level to understand the subject matter it is ostensibly based on. In a certain light, that’s almost impressive; it takes a severe kind of cinematic myopia to take everything that was interesting and unique about the original and move on the opposite path. If it was a better film, one could almost wonder if that was intentional, if by so relentlessly misunderstanding Get Carter, the filmmakers were making some kind of commentary on it. But frankly, that’s just clutching for some kind of redeeming value that doesn’t exist. 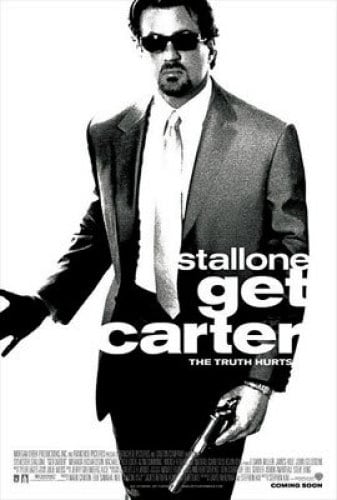 While Kay may have directed the 2000 Get Carter, his undistinguished career before and since implies the real power behind the film: Stallone. While the remake hits the beats of the film with unthinking precision, the real intent seems to be to make a classic story into a generic action vehicle for Stallone. In 2000, the actor had overcome a series of bombs and made a few tepidly received but profitable action films (Cliffhanger and Demolition Man, both in 1993). But while Carter would prove to be one of the more distinctive and iconic character’s in Caine’s long career, Stallone’s Carter comes straight off a character flow chart in a bad action writer’s office. Substituting Las Vegas for London, Stallone as Carter is a shiny-suited, goatee-sporting mob enforcer, first seen shaking down a deadbeat with partner Con McCarty (John C. McGinley) and introducing himself with the attempted catchphrase: “I’m Jack Carter…and you don’t want to know me.” While the remake utilizes several memorable lines from the original, word for word, the stab at giving Carter an intimidating byline falls flat. Even the movie seems to know it, with the deadbeat in question asking if another line is “some kinda catchphrase?” in an annoyingly meta way before getting punched in the face again.

But the 2000 Get Carter’s central flaw isn’t that it plays as a generic action thriller, with Seattle filling in for Newcastle and Mickey Rourke as sleazy antagonist Cyrus. It’s that it doesn’t understand that the story of Get Carter is not a quest for redemption, it’s a flat portrayal of the effects of violence. In the remake, Stallone’s Carter is repeatedly told by other characters, including his brother’s widow (Miranda Richardson) and Cyrus, that he’s not a “good guy.” Frankly, that that needs to be pointed out shows just how badly the film misunderstands that Carter is not meant to be a tortured soul trying to come to grips with his flaws and atone for his sins. He’s a man whose character is defined by his acceptance of the world he lives in, dark and violent as it may be. He’s not struggling to be a good man. In fact, he never even considers that he might be.

Even worse, the style of the film itself misses the point of the 1971 version. Hodges shot his film in an evenly paced, deliberate manner, utilizing Newcastle locals for extras and taking advantage of the chillingly industrial nature of the city, and Caine played against action stereotypes by keeping Carter’s brutality efficient and unglamorous, frequently keeping his physical violence sharp and sudden and quick. By contrast, Kay uses a slick, time-lapse heavy style throughout the film, having characters flicker in and out in a manner that doesn’t particularly suit anything. Even more tellingly, Carter is shown brutalizing people from the first moments of the film and continuing for relatively little reason throughout, in tightly framed, high speed fistfights designed to show off Stallone and Rourke’s boxing prowess. Perhaps most egregiously, there’s an early scene in which Carter beats up a thug in a restaurant kitchen, slamming him into counters and then, for literally no reason, casually tossing a sheet pan on his head once he’s unconscious. It may suit some notion of coolness in violence, but completely unsuited to the character.

The divide between the 1971 Get Carter and 2000 version could not be more pronounced if a filmmaker set out to make a completely different film with essentially the same plot. While the remake is by no means a good movie, it’s a serviceable effort of its type, providing some grit and violence and Stallone growling. Only when it’s compared to the original, does it become fascinating in its misguided attempt to update what was already thoroughly engaging and well thought out.