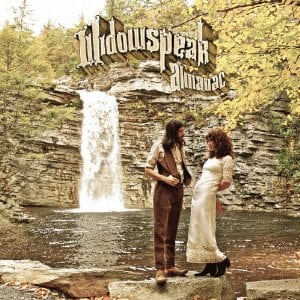 [xrr rating=3.5/5]Dealing in the type of hazy, aloof indie rock that is Brooklyn-based Widowspeak’s stock and trade can be a dicey venture: it’s all too easy for bands to get lost in their own dreamy atmosphere, leaving behind listeners who haven’t been initiated with a heavy dose of Nyquil. Music of that sort runs a far worse risk than being bad – it risks being boring, the cardinal sin of art. Speaking as an ardent fan of Mazzy Star/Cocteau Twins/et al, I’d rather listen to hair metal at its most offensively indulgent, made by leather-clad coke fiends without a molecule of self-awareness, than have to suffer that really far out dream pop band that reeks of stale bong water and is really just about the atmosphere, man. Thankfully, this is not the case with Widowspeak’s second album, Almanac, which finds the self-described “cowboy grunge” (a grave misnomer in the wrong context) outfit expanding their sound and building on the sparser arrangements of their self-titled debut LP.

We might as well get it out of the way now; if voices could be trademarked, Hope Sandoval would have Widowspeak vocalist Molly Hamilton over a barrel. The similarity between the two stands to benefit the Mazzy Star singer the most, given her pedigree, but to dismiss Widowspeak as mere knockoffs would be a disservice to what they’re doing right on Almanac, which is mostly everything. The interplay between Hamilton’s beguiling vocals and guitarist Robert Earl Thomas’ darkly deserted riffs is still here, but where the first album sounded like a sedated horseback ride through an acid western, the band’s follow up is a bit more bucolic, adding autoharp, organ and accordion to the mix, giving the material an added dimension.

Opening the album with the crackle of vinyl and some strummed autoharp, “Perennials” eventually glides into what now could be called a patented riff and an inviting vocal by Hamilton before a wave of guitar washes the song back to basics. As Hamilton chants the closing lyrics (“I’m afraid/ Nothing lasts/ Nothing lasts/ Long enough,”) she hints toward another trend on Almanac: a prophecy of repetition and slow motion.

That trend ultimately comes to fruition. While tracks such as “Thick as Thieves” and “Minnewaska” make the most of the expanded palette, trading in the drum kit for the swaying, folky rhythms provided by the band’s newfound arsenal of instruments, the album can sometimes rely on its audience to color in the spaces left blank by the band. Hamilton’s sedated vocals and Thomas’ forays into spaced out noise are a fine backdrop for some incense and a page or two of, say, late T’ang Dynasty verse (appropriately spacey), but can prove fatiguing over the course of the album’s 41 minutes. It’s a shame, because the album’s second side has a lot to offer if you can keep your eyes open. “Sore Eyes” spreads out a Western range spanning into a dusty abyss, and closer “Storm King” gradually billows in and builds as if it were heralding the coming of its namesake, but these are visions that reveal themselves to the privileged few willing to take the trip.

Part of this is no doubt a conscious decision: Widowspeak have fully copped to the listening curve that comes with their sound, and this album is more of a grower than their first. In an interview with the Village Voice, Hamilton acknowledged that “it takes a couple of listens, you need to get into our world a bit,” and that sentiment is truer now than before. Still, on tracks like “Ballad of the Golden Hour,” which, with its briskly strummed opening almost threatens to be cheery, the band finds a way to let the hooks share space with the atmosphere. In all, Almanac proves to be a step forward for a band still early into its career. With a little fine-tuning, it’s safe to expect them to bring some of the haze into focus.

Lilacs and Champagne: Danish and Blue

[xrr rating=2.5/5]The thing about drugs and music is that, once the air clears and the che…