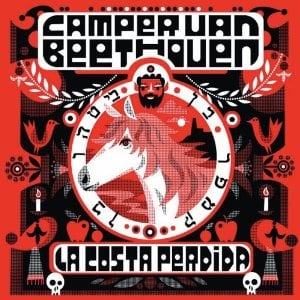 [xrr rating=3.25/5]Camper Van Beethoven has always been a meeting point of diverse musical visions finding common cause. Their punk directness was once ornamented with surrealistic exploration and they tempered their distorted guitars with folk instrumentation. The band established a unique sonic blend that was as recognizable as David Lowery’s nasal vocals. More recent reorganizations would result in Lowery focusing on pop-infused alt-rock with a thick streak of sarcasm in Cracker, but Camper Van Beethoven’s songs were always more complex, whether conveying subtle moods or creating complicated narratives.

An older, more weathered version of the band is back for La Costa Perdida, but they resurrect their hallmark sound with a jumble of musical influences and sense of surprise. The wistful folk of “Come Down the Coast” coexists with the rocking blues of “You Got to Roll” and the trippy pastiche of “Too High for the Love-In.” In lesser hands, the contrasting tensions would reduce the album to a muddle of unrelated ideas, but the band uses these perspectives to build a nuanced sense of California, both past and present. This picture is too vaguely structured to be a concept album, but the thematic thread allows the ripples from one tune to rock another.

La Costa Perdida’s California is a place where love’s promise is still possible, though not fully realized. It’s where self-obsessed paranoia can be overwhelming and where the frantic meet the fatalistic to try to find their places. In addition to their normal elements, the band uses the mod, easy-listening sound of the 1960s and early ‘70s as a touchstone to evoke California’s past. Strings and sweet backing vocals drive the lazy sway of “A Love for All Time,” evoking the Carpenters preserved in amber. The opiated languor on “Someday Our Love Will Sell Us Out” defangs the lyrical pessimism, leaving an almost cheery acceptance.

Lowery’s voice still holds traces of his trademark sneer, but he sounds wearier than he did on his recent solo outing, The Palace Guards (2011). On tracks like the title song and “Northern California Girls,” that raw tone fits the laid-back, restrained delivery. Despite its AM-radio-pop fade-in, this latter cut drifts into Jimmy Buffett territory. While Parrotheads would feel at home, Jonathan Segel’s violin anchors the song in the classic Camper van Beethoven sound of “Sad Lovers Waltz” (II & III, 1986) or “Good Guys and Bad Guys” (Camper Van Beethoven, 1986). As Lowery relays the siren call of the girls luring him back to the coast, he’s clearly resisting their entreaties. It sounds like he’s running from his past, but maybe he’s just trying to escape from the allure of surrendering to the flow. Either way, his resolve is weakening.

Eastern European tension underlies “Summer Days.” The instrumental first quarter suggests that Lowery lost his fight and has returned to his lost coast. When the lyrics come, they’re full of nostalgic regret. The song circles and builds into a series of peaks separated by brief moments of relief, and a sense of doom pervades the song, suggesting that we’ll all one day have to face our past.

Along with psychedelic guitar jams and Gypsy violins, Camper Van Beethoven has always included a dose of country-folk grooves to round out their sound. They continue that tradition here. “Peaches in the Summertime” serves up a hyper “Cotton-Eyed Joe” styled romp and “La Costa Perdida” harnesses conjunto for its loose narrative. It’s here that Lowery sums up the character he’s voiced for the whole album: “I’m a half-aware-o caballero Yanqui/ From a town just south of Brawley.”