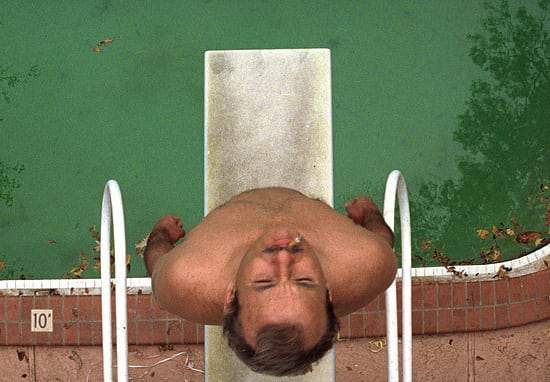 Who are your favorite comedic actors? Think throughout the history of film. Chaplin? Keaton? Hepburn? What about more recent performers? Will Adam Sandler, Jack Black and Tina Fey live on and be remembered with the greats? Only time will tell.

Comedy is a slippery thing. What one person finds comic, another will not even crack a smile. Only a few comic performances are considered ubiquitous, telegraphing through space and time to make people laugh, people whose parents weren’t even born when the performance was committed to celluloid. These are the greatest roles and they still mean something, no matter your preferences.

We here at Spectrum Culture have decided to revive our Year by Year feature with the best comedic performances ever in mind. We pored through every screwball comedy and crappy SNL-inspired flick to create a list of the comedic performances from 1930-2010. The only rule? We could pick only one selection per year. Some years were easy, others nearly impossible to find one worthy suitor. Most difficult of all were the ones were numerous actors could have been the victor. Seriously? Cary Grant vs. Katharine Hepburn in Bringing Up Baby? How does one choose? But what we did learn is that year after year, there are some great actors and actresses that will live on forever. I hope you enjoy the first part of this feature – David Harris 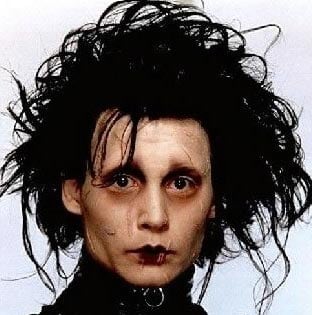 While the selling point of Tim Burton films tends to be his grim insistence on enforced whimsy, his densely dark humor is often buried beneath morbidity. Edward Scissorhands, his first collaboration with BFF Johnny Depp, skewers the conventions of horror films and suburban life in equal turn, but it’s Depp’s performance as the title character that truly makes the movie. As Edward, Depp channels the spirit of silent movie comedy, barely speaking throughout the film and even then, only in a tiny fragile whisper. Instead, he lets the physicality of his character carry the humor, evoking both the bashful clumsiness of Charlie Chaplin and the stone-faced reaction of Buster Keaton. Whether it’s his wordless panic at his titular appendages stabbing a waterbed or his unexpectedly ninja-like prowess at intimidating school children, Depp wrings every drop of humor out of his waifish body language and gentle face. And also his giant, deadly scissors. – Nathan Kamal

1991: Raúl Juliá in The Addams Family

When Raúl Juliá passed away in 1994, the world lost a fine Shakespearean actor and a great humanitarian. But as The Addams Family shows, we also lost a fantastic comedian, a man completely willing to sink himself into a ridiculous, over-the-top character and just run with it. Gomez Addams, the patriarch for a family of weirdos, freaks and disembodied limbs, is a man with a zest for life despite his familial morbidity, and Juliá plays it to the hilt. While many an actor might play up only the suave, debonair aspect of an uber-rich, pathologically creepy socialite, Juliá plays him as a Goth answer to Errol Flynn, shouting to the heavens and giving into to every whim of emotion that might flutter by. It’s an energetic, hilarious role, all the more unexpected coming from an actor more well known for his dramatic roles. En garde, Gomez! – Nathan Kamal 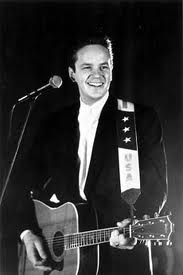 1992 was a pivotal year for Tim Robbins. Right when he was at risk of being forever pigeonholed as the lovable dullard, Robbins spun his image right around by playing the scabrously authoritative studio executive Griffin Mill in The Player. A few months later, Robbins’ directorial debut, Bob Roberts, hit screens and the actor’s knack for tapping into reservoirs of deviously dark humorous intelligence was fully verified. Besides writing and directing, Robbins plays the title role, an archly conservative Pennsylvanian candidate for U.S. Senate who has shrewdly adopted the populist techniques of the left, such as folk songs and eschewing any and all fancy trappings for an of-the-people campaign across the state in a humble bus. A noted lefty himself, Robbins clearly takes special relish in the scathing satire of this serpentine character, masking hatefulness with a grin marked by canary feathers between the sharp teeth. The sitting senator Roberts describes catching a “whiff of sulfur in the air” during a debate, and part of the joy of Robbins’ wickedly funny performance is that he captures the inner menace of the character who could inspire that observation. – Dan Seeger 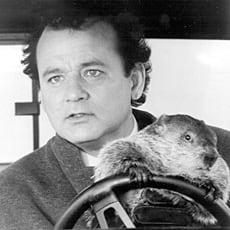 Like most great comedians turned actors, Bill Murray’s best roles are the ones that allow him suitable space to riff on his own preformed comedic persona, providing a reasonable excuse to slot this kind of performance into a cinematic package. One of the best such structures for Murray, or anyone for that matter, is the recursive dream world of Groundhog Day, the repetition of which gives him license to offer a variety of different responses to the same general series of events. Murray gets a chance to show off his burgeoning dramatic chops as the film’s tone turns more serious, but the increasing madness of the first two acts, with Murray’s character sliding from disbelief to joy to frustrated exhaustion still makes for the most potently hilarious performance of his career. – Jesse Cataldo

Oliver Stone’s wildly uneven Natural Born Killers indulges in a chaotic aesthetic that contrasts an artificially pleasant world portrayed in American entertainment with unimaginable, but very real cruelty. Rodney Dangerfield gives an astonishing performance as psychopath Ed Wilson, who has been raping his daughter for most of her young life. Dangerfield’s usual stand-up shtick dealt with anger and violence in a roundabout way, his disgusted expressions and jittery stage presence making him look like he could break loose from his emotional moorings at any second. Yet his humor was turned inward, the humiliations of his life revealing a helplessness that he could only come to terms with by asking for metaphorical commiseration from his audience. Though this shtick bled into real life, often on full display even in interviews and personal appearances, Dangerfield completely dispensed that persona for Natural Born Killers. He does not deliver one-liners. He does not metaphorically wink at the audience when he grabs his daughter’s ass. The abuse he hurls is without double entendres or puns or anything to distinguish it from actual abuse, except for the laugh track and Edie McClurg’s purple wig. Dangerfield is completely fucking frightening, his behavior forcing the audience into laughter as a necessary emotional release. – Stacia Kissick Jones 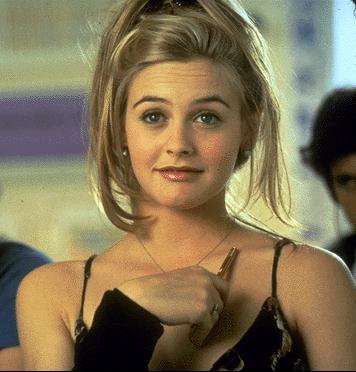 Clueless brought Alicia Silverstone into the limelight with her ditzy Cher Horowitz, a 16-year-old fashionista whose wealth, popularity, and good looks are mere adjuncts to her more valuable talents: as a lawyer’s daughter, she knows how to talk herself out of any situation, and yet her made-out-gold heart has her using it to fight for good, not evil (namely in the game of matchmaking). Cher’s character may seem sexist by today’s standards, but she was clearly written as an endearingly likable parody of the Valley Girl, with an impeccably satirical, on-the-nose adherence to gender ideals that easily fall to the backburner in the film’s pursuit of more virtuous and nuanced themes. Silverstone brings a youthful elegance to the role, yet she also manages to also capture Cher’s wide-eyed adolescent naiveté. Take, for example, her speech comparing uninvited guests at her dad’s birthday party with Haitian immigrants in the U.S. Hers is a vapid comparison inviting a facepalm, and yet she still manages to get the point across, if not in clear imagery, than in vocal articulation: “May I please remind you that it does not say RSVP on the Statue of Liberty?” – Tina Hassannia 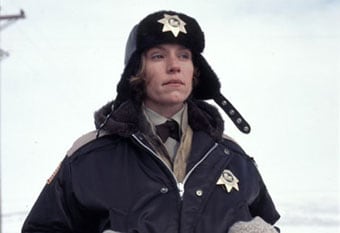 The Coens’ ironic, caricature-laden canon has always prompted tut-tutting over their supposed disdain for their characters, yet Frances McDormand’s performance as Marge Gunderson in Fargo offers a dramatic corrective to this lazy criticism. A pregnant police officer whose comfortable routine is shattered by the intrusion of violence into her community, Marge toes the line between a carefree and sweet rube and, when the chips are down, a shrewd detective. McDormand’s nasal Minnesota accent, leaving some words chirpily clipped and others interminably drawn-out, could almost be the film’s score. It is a comic bending of strings that can be as pleasant as it is intensely off-putting (see: the scene in which she asks William H. Macy’s hapless mastermind innocuous questions). Rarely has one of the Coens’ aw-shucks creations been so blatantly heroic even as McDormand never lets her aw-shucks humor flag. – Jake Cole 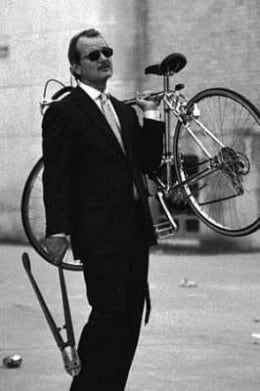 Now that stories of tracking down the elusive Bill Murray are traded as freely as Chicago Cub baseball cards, it seems all the more remarkable that an oddball director named Wes Anderson, with only one little-seen feature to his name, was able to land the comedy demigod for the part written just for him in his sophomore effort, Rushmore. Murray plays manufacturing magnate Herman Blume, who finds himself ensnared in an odd love triangle between the lonely, ambitious kid he’s befriended (Jason Schwartzman) and a lovely prep school teacher (Olivia Williams). Blume is an unhappy man, and Murray manages to ingeniously find the humor in scenes ringing with pathos. If the cult of Murray sometimes seems a touch too enthusiastic these days, watching him in Rushmore is a reminder of why the cult swelled in membership in the first place. It takes a different kind of talent to find the comedy, heartache and healing pride in a simple line like, “I’ll take Punctuality.” – Dan Seeger 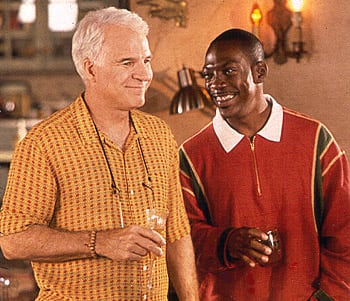 Eddie Murphy was already well on his way to becoming a punchline by ‘99, but his work in Bowfinger offered one of the last glimpses of his old genius. Splitting time between playing arrogant, paranoid movie star Kit Ramsey and Jiff, the gangly nerd used as his substitute, Murphy shows a willingness to be the butt of a joke he never again fully revealed. As Kit, Murphy gets to tear down his own star persona, whether through his outlandishly demanding behavior or a brazen willingness to poke at some of the sex-related gossip he had perhaps only just outpaced. As Jiff, however, Murphy gets to show off an equally rare side of his personality. Jiff provides him with one of his best, most fleshed-out caricatures, a lovable fool whose gormlessness is his most debilitating and endearing trait. If Kit allows Murphy to wildly spoof himself, Jiff, who is no less funny as he darts terrified through traffic for the sake of the shoot, allows the actor his unlikeliest and greatest outlet for empathy. – Jake Cole