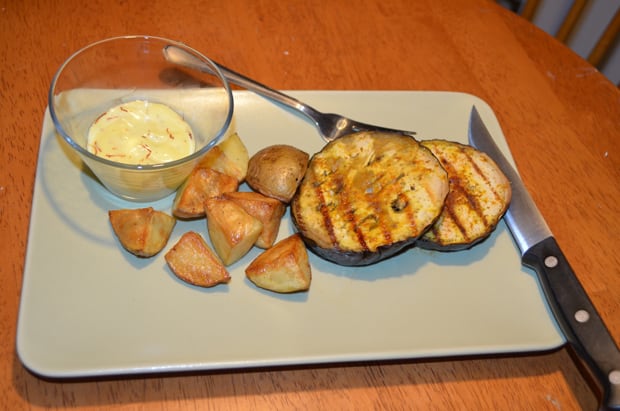 @A_schulz asked @SpectrumCulture Eggplant! I want to like it but have never found a method of preparing it or a recipe that has been good. Help?

We want you to like eggplant too, April. As it happens, I’ve been giving eggplant a lot of thought lately. About a year ago, I found out I was allergic to red meat because of this nasty thing. Since then, I’ve been searching for something that could fill the steak shaped void left in my cooking routine. This proved difficult at first, especially trying not to lose it as person after person suggested that turkey burgers were not so bad (they are). I gradually came to terms with a beef-less existence and now that hole has been filled by a variety of different things to grill. Whole mushrooms, spatchcock chickens and olive oil and lemon soaked kale leaves to name a few. The closest thing I’ve found though that replicates the textural contrast that a good steak provides isn’t even a protein at all: it’s grilled eggplant. Sliced into inch thick rounds, “seared” over medium high heat and finished on the cool side of the grill, the outside stays relatively firm before yielding to a tender, buttery interior. You can even serve it with a steak knife, following the time honored steak eating ritual of cutting pieces as you eat, and pretend that it’s not big deal that you’re most likely never going to have a decent burger for the rest of your days.

There were so many ways to take the vegetable, from simple ratatouille or eggplant parmesan to something slightly more complex like the classic Italian preparation of sweet and sour eggplant called caponata. I’d urge you to delve into those recipes too (they’re easily Googled) to get a feel for some eggplant dishes.

Prepare the mayo first and refrigerate while you grill the eggplant. Take note: homemade mayonnaise contains raw egg. If this kind of thing makes you squeamish then don’t make it. However, I’ve made this countless times and never gotten sick.

Combine all the ingredients except for the olive oil in a food processor. Turn it on and drizzle the olive oil in as slowly as possible (most food processors have a special cup at the top that has a small hole at the bottom of it to do the drizzling for you). Process until all of the oil is incorporated, place into a container and refrigerate until the eggplant is ready.

Combine all of the spices in a small bowl. Place eggplant rounds on a baking sheet and liberally coat them on both sides with the spice mixture. Drizzle the rounds with honey on both sides and resist the temptation to spread the honey as it will clump if you do so. Cook the eggplant rounds for 2-3 minutes on each side, just enough to mark them, and then move them to the “cool” the grill. Put the cover on and let them slowly cook for 20-25 minutes. Serve immediately with the mayo.