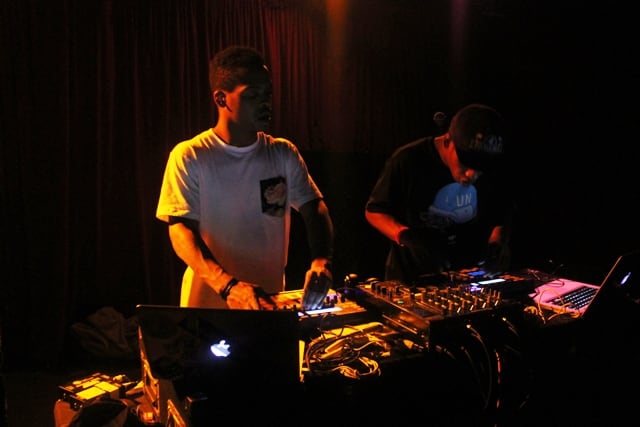 At times, it is frustrating to be a music fan in a mid-market. Sure, Cleveland has no less than six trusted venues for live performances, but sometimes the people from North East Ohio simply don’t show up. Be it poor promotion, a weak economy, disinterest or conflicting performances, so often artists are not playing in front of the crowd their skills and live performance history warrant. On Saturday evening, the twin brothers (Sherwyn Nicholls and Kendrick Nicholls) behind Denver’s Two Fresh turned up at the Grog Shop to promote their newest EP dubbed Watch This, the audience just didn’t follow, in terms of numbers or energy.

Cleveland’s Grog Shop is well-respected, but tiny. More than a concert venue, the 400-person capacity establishment feels more like a bar with an overgrown stage dominating one side of the room. However, the venue’s owners have never shied away from sound, developing a massive sound systems based around eight speakers capable of 110db of distortion-free raw power. This fact alone often helps fill the venue for underground talent, but on Saturday evening even the local talent of Smoke Screen and Brian “Blackbird” couldn’t generate an audience of more than a few dozen revelers. This may have cut into the bar’s profits, but for diehard fans of the evolving hip-hop aesthetic, it just meant more room for gyration.

Opening the night, MCs Chemist and Mooke, known collectively as Smoke Screen, proved they are a duo worth keeping an ear on. While each took their turn at the mic for rapid-fire verses, it was Mooke who spent the majority of the time up front while Chemist doubled-down as the DJ/producer. Like the area’s beloved KiD CuDi, Smoke Screen bolstered the party starting abilities of their set with a healthy dose of electro-punch added to their alternative hip-hop. Given the hip-hop appeal of the headliner, the pair were the perfect local outfit to heat up the crowd.

The same cannot be written about DJ Blackbird. Currently being booked by Sphere Productions, the same company that hosted the event, his placement on the bill was most likely aided by this relationship. The bass-heavy set would have been an appropriate early evening set for producers across moombahton or liquid bass, but the vibe of the set just did not work with those from Smoke Screen or Two Fresh. Exploring the underground depths of bass music, Blackbird can be credited with not playing worn out tracks by the amorphous scene’s heavyweights, but the inclusion of more hip-hop or the genre’s more energetic derivations could have kept the audience from rushing back to the bar for excessive lubrication.

Similarly to their 2012 Ingenuity Fest performance, Two Fresh decided to forego the drummer that has historically accompanied their live set. The visual of the live drummer adds a multi-sensory level, but that layer also becomes a burden when the duo want to swiftly transfer between tracks, tempos and bass rhythms. Unlike some shows in the past, the brothers also decided against emceeing during their own tracks, going with a purely instrumental set.

Spending their entire lives together, the Nicholls twins work seamlessly on stage. The duo constantly had one another’s ear: working through live sample triggers, tempo changes and determining the best tracks to engage the audience. The young producers are still finding their own voice within club music, presently spreading a dark hip-hop sound similar to the A$AP Mob combined with the Colorado-party aesthetic that has grown with acts like Paper Diamond and Big Gigantic. A sound exemplified by the duo’s five-track EP Watch This.

Performing late into Sunday morning, Two Fresh kept the audience trapped with performances of new tracks like “12 PM” and the marijuana-anthem “Some Purple”. No doubt, this is a group that will only flow further up the EDM ranks as they set out across the festival circuit in 2013. And given their recent collaboration with the electro-funk outfit Cherub, titled Unplanned Parenthood, the brothers prove they can produce tunes across the sonic spectrum. Here’s hoping Two Fresh can link up with an up-and-coming emcee within the haze of So.Cal or Colorado, slightly hone their intensity and build on the respect they have already cultivated across the talent at 1320 Records and the Elm And Oak collective.