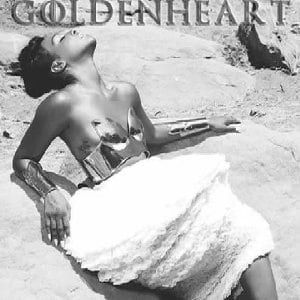 [xrr rating=3.0/5]As a contestant on the third season of “Making the Band,” Dawn Richard caught the attention of Sean “Diddy” Combs and became a member of R&B girl group Danity Kane. Like most made-on-TV groups, Danity Kane released two albums and a few singles before disbanding in 2009. Richard, however, continued working for Diddy’s Bad Boy Records while recording a mixtape and an EP. Meanwhile, she developed her ambitious solo breakout, a series of three albums called Goldenheart, Blackheart and Redemptionheart.

Richard describes Goldenheart as the setup to the breakdown coming on Blackheart. She gives us love and turmoil, war and hope, set to lush dance beats and piled with harmonies. She establishes herself as a queen, an assertion that’s usually much less plausible than Richard makes it. She then chases triumph in her own electro- imbued, dance-pop style of R&B. (She even works a Bollywood chorus into “Northern Lights.”) Her voice coils around her melodies in a protective pose. In turn, the melodies wend throughout songs that have been finished with a light metallic sheen. In some chrome-coated near future, “Riot” will pump from car stereos and the luminescent vocals of “Gleaux” will be endlessly remixed on dance floors.

Whether inciting riots or deadpanning, “You’ll never see the break of Dawn,” Richard is effortlessly cool. She makes even that “Break of Dawn” chorus, which sounds so cheesy on paper, into a rallying cry. The melody starts low in her range and climbs ever upward to become an empowering anthem. “Ode to You” toys with contrast, the snare clattering under layered vocals. “In Your Eyes” repeats the Peter Gabriel sample hinted at in the album’s introduction. At 16 tracks, the record runs the risk of dragging on, but Richard subdivides it into two movements: one half radio-ready hits, driving beats, fist-pumping warrior anthems like “Riot” and “Return of a Queen”; the other half laid-back and introspective, “Ode to You” and “In Your Eyes.” The dance tracks push, ballads pull, and in “Tug of War” she juxtaposes a heavy beat with lyrics that hurry and slow at whim.

Just days before Richard began her ambitious campaign, the biggest superstar to emerge from a ‘90s boy band released a new single and announced an upcoming album. Justin Timberlake set the standard for newly singular artists and his are certainly not bad footsteps to follow. Beyonce, of course, has belted her way from Destiny’s Child to the Presidential Inauguration and the Superbowl. With positive role models fresh in fans’ minds, Dawn Richard steps forward with the confidence and vision to point her career in the direction she wants to go.