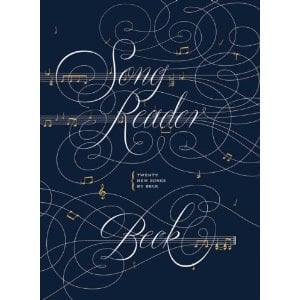 [xrr rating=5.0/5]When it was announced last summer that Beck’s new album would not be a recording at all but rather a collection of sheet music, industry wag Bob Lefsetz called it “a publicity stunt,” flatly stating that Beck was “unable to sell an album, people [are] no longer interested in what he has to say musically.” According to Lefsetz, Beck was merely attempting some sort of “end run around the music business” in order to cash in on his fading notoriety. As disappointed as I have been with Beck’s last few records, I was inclined to agree with this grim assessment at the time. But now that I have Song Reader in my hands and played through the 20 songs in the collection, I’ve come to a different conclusion. “Publicity stunt” or not, it is an undeniably exquisite object d’art. Moreover, it contains Beck’s most sincere and heartfelt music since 2002’s Sea Change. But the only way to hear these songs is to play them yourself—or have someone play them for you. Either way requires an active engagement with the material that stands in sharp contrast to the usual passive consumption of music. You have to make an effort—and that is what makes Song Reader so rewarding.

The idea for Song Reader actually had its germination back in the mid-‘90s, when Beck was sent an album of sheet music his publisher derived from one of his records. In his preface, Beck relates how “seeing the record’s sonic ideas distilled down to notation made it obvious that most of the songs weren’t intended to work that way.” Anyone who has seen these sorts of things at musical instrument stores knows exactly what he means: reduced to simple (if not simplistic) piano/guitar transcriptions, the song you heard on the radio is nearly unrecognizable, requiring considerable resources to turn this sketch into something approaching the sounds you heard on the record. Even such ambitious projects as The Beatles Complete Scores, which attempted to map out every event on their iconic recordings, are riddled with errors and inevitably fail to transcribe the feel of the songs, arguably the most important aspect of a hit record. It occurred to Beck that “reversing the process” would be better, making “an album that could only be heard by playing the songs.”

Not so long ago, that was how everyone heard popular music, and cheap sheet music sold millions of copies. Before the advent of radio and sound recordings, people made music themselves in their own homes and communities, with every middle class living room having a piano (if not guitars, fiddles and other instruments) available to friends and family. Musical literacy (at least at a rudimentary level) was fairly common and a burgeoning music industry grew up to fill an insatiable need for songsheets. Beck points out how “Sweet Lelilani,” a song popularized by Bing Crosby, sold some 54 million copies, an astounding figure for a song which is now nearly forgotten. At the turn of the 20th century, sheet music was hugely big business and the bitter battles over bootlegged and pirated editions precipitated the showdowns over illegal downloading we see today.

Such a world is almost impossible to imagine now, with music education nearly eliminated from public schools and discarded pianos hauled off to the dump by the truckload every day. There is, then, an unavoidable air of nostalgia about Song Reader and Beck acknowledges the danger of a “quaint, retro irrelevancy.” His numerous collaborators at McSweeney’s have certainly made every effort to recreate the look and feel of old sheet music, from the heavyweight paper stock to the stylized typography to the handsome, sturdy portfolio which holds it all together. Over a dozen artists contributed to the project, including Marcel Dzama, Josh Cochran, Leanne Sharpton and Jessica Hische and the covers cleverly evoke the garish, hard-sell graphics of the early 1900s, right down to the hilariously over-the-top ads for other, fictitious songs (also penned by Beck under a variety of pseudonyms). Beyond recreating the trappings of a bygone era, Beck’s ultimate goal was to write “actual, playable songs” with “a quality that allows others to inhabit them, and to make them their own.” In my estimation, he succeeded. Although fewer and fewer people have the requisite training and instrumental skills to decipher the notation on these pages, those who can will be rewarded with a collection of songs worth singing, no matter who you are.

Drawing from the American Songbook and its amalgamation of indigenous styles like folk, blues, gospel, country, jazz and show tunes, Beck has written these songs in a broad, populist vein and arranged them in easy, guitar-friendly key signatures. Yet his typically surrealistic wordplay is still much in evidence, as on the bluesy “Rough On Rats,” containing chewy mouthfuls of lyrics like, “Your crawfish fingers and your dirty dregs/ Your sideways stingers and your wooden legs/ They’re throwing out jewels like rotten eggs/ Cos it’s Christmas in Siam.” Or “We All Wear Cloaks,” a lurching march in 7/4 time with unspooling lines of juicy non-sequiturs: “Salamander rolling zig-zag/ Marching to a hum drum/ Between the truth and a cryptogram/ Like skeletons struck dumb,” etc. The songwriting is surprisingly strong, whatever the genre: “Saint Dude” is a straight-up rock anthem while “America, Here’s My Boy” turns World War I propaganda into a gut-wrenching anti-war song. The most blatantly old-fashioned song in the collection, “Old Shanghai,” also includes a four-part horn arrangement in the style of Tin Pan Alley. Additionally, there are a couple of solo piano instrumentals: “Mutilation Rag,” with a tempo marking of Bizarremente, pits the left hand against the right in battle for the keyboard, with a witty, unspoken commentary running throughout like Erik Satie’s “Descriptions Automatiques” or “Embryons Desséchés.” Then there’s “The Last Polka,” a wordless lament for the end of the world, reminiscent of Aaron Copland’s classical Americana. But the slow, sentimental ballads really stand out: “Don’t Act Like Your Heart Isn’t Hard,” “Eyes that Say I Love You,” “Please Leave a Light On When You Go,” “Sorry,” “Why Did You Make Me Care,” “Heaven’s Ladder,” and “Last Night You Were a Dream” are all sweetly melodious, meticulously constructed and emotionally riven. Even the “fake” song, “Why?” is remarkably touching and sophisticated, with its soaring melody and lushly impressionistic chord sequence. These songs are easily Beck’s most moving and heartrending since Sea Change—but you won’t hear him singing them.

Do you need to read music in order to appreciate Song Reader? No. The dazzling artwork, phony advertisements, Beck’s erudite and illuminating preface as well as Jody Rosen’s introductory essay makes this worth perusing regardless. As usual with everything McSweeney’s publishes, Song Reader is an extraordinarily beautiful physical object, produced with a loving attention to detail unheard of in this day and age. And, if you really want to hear these songs, you can find a plethora of performances online: more than 30 thousand renditions of these songs have already been uploaded to the Song Reader website and YouTube since the book came out in December. As submitted by rank amateurs, hobbyists and some well-known indie-rock stars, the interpretations range from straightforward readings to radically reworked. McSweeney’s has provided a helpful chart to decode the various symbols found in the sheet music so you can follow along, even if the dots on the stave are inscrutable.

In support of his attack on Song Reader, Bob Lefsetz pointed to an article in Forbes proclaiming it a “genius innovation that appeals to the user-generated generation.” In other words, Beck is to be admired only for his marketing savvy, his brilliant strategy for “aging rock stars” to sell expensive products to a young demographic. Admittedly, the idea that sheet music is somehow “innovative” seems absurd. But those 30-plus-thousand performances point to a latent market of amateur and professional musicians that is perhaps being underserved. Maybe struggling but talented songwriters can once again sell their songs directly to musicians now that income from recordings is rapidly diminishing. If Song Reader is a “publicity stunt,” then it is a very successful one—after all, here I am providing more press. But this is about more than just marketing: none of it would matter if the songs weren’t any good. They self-evidently are. And lacking a fixed, definitive version, they are open to any interpretation—even yours.