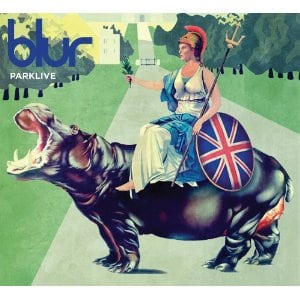 [xrr rating=4.0/5]For anyone that is too short on cash to visit Indio in April to watch Blur perform in front of the Coachella masses, Parklive is the perfect set of discs to help quell any anxieties. On the other hand, if you so happen to have secured a ticket to the festival, the live recording is worthy of setting on repeat until Damon Albarn and co. take the stage April 12th. Spanning 25 songs, excluding a third bonus disc, and recorded during Blur’s companion concert to the 2012 Summer Olympics closing ceremony, Parklive captures the reunited outfit at the height of cultural significance.

This concert wasn’t just another show, it was a way for Blur to celebrate London, the U.K., the area’s heritage and their own history as figureheads in the 1990’s Britpop explosion. Judging by the roar of the crowd as Albarn took the stage August 12, 2012, this is a moment that many proud Londoners had been fervently awaiting. Almost rhetorically, Albarn waited for the thunderous applause to calm then simply exclaimed, “Are you ready?” before breaking into Parklife’s “Girls & Boys”. Albarn could have easily just stood silent and held the mic toward the Hyde Park audience, as the boisterous crowd was amped to sing through the entire track. Often flat — Albarn wasn’t born the most gifted of singers — the 50,000 back-up vocalists at Blur’s disposal delivered the Brit-pop anthems of “London Loves,” “Tracy Jacks” and “Jubilee” with a hysteria that had been bubbling since their collective youths.

An undoubted cause for celebration, the concert also offered moments of introspection for Albarn, guitarist Graham Coxon, bassist Alex James and drummer Dave Rowntree. Prior to jamming through the “really old B-side” entitled “Young and Lovely”, Albarn reminisced about writing the song before the collective had any children and how the power of the song has evolved now that the men have their own offspring growing into teenagers. The gentleman also used the stage as a political podium, dedicating “Out of Time” to all the athletes that were not able to compete during the Olympic Games due to injustices committed by their countries that led to an event sanctions. It is this openness and sincerity that has led to an ongoing love and appreciation for band.

Politics and Olympics aside, the foursome prove throughout the latter portions of the disc that they still maintain a lo-fi rock energy. Graham keeps his guitar squealing, and James and Rowntree keep the tempo just a few beats quick on the transition from “Popscene” to “Advert” and the U.S.-favorite “Song 2”. Backed by an orchestra, even Blur’s lo-fi output was performed at a scale fitting of an Olympic ceremony.

Beginning with the newish single “Under the Westway/Intermission,” the set’s final songs were delivered like a massive fireside sing-along. Closing with “End of a Century,” “For Tomorrow” and “The Universal” was, and is, a statement about the longevity of both the band and the country as a whole. Eras will come and go, but the U.K. and its residents’ national pride will never subside. Welcoming this notion of change, Albarn fittingly modified an “End of a Century” verse from “as you get closer to thirty” to “as you get closer to fifty.”

Like the Super Bowl halftime show, the closing moments of the London Olympics were a time for pomp and circumstance. Equally as entertaining, the intimacy on Parklive between Blur and the Hyde Park crowd goes well beyond that of America’s many massive televised concerts. Like the best live albums, this release transports the listener to both a time and place. In the year 2037, Londoners will be able to listen to this album, close their eyes and relive the experience like 25 years haven’t passed by.