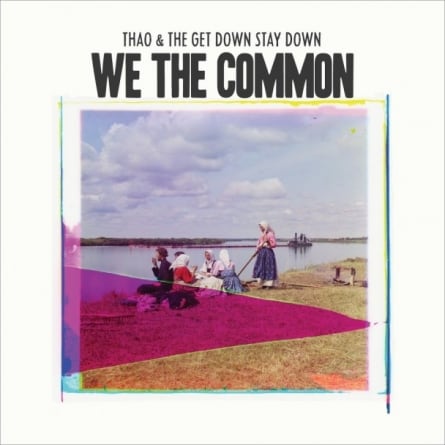 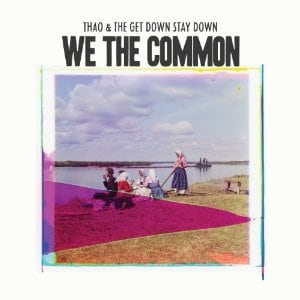 Some songwriters caution against spending much time working on songs while on tour, because, as I heard one band member opine in an interview long ago, before you know it you have Running on Empty, Jackson Browne’s album so preoccupied with the traveling musician’s life that it even has a song about the heroism of the noble roadie. For Thao Nguyen’s latest album with her band the Get Down Stay Down, she worked on it while enjoying a rare escape from that vagabond life, largely composing the songs during the roughly yearlong stretch when she finally got off the road. The resulting album, We the Common, funnily winds up with a fair amount of sentiment that can reasonably be connected to her time looking out at the road rushing under her wheels, as on the slinking shuffle of “We Don’t Call” (“Well, bye bye, baby, I’m going to work/ Chase myself all over the earth”), which is the first indication that the atypical downtime hasn’t invited drastic reinvention so much as an evolution into deliriously pointed autobiography.

Nguyen has always had a fascinatingly offbeat way with a pop song, but there was something just a touch distancing about the abstractions she built into them. The words were designed to give her something to wrap her rich, emotive voice around, paradoxically combining a deadpan smolder with slyly elastic phrasing. She’s still hardly into moon-rhymes-with-June territory on We the Common, but it feels easier to trace the ideas back to the person voicing them. This added directness is no doubt inspired in part by the work Nguyen has done lately with the California Coalition for Women Prisoners from her current home base of San Francisco. No mere musical figurehead for the organization, Nguyen has put in her time with the organization that, as they put it, challenges the institutional violence imposed on women, transgender people and communities of color by the prison industrial complex, and that time ricochets through the record, beginning with the lead track and title cut. Parenthetically titled “(For Valerie Bolden),” the song is inspired by a woman Nguyen met visiting one of those prisons, lending the lyric, “All they wanted was a villain, a villain/ And all they had was me” an added poignancy.

Produced by John Congleton, who previous shepherded exceptional releases such as St. Vincent’s Actor and Strange Mercy, the album has a fulsomeness of spirit that suits Nguyen’s approach. As she explained to Interview, she sees We the Common as “a record about the collective energy and harvesting it, about how people can pick up from each other.” The rejection of solitude that represents is reflected in the arrangements of the songs. They are brimming with elements, pinging of tidy little surprises at every sonic turn, somewhat in the manner of tUnE-YaRdS (an occasional collaborator of Nguyen’s) but without the aggressive airbrushing of oddity. “City,” as one example, has a lot going on it, including a rat-a-tat rhythm track that sound a little like Peter Gabriel’s “Game Without Frontiers” updated for modern warfare. It never feels overly busy, though, defined as much by its relative leanness as its delighted studio tomfoolery. Elsewhere, “Move” is like a jalopy progressing in fits and starts, struggling for a bit before lurching forward with a jolt, and “The Feeling Kind” is enlivened by the speckling of horns, as if a happily besotted New Orleans horn section wandered in and figured what the hell, might as well jam.

“Kindness Be Conceived” is the track likely to generate the most attention. A duet with contrarian chanteuse Joanna Newson, the song finds the singers overlaying their vocals together rather than swapping verses, the compare and contrast becoming irresistible. Against a composition that sounds like the kind of thing Jack White cooks up when he’s scratching his honkytonk itch, they meld for than merge, creating something a little too otherworldly to be called harmony but also so in sync that it begins to feel like a single voice emanating from some indefinably magnificent being. Like other material on the album, it comes across as a previously unknown necessity, something that needed to find a home. Thao & the Get Down Stay Down have delivered fine music before, but with We the Common, the group, and Nguyen in particular, offer up a first true statement of purpose.