January 27, 2021
Home Film A Glimpse Inside the Mind of Charles Swan III 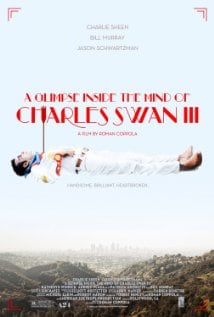 [xrr rating=1.0/5]A Glimpse Inside the Mind of Charles Swan III is the sort of film that a certain subset of warped cineastes absolutely long for: a jaw-dropping debacle that fails not because of ineptitude or laziness, but because of preposterous pretension and a landslide of misguided creativity. Anyone can make a low-concept Adam Sandler comedy or a drippy Nicholas Sparks adaptation into a bad movie. All that it takes is the barest attention to the proceedings on the other side of the camera. But real effort is required to smush together aggressive camera technique, agitated editing, European cinematic style, comically dated ‘70s fashion, a loop-de-loop narrative structure, name actors slumming in incomprehensible roles and art direction so removed from either good taste or a functional sense of humor that a posh automobile with giant, garish decals of breakfast foods seems like the height of brilliant satiric commentary.

It helps if this sort of affair comes from a director of some renown, meaning a certain degree of skill is evident, even if it’s drenched in candy-colored flop sweat. This was a little more common in the late ‘60s when Otto Preminger was making Skidoo and Robert Aldrich followed up The Dirty Dozen with the execrable Hollywood fever dream The Legend of Lylah Clare. Those wondrous disasters were released within months of one another. In the case of Charles Swan III, the man literally calling the shots is Roman Coppola, who could very well have spent his film’s opening day picking out a tuxedo for the Oscars as a nominee for co-writing Moonrise Kingdom. Besides that, his previous directorial effort, CQ (2001), was a flawed but fascinating comic psychodrama about the making of a film similar to Barbarella. If there was cause to be curious about what Coppola might do next, that intrigue has been rewarded with a marvel of pure insanity that’s paradoxically almost more satisfying as an experience than another decent film might have been, if only because a perverse sort of pride is earned for making it all the way through it.

Compounding the film’s gawk factor is the presence of Charlie Sheen in the title role, his first lead in any onscreen effort since Chuck Lorre and company decided to enable (and exploit for laughs) his legendary bad behavior across 175 episodes of the putrid “Two and a Half Men.” Their lucrative pain was discerning moviegoers’ collective relief. On evidence of his performance as a narcissistic, womanizing, self-destructive cad, he is as wholly disinterested in being engaged in his work as ever, and the role as Swan is hardly a stretch. I sometimes feel Robert Downey, Jr. is overpraised for his comeback from addiction and associated hedonistic embarrassments, but at least he emerged from his darkest years chastened enough to rededicate himself to his craft. Sheen shows every sign that he’s still the guy who boasted of his professionalism because he knew to lean on the prop furniture when he was hungover on set. It’s maybe no surprise that Coppola would be interested in helping Sheen orchestrate an attempted comeback – the two have known each other since they were tweens and Roman’s dad almost killed Charlie’s dad during the making of Apocalypse Now – but surely he had some capability of recognizing that not everyone else has the same affection for his old pal, that Sheen would have to do more than simply show up to impress the audience.

Much as I’d like to give Coppola credit for having some amount of sound judgment, the film is packed with indicators otherwise. That’s led by the equally dispiriting work by the other performers, especially those whom Coppola could have recruited from a particularly wide-ranging family reunion. Former in-law Patricia Arquette (married to Coppola’s cousin Nicolas Cage) plays Swan’s sister Izzy, demonstrating that she is still an actress who manages to deliver nearly every line as if she’s parroting syllable that have been fed into her ear instead of speaking words that are known to her. And then there’s Coppola’s cousin Jason Schwartzman who plays entertainer Kirby Star and exhibits his trademark genial neurosis. But here, Schartzman sports a bushy ‘fro and beard as thick as a winter sweater that resembles “happy little tree” painter Bob Ross if he’d gone into leisure-suit modeling instead of art.

In the film, Kirby is awaiting Swan’s design work for his latest album cover. The scene in which he plays Swan a bit of the album is emblematic of the film’s misguided Matryoshka-doll nesting in colorful inanity. After the play button is hit on a cassette player, the film cuts to Kirby on stage delivering a painful comedy routine obviously meant to recall Lenny Bruce. Then that scenario is knocked aside in favor of a satiric realization of the routine’s premise of women as “ball-busters,” mounting a military strike against cheating men as they flirt with waitresses. None of it is funny, none of it is sharp, none of it is clever. In fact, it barely makes any sense.

Making matters worse, it becomes increasingly difficult to discern between Swan’s chauvinistic worldview and any contrary inclination offered by the filmmaker. In many ways, the film is structured as a satire, but increasingly during the film, Coppola gives the impression he isn’t so much mocking a callous fool as he is celebrating a scoundrel’s endurance, the ability of a self-regarding bastard to outlast those who turn against him. The film’s final scene offers a convincing argument for that theory, as a crane shot on a beach begins with the principal cast members stepping out of character to announce themselves in verbal closing credits. The roving camera finally comes to rest pointed at a reflective surface, Coppola and his cameraman framed admiringly in the reflection. For a film that mistakes narcissism for admirable confidence, it’s the perfect final image before cutting mercifully to black.