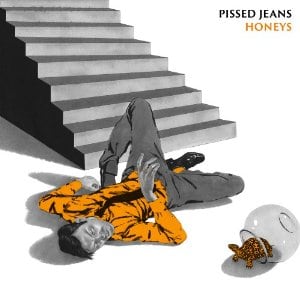 [xrr rating=3.75/5]The title Honeys is helluva misnomer for Pissed Jeans’ latest LP. If it’s nectar they’re secreting, it’s a decidedly acidic and bitter batch. On the other hand, maybe the namesake isn’t as random or deliberately contradictory as it initially seems, as throughout the 12-track record, the Pennsylvanian quartet channels the distorted buzz of swarming bees defending their hive’s prize.

Suffice to say, Honeys is tailored to give eardrums a good pummeling. Brutal and abrasive, it is the aural equivalent of having a cinderblock smashed over your head and then chomping on the fragments. With Bradley Fry’s chainsaw guitar licks and the sledgehammer drumming of Sean McGuinness, one wonders if the band used power tools to double as instruments. Throughout the pandemonium, singer (maybe “vocalist” is more apt) Matt Korvette howls like a man marooned in a different dimension, trying to tear his way back into ours.

The songs here tend to fall within one of two categories: breakneck, hardcore tears (“Vain in Costume” and “Health Plan”) or sludge-churning funereal dirges (“Male Gaze” and “Loubs”), if the funeral was held in the bowels of a condemned asylum. Opener “Bathroom Laughter” is decidedly in the former camp, a blistering attack that launches the album with a kick to the stomach. Amid the din, Korvette’s rapid fire barrage of lyrics replicates the brutality of the domestic violence they depict (“Bathroom laughter leads to kitchen crying/ Don’t make me say I told you so”). When not spitting actual words, he sounds as though he’s spewing bile into the microphone, both in the biological and literary sense of the word.

Second number “Chain Worker” shifts gears and quickly establishes the paradigm of the album, of oscillating between the two song types. The dead-slow, molten flow finds Korvette pontificating (beyond any scope of rhythm) on being trapped in the modern world, while Randy Huth’s bass tuning rumbles like a tectonic plate shift. It oozes seamlessly into the throttling “Romanticize Me,” wherein Korvette’s angry humor takes aim at the love song archetype, mocking its quaint sentiments by zeroing in on the relationship of a self-centered misogynist and a weak-willed partner. Codependency is what keeps the characters together, perhaps the connector in as many relationships as love, and that is best expressed in “You should be really thankful/ When I say, ‘C’mon, let’s do it.’”

A recurring theme of being caged by the demands or expectations of contemporary society manifests throughout the album. “Cafeteria Food,” with its toe-tapping rhythmic lurch, focuses on white collar tedium and expressing the malaise and absurdity that comes with working for decades at an unrewarding office job. Think a gritty theme song to “The Office” and you’ll have an idea of what this cut is about. The song’s meat-grinding throb is an effective device in adding gravitas to the lyrical content. Attempts to escape from the feeling of confinement, or at least to temporarily distract from its reality, are likewise met with disappointment. “You’re Different (In Person)” lampoons online dating, criticizing the net for ostensibly bringing people closer together while actually isolating them further, and “Cat House” is a lament for a drunken night and a disturbing sexual experience. Judging by the closing line of “I thought maybe things would change/ But every cat house is the same,” it’s not the narrator’s first attempt at seeking solace in such disreputable fashion, making it all the more disturbing.

The only real negative notes for the album are those innate to the noise rock subgenre as a whole. Simply put, Honeys is a difficult listen, and it’s not a record you’ll return to often. Likewise, noise itself becomes repetitive and monotonous once the initial jarring wears off. If the album wasn’t sequenced as it is, to alternate between the fast-paced and down-tempo cuts, it would be hard to tell the songs apart. That said, turn to Pissed Jeans’ Honeys on those mornings after when you need some commiseration for your hangover headache and nausea.