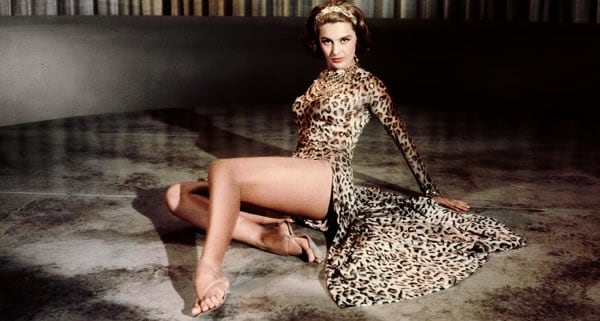 A match made in cinematic heaven, Romance and CinemaScope go together like peanut butter and jelly. Stretching the frame to a ridiculous width (nearly twice the standard Academy ratio), the vintage format helped enlarge the medium’s capacity for desire, spectacle and mystery, inflecting those qualities with a heightened air of magical immensity. This expanded platform was best suited for communicating the larger-than-life sweep of epics, as well as for elevating love stories to a similar mythical plane. Transformations like this were of little interest to an iconoclast like Nicholas Ray, who’d messed with the magical properties of Scope before, and did so again in Party Girl, crafting a love story that’s about more than just passionate abandon.

Documenting the seemingly doomed affair of a mob lawyer and an aging showgirl, Ray presents another aching tale of damaged individuals seeking shelter from the storm. In doing so, he complicates the often-frothy dynamic of the romance genre, by pushing up elements of fear, distrust and malice in the same proportions as the passion and beauty. The result is a complicated clash of towering emotions, one that subverts the flamboyant properties of the format by aiming for incisive complexity on a grand scale, rather than pure grandiosity.

This doesn’t mean that Ray doesn’t make the most of the form. Party Girl is still a marvelous visual object, as shown most intensely in its club and party scenes, particularly two dazzling showpiece dance sequences. It’s nearly as vivid in its portrayal of the wood-paneled backroom world of the gangster milieu, creating a visible tension between gaudy pastels and earth tones, a divergence that mirrors the story’s conflict between transformative love and threatening doom. Like most Ray heroes, the lovers here don’t firmly belong anywhere, neither in the proper world that beckons them to settle down or the shadow one that threatens to destroy them. 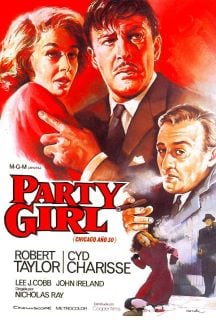 Cyd Charisse plays Vicki Gaye, a failed dancer who’s just above just-getting-by, the class of woman that’s part showgirl, part living mannequin and part prostitute. Working at a mob-run club in 1930s Chicago, she gets side pay for serving as eye and arm candy at late night parties for gangster types. It’s at one of these events that she meets Thomas Farrell (Robert Taylor), a more refined type of gentleman than she’s used to, who gently pries her from the advances of top thug Lou Canetto (John Ireland). The two get off to a rocky start, and the absence of a fairytale beginning foretells the realistic outlines of their affair; she’s damaged goods, he’s a 50-something divorcee who walks with a cane, his physical infirmity mirroring her spiritual brokenness.

Most filmmakers would push this scenario toward a Pretty Woman type of conclusion, with salvation for the troubled girl and romantic thawing for the cold man. Party Girl goes in a different direction entirely, dispensing with any hints of redemption early on, after Vicki fittingly turns the tables on Farrell, showing him that’s she’s not interested in his patronizing pity. Watching his shysterish antics in court, she turns the tables, incisively pointing out that the disingenuous show he puts on in defending obviously guilty mob flunkies is no more moral than her self-exploitation of her body. This equalization of gender roles, and the lack of value judgment for a female character with a strongly suggested history of sex work, is a strikingly daring stance, identifying the film’s clear remove from fantasy in its pragmatic conception of relationships.

So while both characters inevitably need to save each other, this conflict isn’t dependent on the usual gender clichés; it’s a pointed issue that Vicki never leaves her job, despite the danger and degradation inherent to it, refusing to abandon her ambition and become a kept woman. Farrell’s work eventually becomes the main issue, with his former gangster cohorts continuing to hound him even after he attempts to go straight, understandable considering how much sensitive information he has on them. Here the Scope frame gets exploited in service of horror, in an amazingly acidic set piece detailing a series of tommy gun murders. The fear here is real, especially since Ray’s stories usually skew toward tragedy. The makeshift families he forms, from the young drifter couple in They Live by Night all the way up to Jesus and his disciples in King of Kings, aren’t meant to last. The aggregate power of this genuine tension and the towering visual emotiveness of Ray’s camera, applied to two deeply developed characters, turns the resulting climactic showdown into something truly special, a thrilling testament to the titanic capacity of the silver screen.