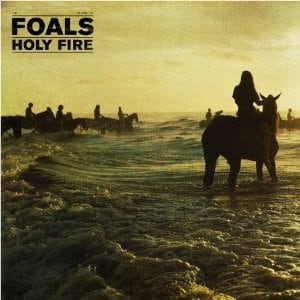 [xrr rating=3.25/5]Born out of the mid-2000s’ renewed interest in math rock (and with a roster populated by three former members of notable disbanded math rock group the Edmund Fitzgerald), Foals has kept to the fringe of that subgenre. Their sterling 2008 debut, Antidotes, was more accessible than music by contemporaries such as Battles, in large part due to lead singer Yannis Philippakis’ thickly British-accented vocals. The complex staccato guitar licks, rapid fire drums and chugging bass on tracks like “Cassius” helped pigeonhole Foals neatly into the math rock niche, but even on that debut it was evident that they were striving for much more.

With that in mind, their third album, Holy Fire, is more indicative of revolution than natural evolution. With Holy Fire, the Oxford-based quintet have quit the math club and tried out for starting quarterback of the varsity football team. Filling stadiums is part of the new equation. Lead single “Inhaler” makes their dramatic transformation abundantly clear. As Philippakis’ voice – notably sapped of British accent – soars in that track’s chorus, he channels Perry Farrell at his most shrill, and the brawny guitar fuzz hook mimics Rage Against the Machine. There are even some overtones of Franz Ferdinand’s slippery bass bounce as Foals lays down the party-boy jock lyrics, “I shimmy-shake, I wake and bake.”

In an effort to dance with the one who brought them, next track “My Number” opens with the higher pitched guitar plucking that was their signature sound on Antidotes. Yet Philippakis’ voice is camouflaged by those of his backup singers, and this mirrors the lost-down-a-well vocals that saturated sophomore release Total Life Forever. Philippakis’ voice rises to the fore on “Bad Habit,” but sprawls out into Bono or Chris Martin territory during the song’s wistful reach-for-the-stars chorus. The emotional scope of the song will likely draw in new listeners (particularly those already into Band of Horses), while those who swore by Antidotes-era Foals may wonder how Coldplay managed to hijack their band.

By the same token, “Late Night” starts off slow and mournful (Philippakis sings, “Oh now Mama, do you hear me?/ I’m calling out your name”) and builds to an emotive swell that resonates in mood even if the lyrics about “empty veins and my plastic broken crown” or the lamentation “I threw my heart away” leave something to be desired. But there’s some crunchy guitar near the outro and a bass throb throughout that keeps the song instrumentally interesting. “Late Night” marks the flagging of intensity that squelches Holy Fire’s second half. “Out of the Woods” incorporates some crystalline guitar and nifty jungle percussion interludes, but never rises above average, while “Milk & Black Spiders” is aptly name (the blend of keys and guitar bears both a full-bodied liquidity and a creepy-crawly plinking) but relegates Philippakis’ voice back to distant echoes.

Late gem “Providence” renews the album’s initial forward thrust with grimy guitar riffs and churning drums, and the repetition of lyrics (which include “I’m an animal, just like you”) imbue the track with some primal immediacy. But it’s the album’s last hurrah. The two closing tracks, “Stepson” and “Moon,” are sleepy affairs that aren’t likely to make many playlists.

The sheen that shimmers throughout Holy Fire can be credited to British producers Flood and Alan Moulder who have significant history with mainstreaming once obscure acts such as Sigur Rós, the Smashing Pumpkins, Nine Inch Nails and the Killers. With Foals now in their stable, the producing duo has done it again. Holy Fire may very well mark the emergence of Foals as a major headliner, but there’s also the sneaking suspicion that these geeks-turned-prom kings may forget the math clubbers who used to save them a spot at the lunch table before their popularity-inducing makeover.