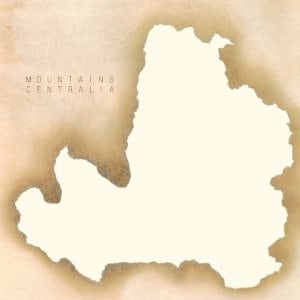 [xrr rating=3.0/5]When you name your band Mountains, you preemptively invite dozens of think pieces about your naturalistic influences, lofty ambitions, rugged melodies and other such terrestrial comparisons, no matter how celestial your ambient, droning rock music. But Mountains’ music does not resemble jagged peaks seen from afar; it’s closer to the feeling of cresting their namesake and seeing land and sky in totality, a wholeness in the universe as viewed by a misplaced but ambitious traveler.

Band members Brendon Anderegg and Koen Holtkamp have changed their methods for each release. They began with self-released one-off home recordings of their ambient electronica, but by the recent release of Centralia they have become deliberate composers of drone, layering each sound methodically and particularly, sometimes spending weeks on tracks. The result is an album of pensive hums and weary groans that tell traveling stories across the tightly linked songs. Each one is bigger than the last, more philosophical in its stillness.

Opening track “Sand” seems to start in the evening, digital crickets blipping gently beneath a meandering melody that becomes increasingly otherworldly as the chirping turns to a bionic whirring and then eventually slows into an ominous drone featuring a mournful upright bass. “Identical Ship” rotates around an arpeggiated guitar line, swelling and abating, occasionally twinkling like a midnight drive between towns. It flows nearly seamlessly into “Circular C”, a synthesizer picking up the same arpeggio and the slow drone fading into a piano. These transitions are smooth, each layer melting away to reveal the next, an Everlasting Gobstopper of sounds and textures.

Preceded by nearly a minute of crashing waves, the album’s center is the 20-minute “Propeller.” The track synthesizes the diverse elements of the other songs, the tones of their drones, the string basses, the arpeggios. At one point, the band even cheekily overlays zinging lasers atop everything else. The chop underlying every layer could be a plane taking you over the rainforest or the fan of a boat pressing you deeper into the Amazon. The track becomes palpably denser as grinding and whirring sounds are piled on. As the song comes to a close, the titular propeller is heard fading into the distance, leaving us in the digitized realm of “Liana.” Closer “Living Lens” is sober as chiming church bells that echo through an empty town.

Ultimately, what’s most remarkable about Centralia is its makers’ ability to evoke feelings of place in such a minimalist way. Only three or four noises in 10 minutes feels serene, even meditative. Yet when Mountains balances these acoustic and digital instruments, they carry the listener outdoors and your mind expands to fill an ever-widening universe. The drone that makes up the backbone on every moment of this record is not lifeless; when you put your ear to its chest, it breathes.
[soundcloud url=”http://api.soundcloud.com/tracks/60589884″ params=”” width=” 100%” height=”166″ iframe=”true” /]