September 27, 2020
Home Books It Chooses You: by Miranda July 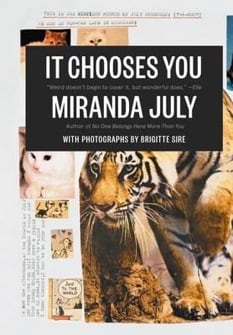 [xrr rating=4.0/5]It says something about Miranda July’s prodigious output that even her experiences in procrastination yield a concrete project. Between the breakout success of her film Me and You and Everyone We Know and its follow up, The Future, six years passed. During that time, she produced several short films, a number of books, a slew of publications in the likes of The New Yorker and The Paris Review and at least one ongoing multimedia piece. But to read It Chooses You, her book describing the process by which she made The Future and the accompanying dithering that delayed it, you’d think she was sitting at home for all six years, Googling her own name.

In fact, she mentions the amount of time she spent doing that very thing as an actual example of how she tried to avoid completing the screenplay for The Future. But the real hook of It Chooses You is her experiences with the Pennysaver, a widespread publication offering brief, free classified ads. While trying to put together the ideas she wanted for her film (including a failing relationship, time manipulation and a dying cat named Paw-Paw), July became fascinated by the For Sale section of the classified. She began a project visiting and interviewing those who would let her, trying to draw clarity for her own work through the strange people selling, among other things, an old leather jacket, leopard cubs and the fronts of old Christmas cards.

And when it focuses on the 13 individuals that she visited, It Chooses You is truly fascinating. July alternates between her first-person descriptions of their interactions, direct quotations of their conversations and photographs by Brigitte Sire. In particular, Sire’s photo work helps focus July’s sometimes meandering descriptions, building a mental idea of these people through candid shots of them and the items they have for sale. But with subjects like Domingo, who lives with his sister Matilda (the one actually selling an item, in her case Care Bears) and is a gentle young man who collects pictures of beautiful women and fantasizes about being a police officer, it doesn’t take much. Domingo could come off as intensely creepy or naive, but under July’s eye he comes across as simply human.

July’s undoubted gifts for sketching out an individual in brief observations resonate brilliantly in It Chooses You. From the ominous sense of danger that occurs simply by being in the presence of Ron, who is just vague enough about his profession and the fact that he has to wear a monitor anklet, to Pauline, a lonely Glendale woman, the 13 draw you in. It’s not difficult to see why July found it so irresistible to continue her interviews. Of course, it does bring up the question, are these people really so intriguing, or is it the author’s phrasing of them that captivates a reader?

The truth is probably somewhere in between. It seems unlikely that each of the 13 she visited would be so uniformly compelling without July’s framing device of the creation of The Future. But the sections of the book in which she actually talks about the film, up to and including financing options, are by far the least interesting. It becomes a different book in patches, more navel-gazing and focused on July’s internal debates on her recent marriage and the idea of having children. Occasionally, it even seems more like the blog of a particularly articulate, neurotic newlywed. But the frequent sections in which July manages to relate to these disparate people and draw themes from their lives into the final concrete filming of The Future are what makes the book. When it reaches those moments of true humanity, It Chooses You is simply amazing.