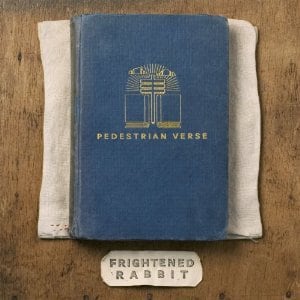 [xrr rating=4.0/5]Never one for pulling punches, Scott Hutchison starts his latest record by declaring douchebag. More precisely he says, “I am the dickhead in the kitchen/ Giving wine to your best girl’s glass,” as he assumes a character who martyrs himself (in song at least) for all men’s sins. It’s a bracing but not out-of-character opening for the Scot, who’s made a career of turning doubt, anger and heartbreak into lacerating, but ultimately uplifting anthems with his band, Frightened Rabbit. The band had their breakout hit in 2008 with one of the all-time great documents of post-romantic exile, The Midnight Organ Fight. As its title hints at, that record was populated by wrenchingly confessional songs built around Hutchinson’s acoustic guitar augmented with organ. The Winter of Mixed Drinks followed in 2010 which took the same guitar-plus-basic-instrumentation formula and basically made everything sound bigger and, as a result, less intimate. On Pedestrian Verse, Hutchison tries to split the difference and ends up with a record full of big, complex songs that, while eschewing total personal revelation, still pack an emotional wallop.

It’s obvious from the first song that this is the band’s most collaborative record yet, with Hutchison inviting his brother and drummer Grant as well as other members Billy Kennedy, Andy Monaghan Gordon Skene to have a larger hand in the songwriting process. The result is that their first album on a major label sounds big enough to fill stadiums but not so polished as to detract from the band’s ragged charm. What’s notable is how few of the songs are structured around or primarily carried by the guitar. “Dead Now” hops along with sprightly bass and programmed drums while the band does their best National impression on the organ and drum-heavy “Backyard Skulls.” Speaking of the whole band, never have they asserted themselves as powerfully as they do on “Acts of Man” which slathers instrument upon instrument to create a towering sonic structure that threatens to collapse into overblown melodrama but never quite does. Even the rockers like “Holy” and “The Woodpile” seem to owe more of their dynamism to the rhythm section than to the guitars.

Frightened Rabbit records are best heard in wintertime, with your collar up and your immune system on high alert. The emotional introspection and self-rebuke needed to appreciate Hutchison’s songs breeds most freely in short, colorless days and long, bitter nights, a fact Pedestrian Verse is well aware of. “Backyard Skulls” evokes the image of secrets of betrayal that lie dormant with the menace and implied violence of a hibernating bear. “December’s Traditions” meanwhile uses the cold end of the year as a symbol of the end of a relationship, the meager light and warmth of that month a perfect analog to the last terminal stages of a relationship. Even “Late March, Death March” invokes Lenten sparseness of early spring as it portrays the slog towards breakup and loneliness as a literal walk towards an inevitable ending. Although Hutchison is more likely to employ second-person songwriting and perhaps the occasional unreliable narrator this time around, the music doesn’t suffer. Indeed, the pointed acuity of the songwriting here combined with his soul-piercing brogue mean that you’ll still get that lump of joyful despair in the back of your throat listening to Pedestrian Verse that you did on The Midnight Organ Fight.

After a barrage of bracing, emotionally draining songs, the album ends with its most hopeful (and perhaps its finest) moment, “The Oil Slick.” Hutchison gracefully nods towards earlier, more desperate songs such as “Swim Until You Can’t See Land” and “Floating In the Forth” where the ocean was a frigid, menacing metaphor, his disappearance into it signifying a loss of hope. His springy guitarwork bobs merrily in the background as Hutchison sings about taking to the ocean (“in a boat this time”) and compares those old words to an oil slick to be traversed. Although he’s still excoriating himself and describing his writing as “shit,” a sense of hopefulness prevails. Hutchison talks about love songs floating away from him, but he doesn’t give up chasing them. On Pedestrian Verse, we find Hutchison once again sailing through the dark, viscous mess that makes up his songs, turning what should be disaster into unlikely triumph.