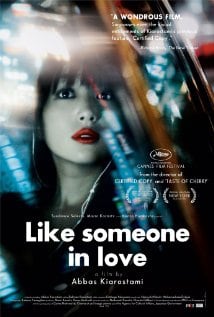 [xrr rating=4.75/5]Abbas Kiarostami’s latest venture outside Iran, the Tokyo-set Like Someone in Love, begins with such a dense interplay of sight and sound that, despite the spare cuts and reserved tone of each shot, Eisenstein might have been proud. A deep-focus shot shows a sparsely occupied but cramped café from a constrictive angle, and a woman’s voice cuts in through the ambient noise. Does the voice belong to one of the extras on-screen whose mouths are obscured or facing the other direction? Is it a voiceover? A reverse shot answers this question several minutes later, highlighting the discrepancy between Kiarostami’s use of image and sound. Later in this same scene, the director slyly reverses the dynamic, “showing” the audience sound via headphones that also restrict us from hearing what is being said. The net effect of these minor touches is one of discomfort, the feel of a massive city that can show so much to the eye and leave so much outside one’s grasp.

And that leaves out the complicated reversals of the dialogue, which establishes the aforementioned woman, Akiko (Rin Takanashi), before instantly upending what her dialogue tells the audience about her. Akiko’s insistence that she is not lying to the person on the other end of the phone leads to revelations of her deceit when she hangs up–the viewer is privy to her lies by simply being present. Likewise, a conversation she subsequently has with an old man who argues with her about completing an assignment creates a sense of mystery until it becomes clear this young woman is a prostitute using the money she makes to pay for her schooling. Dispatched to tend to an elderly professor, Takashi (Tadashi Okuno), Akiko soon finds herself in a strange entanglement with the old man that only gets more complicated when he later poses as her grandfather to calm her jealous boyfriend, Noriaki (Ryo Kase).

The whole of Tokyo as filtered through three people. That’s a lot of condensing, and the people of Like Someone in Love strain from the overwhelming density of this compressed metropolis. The contradiction of proximity and separation running through Kiarostami’s work–especially as it concerns technology’s effect of bringing people closer while keeping them apart–has never felt so decisively lonely. The mise-en-scène of the film is downright oppressive. The sunlight that used to roll over the windshield in Iran is now a slick bleed of neon lights from a flood of LED screens. Objects crowd the frame until it seems as if the few humans that appear in it might fall out; conversely, when someone appears in an uncluttered frame, they are rigidly bound by a secondary frame, be it a narrow opening in curtains or brick walls flanking some stairs. Sound too becomes part of the composition: a wall of street noise, a worn fan-belt and, in the unexpectedly harrowing climax, the paranoid beep of a kitchen timer that acts as a kind of thriller cue for yet more shocking sounds creeping from out of frame.

Into this rich tapestry of isolation, Kiarostami adds delicate details that constantly reshape the characters. Recurring mentions of an old call-girl advertisement to Akiko by other characters stress how the photo only looks like her, the truth obscured by the delusion of Akiko’s loved ones, and her own deceptive omissions of truth. When Takashi so quickly assumes the mantle of Akiko’s grandfather, his act does not seem so far-fetched, given his paternal tone during the previous evening’s visit. A conversation between himself and Noriaki then undermines their respective ages: Noriaki asks Akiko’s “grandfather” for her hand in marriage and claims he wants to get married so his girlfriend will obey him. A bemused Takashi encourages the boy to give up his outdated view of marriage and enjoy a more modern relationship with the girl.

These reversals and changes in perspective follow from a conversation Akiko has with Takashi about a painting that hangs in the professor’s living room. She recalls having her own copy of the painting, a portrait of a girl her family said looked like her. The portrait depicts the girl teaching a parrot how to speak, but Akiko says he saw it as the parrot teaching the girl. That misunderstanding and subjective interpretation feeds the film’s relay-like identification, where Akiko may take to Takashi as a grandfather to make up for her neglect of her actual grandmother; where Akiko’s resemblance to his late wife may explain Takashi caring for the girl; where even a side character like the professor’s spinster neighbor may view her ongoing care for a disabled brother as a proxy. The humanism that grounds Kiarostami’s intellectual, form-testing cinema falls away to reveal a system of human signs and signifiers, used as emotional outlets in lieu of those to whom they want to show these emotions directly. Kiarostami’s most abstract, metaphysically challenging work, Through the Olive Trees, proved that the more the camera moved outward, the more it showed only the limitations of the frame. Like Someone in Love suggests that getting closer to the subject does not hold many more answers, either.