March 05, 2021
Home Music Revisit: The Get Up Kids: Something to Write Home About 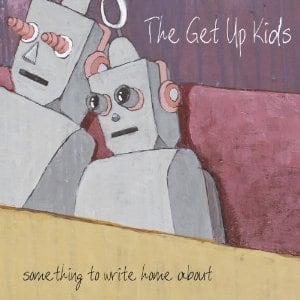 We all had our moment with the Get Up Kids at the turn of the century. Whether brokenhearted, disappointed, yearning or wiling away our youths in sterile suburbs, we heard an incisive lyric, a particularly strained melody and felt that these Midwestern boys got the ennui, the powerlessness of youth. They felt hurt, angry and apologetic in turn, and they put that to loud guitars and big drums. And we responded to their complicated growing pains the only way we could—by making their adolescent second album successful.

Their first record, Four Minute Mile, was loud and moving, but staunchly unpolished. Matt Pryor’s vocals were raw and his melodies had a tenuous, meandering relationship with the rhythm section. Everything was loud, so it was hard to hear much of anything. By the time they released Something to Write Home About in 1999, Pryor had developed some control over his plaintive voice as he sorted through messy feelings for exes, parents and record labels. Pryor played reluctant to leave on “I’m a Loner Dottie, a Rebel” (“Let go because I’m afraid to try”) and doting on “I’ll Catch You” (just wait until he screams, “You’re still all that matters to me!”).

The latter hinted heavily at Pryor’s acoustic interests, to be played out more fully on later albums and in the New Amsterdams. In fact, guitarist Jim Suptic gave the most punk vocal performance of the album, snarling, “How can you tell me that everything will work out?” on “Ten Minutes.” Meanwhile his guitar screamed and punched the air, still distorted, but lifted from the muck of a muddled mix. Tighter melodies fit more closely to Rob and Ryan Pope’s rhythms. The latter Pope joined as the band’s drummer for this album, as did James Dewees on keyboards. Dewees’ addition was most notably not punk, no matter how beautifully he supplemented Suptic’s simple rhythms or softened the edge on ballads like “Out of Reach” and “I’ll Catch You.” Of course, the added instrumentation and clean production that make the album infinitely more listenable gave punk hardliners a reason to dismiss the band despite critical and commercial success.

In many ways though, Something to Write Home About became the Get Up Kids’ albatross, their most successful album that carried their momentum from Four Minute Mile into a more finely produced rock album. At their peak, they and their peers were injecting raw tales of rejection and inadequacy into a genre that had been angry and detached for most of its lifetime. It seemed like a step towards emotional maturity, but the genre name “emo” (as in “emotional punk”) quickly developed derisive connotations. Many of their peers found that as they progressed as artists, they struggled to retain a fickle fan base. (Never forget that no matter how much you love its Nice Guy exhortations, Pinkerton was a major commercial flop in 1996.)

And when the Get Up Kids went acoustic and understated on their third album, On a Wire, hyperdramatic peers like Dashboard Confessional eclipsed them. Not even a formidable return to electric guitars on 2004’s Guilt Show could revive their earlier momentum. The Get Up Kids spent too many years apologizing for their contribution to the punk canon, just as Rivers Cuomo disavowed Pinkerton and refused to play its highlights . These were bands comprised of sensitive dudes who struggled after the peak of their subgenre. They briefly captured our imaginations and spoke to our uncertain relationships. But that nostalgia for being young, passionate and uncertain is too fickle a feeling to recapture with a reunion tour.