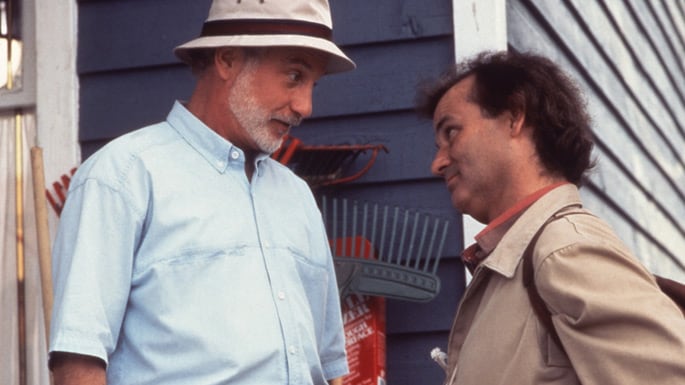 If you think about it, Bill Murray’s ascendance to wry elder statesman is pretty improbable. Over the last decade or so, Murray has perfected his persona of world weariness, of being the Droopy Dog of understated comedy. But for the vast majority of his career, he was known for basically being kind of a wiseass slob. From his years on “Saturday Night Live” to his early successes in movies like Meatballs and Stripes and then his rise to stardom with Ghostbusters, he played roles that ranged wider than you’d expect but that all shared certain elements. He was always smarter and more charismatic than he looked, able to pull off rousing speeches using nothing but lethargic sincerity. He was kind of a dick, but just charming enough to pull it off. And most specifically, if he wasn’t so funny, he’d be pretty damn annoying.

What About Bob? came at a somewhat fallow period in Murray’s career, after the creatively bankrupt but financially successful Ghostbusters II and the failure of his only directorial attempt Quick Change, but before the embarrassments that were Larger Than Life and The Man Who Knew Too Little. During that short window of time, he starred in the massive success Groundhog Day, a few off-kilter roles in films like Mad Dog and Glory and Ed Wood, and of course, his finest hour, a magnificent cameo in Space Jam. But What About Bob? is the last of Murray’s great starring comedies, one unburdened by introspection or ennui. Instead, it’s a light, almost airy glimpse into the mouth of insanity. But with a lake house.

Murray stars as the titular Bob Wiley, a man so burdened by neuroses that he punches in at the clock even though he works at home and treats a “Slippery When Wet” floor sign as a deadly danger. But despite this, he’s a rather gentle man who treats everyone around him as an equally good person; despite literally living in terror that his heart could stop or his bladder could explode, he sees the world through rose-colored glasses. Especially when it comes to his therapists. Bob’s foil and unknowing nemesis, Dr. Leo Marvin (Richard Dreyfuss) is pretty much everything Bob is not. He’s an uptight, pretentious therapist who practically exudes calm and confidence. He’s condescending and bad with his family while his career is reaching an all-time high with a national morning show interview at his vacation home on Lake Winnipesaukee. Basically, he’s kind of a dick. He’s also the closest thing that What About Bob? has to a sane person. 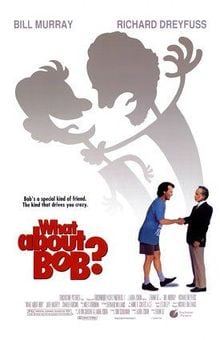 The real trick of the film is not just to make viewers empathize with an asshole, but to manage the balancing act of making everyone else seem completely reasonable while still behaving absolutely nuts. After being transferred from his former therapist (who, it’s implied, he mentally broke) to Dr. Marvin, Bob slowly and methodically inveigles himself into his life, going so far as to finagle his personal phone number from an answering service, pay a prostitute to impersonate Dr. Marvin’s sister and even fake his own death. He even makes it to Lake Winnipesaukee after a hellish bus trip to search out his therapist by literally standing in the town square and yelling his name to nowhere in particular until he shows up. Despite all this, everyone else in the movie finds Bob’s actions completely understandable. He bonds with Dr. Marvin’s kids (Charlie Korsmo and Kathryn Erbe), charms his wife (Julie Hagerty) into treating him like an old family friend and even takes over the talk show interview in a ridiculously self-assured turn of events.

But here’s the thing: at no point is Bob ever malicious or underhanded. He’s not trying to drive Dr. Marvin insane; he’s not trying to take over his life or ruin his career. He’s just an enthusiastic guy who has all the respect in the world for the therapist he’s known for less than 48 hours yet envisions as his own personal miracle worker. The single most frustrating and hilarious aspect is Bob’s oblivious nature, that he legitimately just wants to talk through his problems with Dr. Marvin. And Dr. Marvin, for his part, ultimately wants to straight-up murder Bob.

While Murray is undeniably the star of the film, Dreyfuss is a marvel of slow-burning frustration. Bob’s sweet nature becomes as intensely frustrating for viewers as it does for the good doctor, and it’s easy to crumble along with him as he goes from professional therapist laying down the law of patient-doctor relationships to irritated man on vacation to screaming misanthrope barely clinging to sanity and then a bit further. His rage at everyone else’s weird, yet strangely logical acceptance of Bob’s presence (and then preeminence) in their lives is palpable and satisfying, both a source of empathy for viewers and a ratcheting up of emotions. At the very least, seeing Dreyfuss slowly lose it over the course of 99 minutes until he literally throws himself at Bob in a murderous chokehold is a masterpiece of physical comedy.

Now don’t get me wrong: both Murray and Dreyfuss have made better movies in their careers (A Tail of Two Kitties, anyone?). But What About Bob? is an overlooked gem in both of their work, a descent into madness phrased in the lightest, most summery way possible. It’s impossible to watch the movie and not think Bob Wiley is a pretty decent dude and a blast to be around. It’s also impossible to watch it and not want to strangle him just as much as Dr. Leo Marvin. Either way.