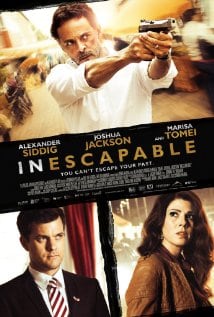 [xrr rating=1.25/5]God bless Inescapable, if for no other reason than that the term “brainless” can now no longer be used so cavalierly when talking about Taken. Pierre Morel’s 2008 film deftly and tightly sketches out a vision of the post-9/11 world so rotten it invites audience investment in a desperate father’s violent quest to save his daughter from it, even as the massive collateral damage of his myopic mission raises the objections of any moral viewer. No one would argue that Liam Neeson’s protagonist is not clearly set up to be the hero of his story, but there are complex insights into his actions and their political context expertly programmed into its lean, generic construction.

Inescapable follows a similar narrative path: a father, Adib (Alexander Siddig), must return to Syria after fleeing it as a betrayed secret intelligence agent when his daughter goes missing in Damascus. There, though, any serious comparison with Taken falls apart, for where Morel operates well within genre boundaries, director Ruba Nadda quickly sets about stripping Inescapable of any genre trappings. Neeson punched, tortured and shot his way through Paris the second his plane’s wheels scraped onto Roissy’s tarmac. Adib does not get into so much as a scuffle until 56 minutes into this 93-minute feature, and his “action” scenes tend to end as soon as they begin.

As a thriller stripped bare by the absence of such scenes, Inescapable has many gaps, which Nadda fills with page after page of interminably stilted dialogue. Every word is so removed from any sense of urgency that major revelations sound no different than the endless waffling of the lolling script. Case in point: Adib rushes to Syria through a few cuts that stress how quickly he can pull strings, only to get bogged down in old emotional baggage with a flame (Marisa Tomei) he left behind. Apparently incapable of multitasking, Adib all but suspends his hunt for his daughter to hash out unfinished business in passionless melodrama. But then, if Nabba could not care less about actually following through on any of the thriller setup, why treat another genre with any more respect?

What’s more, this film has got to feature the most sinfully ugly use of an Arri Alexa by an established filmmaker. Harshly captured light gives nearly every shot a washed-out look, smoothing all texture from Damascus and human faces. Siddig in particular is so scrubbed that his beard does not even look like natural facial hair; rather, it appears as if he slipped a magnet between his teeth and lower lip and dipped his chin into some metal filings. This garish but glossy aesthetic matches the film perfectly: It seeks to dig into the danger happening outside the sheltered confines of the West, but the narrative bounces around so carelessly on surfaces that nothing is ever truly communicated.

By draining Taken of its sadist carnage, Inescapable does not emerge a more moral examination of post-9/11 relations with the Middle East than Taken. In fact, Syria’s subsequent descent into absolute chaos makes the wan social tension on display here almost an abdication of any true engagement with a country well on its way to rebellion at the time of filming. Nadda’s shift of focus from direct action to character drama as a means of explicating international and internal fractures among Middle Eastern nations might have been admirable had her characters ever once behaved like real humans. The listless drone of exposition in service to themes that are only ever name-checked and never put to the test makes for an insipid film that is lazily divorced from its genre so as to avoid any moral contradictions. But we now live in a confusing world, and the only way to avoid saying anything contradictory is to say nothing at all.