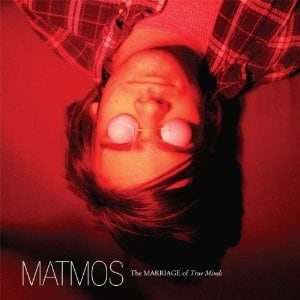 [xrr rating=4.0/5]Now based in Baltimore, MD, the duo Matmos are continually advancing their plunderphonic sound collages. For all those that reside in metropolitan areas, Matmos produce music akin to cities themselves. When surrounded by large buildings and masses of people, simply close your eyes and the environment often has a way of designing its own music: the rumbling of a passing subway serving as the bottom end, the multiple dialogues fusing together for complex harmonies and the pluck of heels offering a steady rhythm. Discovering Matmos, or continually rediscovering the sonic experimentation between longtime couple M. C. Schmidt and Drew Daniel, is like realizing music isn’t just the combination of strings, percussion and vocals, but is a thriving entity that is truly all consuming. The Marriage of True Minds is the newest edition of the 20-year-long Matmos saga, pulling together distorted tap dancing, musique concrete, world rhythms and even some doom metal to combat the blithe of over-popped electronic music.

To write that the release is a communal effort would be an understatement, as many of the record’s motifs arrived following four years of sensory deprivation sessions which saw Daniel attempting to transmit the concept of the album directly to the participants’ minds while barraged with constant white noise. As a sort of crowdsourcing, a research team concurrently asked what the participants experienced and those responses became the de facto guidelines for the studio sessions. At first, that process seems restricting, but with the assistance of members from Nautical Almanac, the Arditti Quartet (“In Search of Faculty”) and the growls of Bloody Panda frontman Gerry Mak, the nine-track release effectively becomes a hypnotic endeavor across the darkness and illuminated beauty that is inherent in most everyone.

Opening track “You” epitomizes this form of transcendent song writing. Originally written by Leslie Weiner and Holger Hiller of Palais Schaumburg, Matmos reconstruct an ethereal rendition based on the manipulated sounds of rubber bands and tap dancing and then lay on whispers of telepathy courtesy of Carly Ptak (Nautical Almanac) over the minimal soundscape. The subtleties of “You” are initially abolished on the Buzzcock-covering “ESP”. Arriving with all the fury of the metal outfit, over 8-minutes the track slowly gives way to sunny riff-rock and the first-ever vocal harmonies between Daniel and Schmidt.

Between these divergent bookends rest more odd-samples than found in the fictional “Crazy Ira and the Douche” radio show on “Parks and Recreation.” “Mental Radio” pairs frantic Latin percussion with the noises of splashing water and the subsequent sirens of an emergency vehicle. The hysterical pace remains the same, but the setting shifts to an American-rock club in “Tunnel,” featuring Dan Deacon. This raucous energy subsides for a moment during the tranquil, bird chirp-sampling “Aesthetic Vehicle,” which transports listeners to the inner sanctum of a Buddhist temple. The cathartic experience of “Aesthetic Vehicle” is best paired with the Ed Shrader psychic sessions embedded within “Very Large Green Triangles”.

Like the greater D.C. area or other major cities, The Marriage of True Minds is best explored in small segments. One wouldn’t expect to know the intricacies of Baltimore during just one visit. The city would continually uncover more of itself the longer one explores back alleys, late-night hangouts, penthouses and bustling neighborhoods. The same notion carries over to all Matmos releases. The duo’s eponymous debut dropped in 1998, but it still offers new insights after each listen. The Marriage of True Minds is sure to continue that legacy.