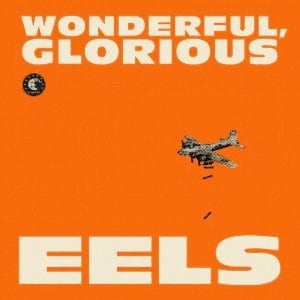 [xrr rating=3.5/5]The bulk of Mark Oliver Everett’s music is defined by tremendously sad songwriting. At its best, as on 1998’s career-defining Electro-Shock Blues, Eels has provided a cathartic outlet for Everett to explore the loss of family members and overcoming grief. On less accomplished efforts, Everett’s dour mood hangs ominously over everything; his knack for melody and taste for curious instrumentation can get lost under all those clouds. For fans that continue to follow every new Eels release, both extremes can be a little exhausting.

Fortunately, Wonderful, Glorious is the first Eels album in a while to forgo elaborate conceptual planning in favor of a much more simple approach, and one that isn’t so dedicated to Everett’s challenging emotional lows. Everett went into the making of this record “with a completely blank slate,” so there’s a lot this album isn’t: it’s not a bookish song cycle, a gangly double album, or the beginning of another trilogy. This time around, Everett’s high-concept whims don’t interfere with the quality of his individual songs, even if there are a fair number of typically sad-sack tracks thrown in.

Wonderful, Glorious also features writing credits from the lineup for the last two Eels world tours instead of just Everett himself, and it shows. These tracks all reflect the idiosyncratic style Eels have explored across 10 studio albums—many of them sounding like popular sister songs on other Eels outings—but they also don’t feel nearly as weighed down as those on his last few efforts that either strain for humor (Hombre Lobo) or are absolutely unrelenting in their morose and poetic self-pity (End Times). Instead, we have a number of tracks that alternate between bawdy fun and the kind of delicate compositions Everett infuses with toy piano and poignant turns from his cigar-singed pipes.

Wonderful, Glorious kicks off with the raucous “Bombs Away.” Everett is raging and done getting pushed around, complaining, “I’ve had enough of being complacent/ I’ve had enough of being a mouse/ I no longer keep my mouth shut/ Bombs away! Going to shake the house.” He sounds as imposing and ornery as the fat sax notes behind those thudding drums and bass-heavy chords. Yet on “True Original,” Everett softly sings an ode to a girl’s perfect imperfections, completely free of vitriol. As he croaks out the song’s building final verse, Everett admits with trembling voice and uncertain cadence, “And if a gun was pointed at her/ I would stand between the bullet and her/ And if not being with me is what makes her happy/ I’d take that bullet too.” Both songs display how perfectly Everett has aged into his voice, a deceptively sweet thing covered by layers of soot and hard living. On “Bombs Away” and the similarly bold “New Alphabet” or “Stick Together,” it sells all the righteous fury; on softer songs like “True Original,” “On the Ropes,” and “Building a Shrine,” Everett sounds weary, a little tired, experienced, contemplative.

The best songs here make it obvious just how zany and textured Eels tracks can be when Everett acts more as stylist, frontman and editor than the band itself. “Kinda Fuzzy” struts along a crazily serpentine series of verse-chorus switch-ups, all of them fueled by some energetic riffage and gravelly, roaring vocals. It’s a sweeping, disorientating rocker that packs one surprise in after another. “On the Ropes” brings back the chugging-train folk from Everett’s Blinking Lights and Other Revelations, a careful boxing metaphor avoiding a series of trite lines in favor of some unexpected wordplay. Near the end of the song he spins out, “Gonna feel so good/ When it’s understood/ Behold the rebirth of my hopes.” That’s a pretty sunny disposition for a songwriter like Everett, especially after 50 rounds. Later, the playful “Open My Present” really goes off on a tangent, Everett bellowing over crackling guitar to sing, “What’s the harm in letting me/ Go no longer living without it!” If the song is the giddy ravings of an eager kid, it’s enjoyably kooky; considering all the talk of little pink bows and ripping the package open, I prefer the much less literal and thoroughly salacious interpretation.

Those pieces of snarling, amped up rock make up the bulk of Wonderful, Glorious, with moments of melancholy and loss balancing the album’s larger tone. That’s a refreshing change for Eels, but there’s more to appreciate about a freewheeling album like Wonderful, Glorious than some fun tunes. For once, Everett has followed his muse to a place that finds him mentally healthy, vital and enjoying himself a little bit. It’s no surprise that the title track sounds like a celebration; Mr. E clearly isn’t partying alone.