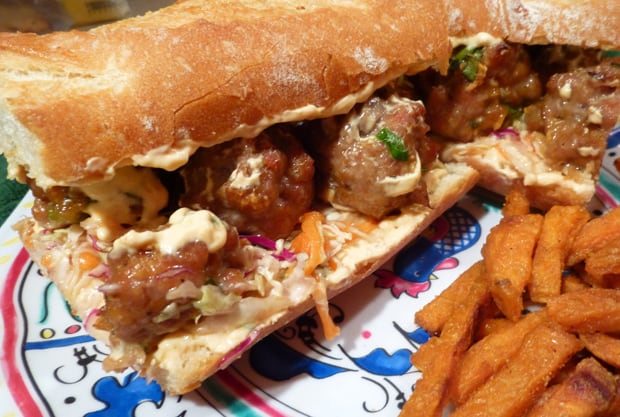 Basil? Really, basil? Such a common herb, so many possibilities. The peppery, parsley-ish with a potent punch herb grows like crazy on my kitchen counter during the summer, and the real challenge is deciding which recipe to share with you. Basil, and its slightly different varieties, is commonly associated here as an Italian cuisine staple. Yes, without basil you don’t have spaghetti—you have a pile of tomato juice. At its most basic, basil is part of that savory Italian seasoning mix that simmers and transforms tomatoes, onions and garlic into marinara. You’ll find basil in any red-sauced pasta, chopped and tossed in bruschetta, pulverized in pesto and nestled into melted mozzarella on Margherita pizza.

But what kind of Twitter Challenge would this be if I just told you to simmer some marinara sauce? I’m here to open up your spectrum of cooking ideas.

Basil’s lesser-known powers in the American kitchen lie in Asian applications. The basil varietal most associated with Italian food is called Sweet Basil, while Thai Basil lends a hand in Vietnamese and Thai cuisines. Sweet Basil is the type most often found in domestic grocery stores, and the flavors are close enough that you shouldn’t kill yourself trying to track down the purple-hued Thai leaves. If you’re cooking during late spring or through the summer, skip the pre-packed bag from the store and buy a starter plant outside. You’ll spend the same amount of money and provide yourself with a renewable source of flavor. Basil plants stay healthy by having their leaves liberally plucked, so place on a windowsill and go to town. During fall and winter, go ahead and buy a fresh bunch from the produce section. The dried variety holds up better to long braises (such as that marinara mentioned up there) since the fresh stuff breaks down and loses its punch when exposed to extended heat, but for our purposes today, you’ll definitely want the most fluffy-fresh leaves you can find.

Vietnamese cuisine is about at the point in our culture that Thai food was fifteen years ago. Your hipster art major friend swears by his favorite dish, and you’ve spotted a few small alcoves with exotic names in your peripheral around town and your Yelp feed. Maybe you’ve even tried it yourself, but it hasn’t smashed into food court prominence. We’ll get there—H&M, beef pho and flying cars. The food of Vietnam is the newest introduction to my palate. In 2004, my college roommate drove me deep into the heart of 82nd Avenue in Portland to try this stuff called “pho”, which seemed at the time to bear an uncanny resemblance to the Cup ‘O Noodles stacked like pallets above my dorm dresser. I didn’t know how to use the plum sauce or Sriracha properly to lend the dish its sweet, tangy, spicy, pungent signature backdrop.

Flash forward seven years (Christ, I’m getting old) to a job next to a family-owned Vietnamese restaurant nestled between a Jo-Ann Fabric and a Dollar Tree. I never gave the tiny crevice a second look until our company receptionist brought in the most delicious-smelling bag of takeout I’ve ever lusted after.

“It’s FUH!” she exclaimed as she ripped basil leaves straight off the stem into her steaming food-envy bomb. The next day, I snatched up a to-go order of my own. The dish has so many flavors and textures going on (Noodles! No, chicken! Brothy goodness! Bean sprouts!?), it makes you dizzy in that I’m-in-love-and-in-Paris kind of way.

A few months later, I discovered a recipe for Bánh Mi sandwiches−Italian and Vietnamese food traditions meeting in sandwich form. There’s the familiar pizza parlor standby meatballs, Asia’s secret-ingredient fish sauce and the bridge ingredient: basil! Basil adds a fresh, spicy tang to this sandwich by hovering in the background. A sprinkle in the meat, fresh chiffonade in the spread and a smidge in the slaw. Like my Vietnamese intro dish, pho, the Bánh Mi isn’t about one ingredient. It’s about a whole collection of carefully-collected ingredients slowly melding together, mingling into an orchestra of fresh discovery and original flavor. Eating a Bánh Mi sandwich is an adventure through crusty, toothsome bread, piquant pickles and tender, irresistibly spiced meatballs. That’s my favorite part of this cuisine: it’s unique, thoughtful and always surprising. It’s like the other, less predictable side of basil. An herb turning over a new leaf. A challenge not in the execution, but in the resistance from eating the whole flipping baguette on your own. Good luck, my friends.

1 tsp each salt and pepper

For the slaw: mix together all ingredients in a large mixing bowl, then refrigerate at least two hours.

For the spread: mix together all ingredients in a SMALL mixing bowl, then refrigerate at least two hours.

For the meatballs: Preheat oven to 350 degrees. Prepare a baking sheet by lining with foil. I like to lay a cookie cooling rack above the sheet to allow the fat to drip onto the foil, but you can place the meatballs directly on the foil as well. Either way. In a large mixing bowl, combine all meatball ingredients and gently stir until well-mixed (don’t overwork the mixture). Using a dough spoon or your hands, form one-inch meatballs and line on the baking sheet about an inch apart. Bake for 25-30 minutes, until golden brown and sizzling.

Remove, and allow to cool while you warm the baguette. Increase oven heat to 400 and warm the baguette for 8 minutes. Remove, and using an oven mitt (don’t burn yourself!), slice the baguette in half. Spread the yogurt spread on both halves, then line the bottom half of the sandwich with slaw. Top the slaw with meatballs, then top with the other bread half and slice. Serve with additional slaw and sweet potato fries, dipped in any leftover spread, of course.

Tabitha Blankenbiller is a Seattle native (and yes, she does like salmon, which tastes better when tossed over the heads of tourists) currently living south of Portland, Oregon. She has an MFA from Pacific University and graduated from the culinary academy of Good Eats episodes and many scorched mistakes. Her favorite ingredient is Secret Aardvark Sauce. You can follow her dining and kitchen exploits on Twitter: @eats_of_eden