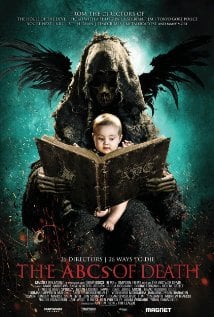 [xrr rating=2.25/5]Anthology films have a built-in flaw. Bringing together a band of distinct, disparate directors and setting them loose on a single concept can yield a fascinating study in the potential breadth of cinema, but it’s just as likely – probably even more likely – to simply end up a clumpy amalgamation of ideas with a distracting variance in quality. Co-conceived by producers Ant Timpson and Tim League (the credits indicate it’s specifically “based on a nightmare” of Timpson’s), The ABCs of Death exhibits all of the natural problems of the anthology approach with few of the virtues, making it a particularly bloody mess. Delivering 26 short films by the same number of international directors, most of them with some level of notoriety in the horror genre, is an admittedly impressive undertaking, even if there’s little beyond the logistics and scale that truly impresses. Each filmmaker was assigned a letter of the alphabet, a modest budget and charged with making a short piece that somehow involves death, with no other editorial direction given or control imposed.

Fitfully engaging at best, the film naturally progresses in alphabetical order, from “A is for Apocalypse” (directed by Nacho Vigalondo) to “Z is for Zetsumetsu” (Yoshihiro Nishimura). Great pains have clearly been taken by many of the directors to create something entirely unexpected, which leads to both a lot of “Twilight Zone” twist endings and an almost pathological need to fill the screen with the sickest stuff imaginable. Horrendous sexual imagery, in particular, plays into a lot of the sequences, sometimes to the point that the effectiveness is subverted because the filmmakers push so mercilessly into unseemly taboos. I get that a key principle of the film is to let the directors do whatever they want without restrictions, but I wouldn’t have minded if someone had suggested to Timo Tjahjanto to tone down the escalating challenge of “L is for Libido” just a tad, especially since it’s one of the more novel creations. Just a little reminder that restraint is one of the qualities of the finest horror films may have been enough.

Killings abound, enough furry creatures are imperiled that “animal lovers” are specifically warned in the film’s intro and toilets play a surprisingly prominent role. Luxurious cinematography is sometimes employed (Bruno Forzani and Hélène Cattet’s “O is for Orgasm”) and occasionally the short bears an unpleasant video hardness that makes it appear as though it was shot with a slightly malfunctioning, outdated smartphone. Multitudes of twisted scenarios march across the screen, with most of them unfortunately getting by on little more than shock value. Nothing particularly rises to announce itself as worthy of interest separated from the conceit of the movie. Often these sorts of cinematic mosaics have at least one piece that justifies the whole (Alexander Payne’s “14e Arrondissement” in the otherwise drab Paris, je t’aime comes to mind), but very little distinguishes itself in The ABCs of Death. Perhaps it’s telling that the short I enjoyed the most was “Q is for Quack” (co-credited to Adam Wingard and Simon Barrett), a meta-deconstruction of the process of making one of the shorts that’s terrifically funny and ultimately far gentler than the fare surrounding it.

Questioning the motives and very sanity of the various directors isn’t an especially sound thing to do, but it’s hard to resist when confronted with the batshit lunacy of “F is for Fart” (Noboru Iguchi), “W is for WTF?” (Jon Schnepp) or “Z is for Zetsumetsu.” Realistically, some of this boils down to a matter of taste. Surely this plays like gangbusters in the sort of sweaty film fests that specialize in grotesquely offbeat fare. There’s an audience out there that will love every lurid moment designed to elicit shocked laughter as much as anything. Ultimately, they’re likely to embrace it as a percolating distillation of everything they want to see. Variety should be the hallmark of a film like this, but including claymation and bizarro sci-fi doesn’t cut it if most of the material is depressingly one-note. Xerox almost any of these and spread it across two hours and the effect will be similar. Yes, I might admire the curatorial ambition of the film and little slivers of inspiration that can be found throughout, but the shortcomings of The ABCs of Death are put into proper perspective by my answer to one simple question: what is the likelihood that I’ll ever want to watch any of these short segments again? Zero.