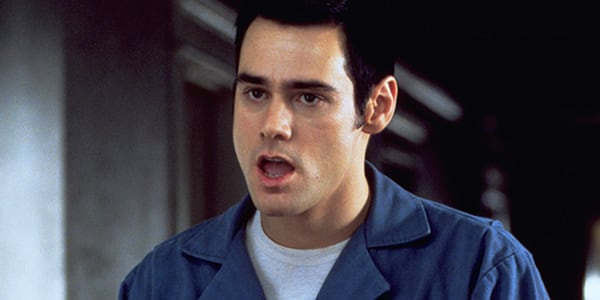 You’d never think it, but The Cable Guy was not a bomb. It didn’t sink Jim Carrey’s career. It didn’t deter him from branching out of loud comedy into more idiosyncratic roles. It didn’t destroy the career of its director, a young comedy scion named Ben Stiller fresh off his debut film Reality Bites and the cancellation of his critically acclaimed, eponymous show. It didn’t do much more than delay the ascendance of producer Judd Apatow into Hollywood kingmaker (that would come later, after a few cancelled television series and uncredited writing roles). The only thing that really took a hit was The Cable Guy’s own reputation. Though it actually made a solid profit at the box office, no less a prominent critic than Roger Ebert called it the worst movie of the year and it has since come to be seen as a bit of stain on the careers of everyone involved. But you know what? Screw that, The Cable Guy is a hilarious, prescient comedy far beyond its time and place.

A big part of The Cable Guy’s false legend as a bad movie is the fact that it was released in 1996, a year in which Eddie Murphy’s foray into fat suits, The Nutty Professor, was the top-grossing comedy, and moviegoers were incensed and confused that Carrey would appear in a movie without literally talking out of his ass. And though Generation X has been immortalized as a generation of people obsessed with irony, history really shows that particular marketing concept as having led more by sarcasm disguised as irony and a fascination for sludgy guitars endorsed by the MTV corporation. As such, the charms of The Cable Guy are far more apparent in retrospect. Although, on the surface, it’s slathered in the trappings of the ‘90s (references to Sleepless in Seattle and Soundgarden abound), it actually looks far more towards the self-aware, pop-culture-obsessed comedies of the next decade.

The film makes much more sense when you realize it’s Stiller at the helm, from a script originally by Lou Holtz Jr., but heavily rewritten by Apatow. Rather than the lighthearted Chris Farley vehicle it was originally envisioned to be, the film became a twisted satire on stalker movies of the time, like The Hand That Rocks the Cradle and Single White Female. But rather than basing its tension on psycho-sexual underpinning, it looks to the infinite promises and disappointments of pop culture, making it more akin to the cult thriller The Stepfather, in which Terry O’Quinn’s titular character attempts to mold people into a “Leave It to Beaver” model of perfection. Similarly, Carrey’s Chip Douglas/Cable Guy bases his entire attempted friendship/stalkership with Steven (Matthew Broderick) on his upbringing by television culture. Stiller’s pitch-perfect skewering of popular entertainment was already apparent from his show, and would become even more apparent with later films like Zoolander and Tropic Thunder. For his part, Apatow was only a few years from gaining acclaim and notoriety for his depictions of emotionally stunted man children obsessed with old television shows and video games. 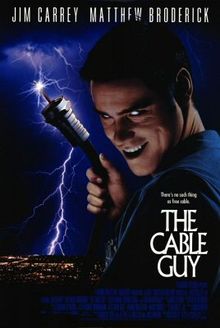 As the lead character, Carrey can be held responsible for much of the blame as well as the praise. As previously mentioned, in 1996, Carrey was just beginning to branch out of the rubbery physical comedy that had made him famous, but The Cable Guy doesn’t wholly step away from that. It’s not Eternal Sunshine of the Spotless Mind; it’s not even Man on the Moon. The genius of The Cable Guy is that it still utilizes the goofy, spastic persona Carrey had built up, but places him in something more similar to real life, in which a person behaving like Carrey does in his comedy would be creepy and off-putting. Rather than using it for humor (and granted, he still is funny), the movie shows the negative side of that persona, the inhuman need for attention and lack of empathy that lurks just underneath. For moviegoers expecting to see Ace Ventura: Cable Guy, it must have been upsetting to see the funny guy suddenly become scary while still going through the same motions.

Aside from Carrey’s performance, The Cable Guy has an almost ridiculously deep roster for a supporting cast. You don’t have to watch it particularly carefully to see future stars like Jack Black, Leslie Mann, Janeane Garofalo and Owen Wilson as a scene-stealing douche on a date, but it’s even more packed than that. David Cross. Bob Odenkirk. Andy Dick. Kyle Gass. Film stalwarts like Charles Napier and George Segal. Even Stiller himself shows up, pre-leading-man status, as a pair of former child stars turned media circus murder trial, a spin on the Menendez Brothers and then-recent O.J. Simpson trial.

But if anything truly sunk The Cable Guy, it was audience expectations. Rather than a lighthearted comedy about a wacky guy fixing the cable, they got a pitch-black commentary on the dangers of obsessively viewing the world through the lens of pop culture. They got an extended sequence of Carrey battling Ferris Bueller in a Star Trek-inspired duel at the gimmick franchise restaurant Medieval Times. They got creepy scenes of spiders running across Carrey’s vacant face, and apocalyptic speeches about the future of the information superhighway (that turned out to be almost implausibly accurate). It’s a movie that succeeds on every level it attempts, from satire to laughs. It’s just not what people were expecting back in 1996.